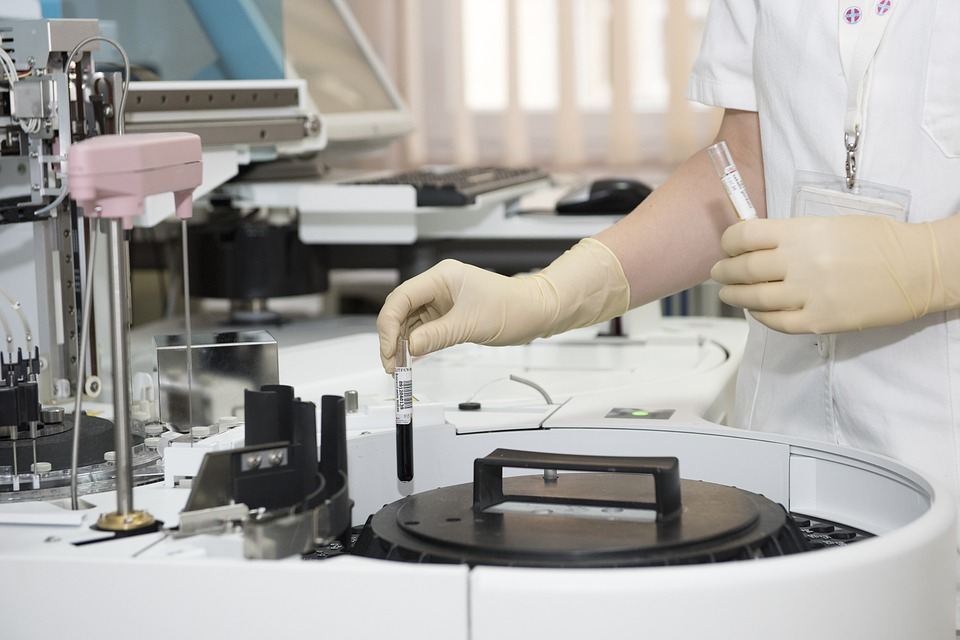 After you spend a few years in this business listening to company conference calls and attending conferences there is something that you become very aware of. You need to take everything that company representatives say with a grain of salt.

The reality is that for company CEOs and investor relations people it is part of their job to sell their company to investors. As a shareholder of a company that is generally what we want these people to be doing.

As investors though, knowing that these people are selling us on their companies makes it harder to truly assess how attractive any given company is as an investment opportunity.

This is why I’ve come to place a significant amount of importance on insider buying, especially at smaller companies. At really big companies CEOs pull down seven-figure salaries and might be prone to buy some shares in that company simply for the purposes of window dressing.

At smaller companies, there is really only one reason for insiders to be buying shares. It is because they think that they represent good value.

Insiders Sent The Message – I Should Have Listened

I actively screen for insider buying. My focus is both on the amount of dollars being invested and the number of insiders buying. Seeing commitment from more than one insider is important in my mind.

My insider screening put Biostage Inc. (BSTG) on my watchlist.

Multiple insiders have been buying over the past six months and the dollar amount is quite significant. As a result of this screen, I added Biostage to my news feed.

This month my news feed brought me some significant positive news about the company.

Biostage announced that its Esophageal Implant (Cellspan) has been granted Orphan Drug Status by the U.S. Food and Drug Administration. 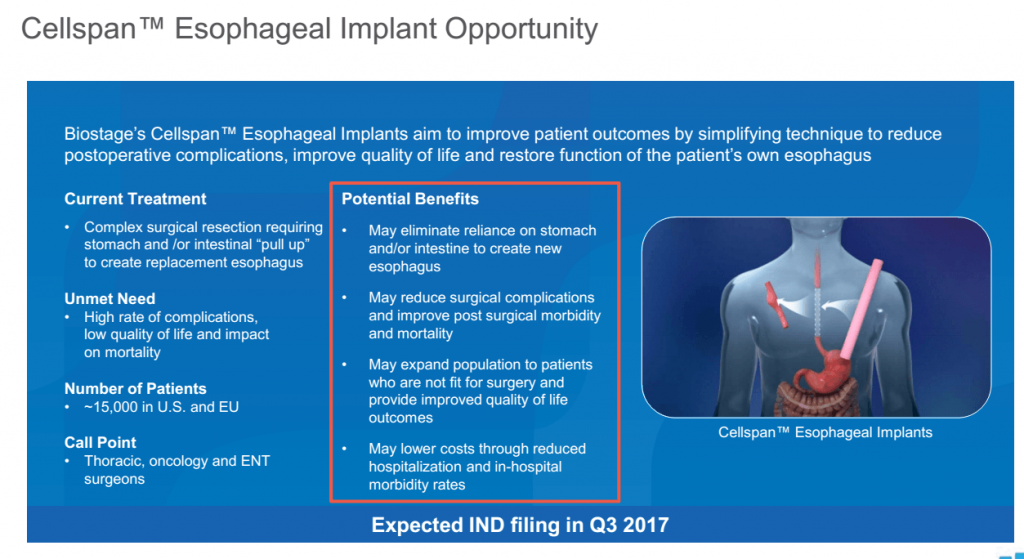 The FDA provides orphan status to drugs and biologics that are intended for the safe and effective treatment, diagnosis or prevention of rare diseases/disorders that affect fewer than 200,000 people in the U.S., or that affect more than 200,000 persons but are not expected to recover the costs of developing and marketing a treatment drug.

The benefits to Biostage of having Cellspan obtain orphan status can include grant funding, tax credits, assistance in a clinical research study, seven years of market exclusivity after the orphan drug is approved and a waiver of the Prescription Drug User Act filing fees (which is $1.3 million in 2016).

All of these benefits are designed to help companies recover the big costs of developing a solution for a rare disease that has an unmet need but a very limited patient population (small market to sell into).

Clearly, this is very positive news for Biostage.

What Cellspan Does And The Disease It Will Treat

Cellspan is a regenerative treatment. Regenerative medicine is aimed at getting the body to restore itself to normal function.

Biostage’s Cellspan is targeted at regenerating and restoring organ function of the esophagus, trachea or bronchus which are damaged by cancer, trauma, infection or congenital diseases. 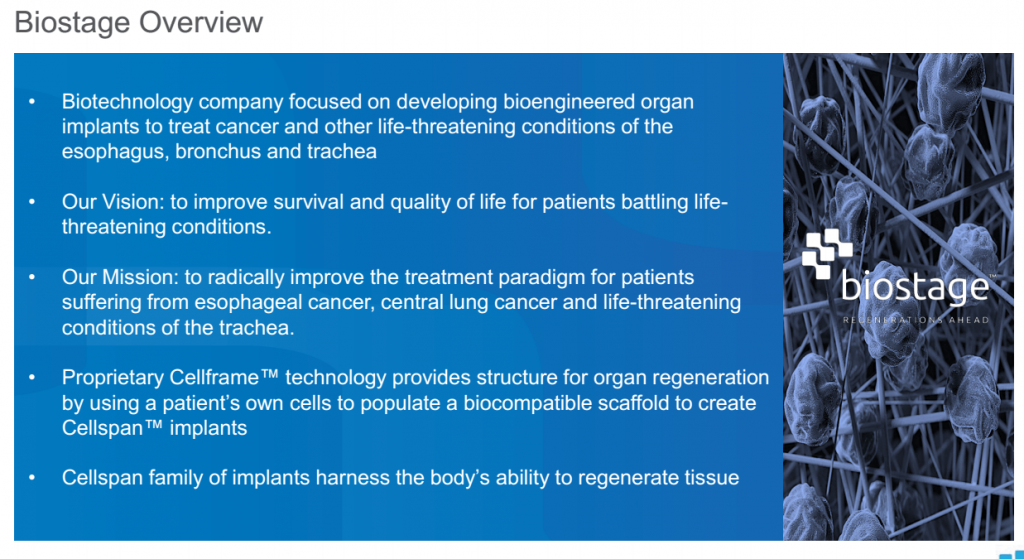 Biostage’s Cellframe technology is designed to get the body regenerate an esophagus, trachea or bronchus that has been damaged by cancer or other cause.

SEE ALSO  How much are traffic jams really costing people?

This could be a very big step forward for the treatment of Esophageal Cancer. The current standard of care for that disease is an Esophagectomy. That is a very complicated surgery that involves repositioning a portion of the intestine into the chest to act as a replacement esophagus.

Not only is an Esophagectomy invasive it also carries a mortality rate that at 90 days is nearly 20 percent. The procedure brings with it the potential for many different life-threatening complications including pneumonia, respiratory failure and leakage of fluid into the chest.

This orphan drug status could be good news not just for Biostage shareholders, but also obviously future patients suffering from Esophageal Cancer.

The current progression for Biostage would expect to see the company look for approval to start clinical trials on humans by the last quarter of 2017. 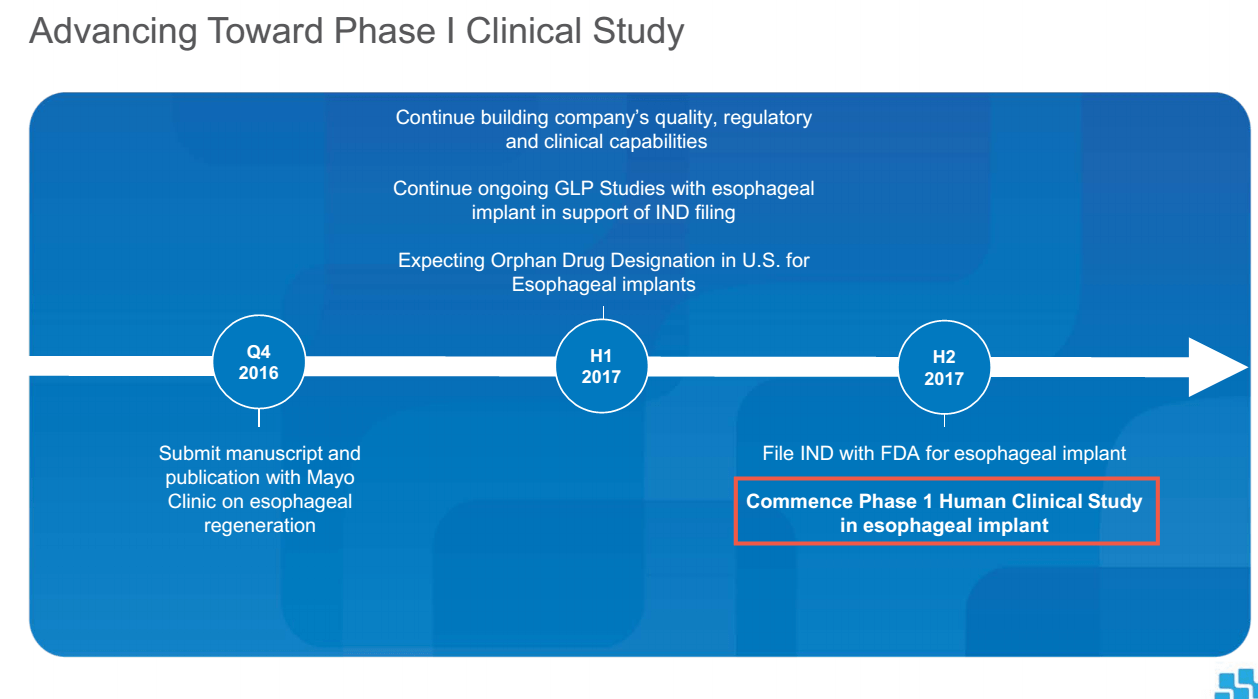 I will continue to monitor the progress of and insider transactions involving this company.