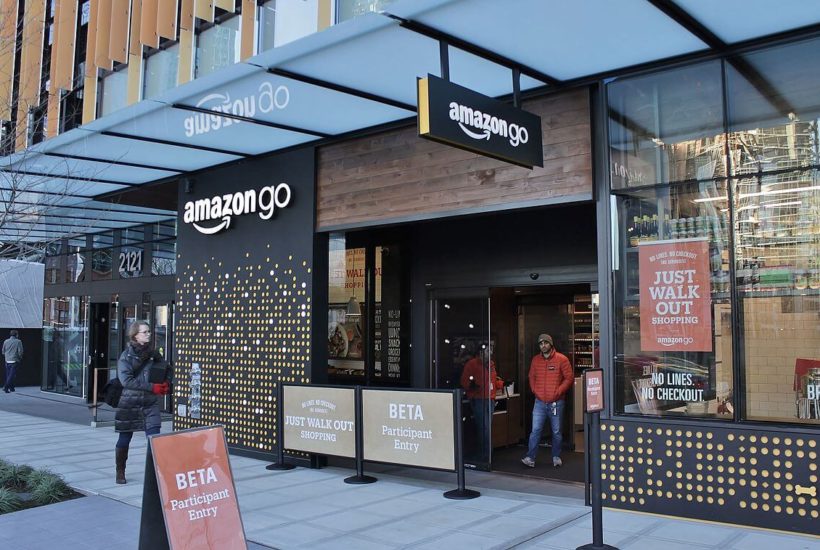 It was just a few years back when we first heard the then outlandish concept of Amazon Go stores. The whole idea of a cashier-free, pick up and walk out shopping experience truly mesmerized retailers and shoppers alike. In no time, everybody was waiting for the beta phase of their first establishment at Seattle to get over so that the official store could be rolled out. That’s exactly what happened in January 2018. Soon after, a few more stores were rolled out last year.

Anyone who visited the Amazon Go stores couldn’t help but feel that the whole experience was unprecedented and in many ways unbelievable. While that’s true and there is no denying the marvel that it is, a lot of speculation has suggested that it might not be all that overwhelming after all. Most of these derivations are either the result of a detailed break-down analysis of the technology and its utility by industry experts, or the state-of-the-art counter innovations by perfectly worthy competitors. Now, many would say it’s tough to compete with Amazon. But, that’s the thing. Amazon with its “Go stores” left retailers with no choice but to think of ways to incorporate the cashier-less way of shopping. Surely something worth notice beckoned.

Now before delving deep into what Caper has to offer, let’s review a few of the speculations about Amazon Go. For the lack of a better word, let’s call them the limitations of Amazon Go.

It would take a brave perspective to refer to Amazon Go as limited. After all, it still stands as one of the biggest retail technology breakthroughs of the decade. But such is the nature of facts – apparent and thought-provoking.

Cost: Amazon Go stores are installed with high-end sensors and cameras throughout the stores which are expensive, to say the least. The hardware cost for just one store is reportedly $1 million. Over the next few years, Amazon has plans to launch about 3000 stores. If I do the math, it comes to $3 billion. The next point will elucidate why this is a big limitation.

Size: We know now the relative cost of one Amazon Go store is $1 million. But that’s for a 1,800-2,400 square feet area. Amazon Go, for now, has been rolled out as just a convenience store where people can just come in, grab whatever little things they need, and leave. Now the question is, “Is it prospective for Amazon Go to just remain a small convenience store?” The cost of their hardware and technology will in many ways limit them from deploying the technology in big 30,000 square feet supermarkets. Caper is a little different.

SEE ALSO  How COVID-19 has changed the VC landscape

Prospect: Amazon Go is still a relatively fresh concept for many and at first sight, all seems hunky dory. But the craze will end. For shoppers, it’s like buying a new phone. In the beginning, it’s all about the new phone till the time something better or just different comes out. The question is, “How much will time-crunched shoppers visit these stores if it’s only restricted to being a convenient store?” They can just walk into a supermarket and get whatever they want all at once. Besides, there is the loyalty equation that shoppers have with retailers. Is a cashier-less, premium, and grocery-only store enough to force shoppers out of their loyalty store? I am not too sure.

Utility: Let’s say shoppers do arrive at these stores for bulk grocery shopping. Yes there won’t be a cashier. But are the week long grocery items automatically going to pack themselves in a bag and onto the car? No. This part is still very much manual. So essentially, Amazon Go is all about just the automation of payments. Utility wise then, is Amazon Go truly that overwhelming?

Let’s answer that once we know what the Caper shopping cart has to offer. Let’s dive right in.

Keeping the above Amazon Go limitations in close context, let’s see what Caper has to offer. Caper is an artificial intelligence powered shopping cart (first of its kind) leveraging computer vision that enables shoppers to avoid check-out lines. All shoppers need to do is pick up the items that they need and drop them in the cart. In-built sensors will automatically identify the items and calculate the amount on a virtual basket. On a visual level, the interactive screens fitted on the cart assists customers by providing them a list of recommended items based on what is already there in the cart. Shoppers can also stay updated about discount coupons and avoid check-out queues by making their payments on the interactive screen itself.

Unlike Amazon Go, retrofitting this technology in large supermarkets is not going to be an obnoxiously expensive affair. Whisper going around is that soon the Caper Cart will be augmented with voice technology that will interact with the shoppers in human language throughout the entire course of their journey. This will further add to the overall customer experience.

In this age of automation when brands and retailers are still coming to grips with the AIs, ARs, and VRs of technology, what Amazon has already achieved with its Go stores is truly worth a lot of accolades. But if things are to be looked at rationally, one might ask: are the offerings coming at a justifiable price? Besides, apart from a cashier-free and a potential “Get in, Grab some, and leave under 60 seconds” experience, what else does it have to offer. Is sizeable expansion at all feasible with so much cost involved? Furthermore, how long will people be crazy about the Amazon Go experience anyway? And with Caper Carts offering the same benefits in although a less flamboyant but mighty rational and cost-effective way, the road ahead for Amazon Go does appear to be a little tricky.

What the AI-powered Caper Cart has done is it has given other retailers the belief that even they can stand up to Amazon and see eye to eye. To be honest it’s not about matching Amazon Go blow for blow, but actually being focused on how to better serve customers by enhancing their in-store experience. That way it might so happen that new and upcoming retailers hit the news before Amazon does. Yes, the idea is to provide customers with a one of a kind shopping experience consistently, but to what extent? Taking nothing away from Amazon Go, but if something relatively cost-effective and minimalistic in nature (at least from the glamor point of view) as Caper Carts at full flow is good enough to put all existing customer grievances to rest, then wouldn’t it be fair to say that they are just as effective as Amazon Go? It probably is and it’s just a matter of time before people realize it.

Who knows? Maybe in the time to come, Amazon Go will surprise the world once again by churning out something outlandish. But for now, keeping all the above facts and figures into perspective, I firmly believe that they will soon have a lot of competitors following the footsteps of Caper shopping Cart.

Aditya is the founder of Digital Polo a unique design company that provides unlimited design work for a paltry fixed fee. Branding is simple if you know your way around the design bit of it. Through Digital Polo, Aditya has provided ample reasons to brands across the globe to buy into this claim.