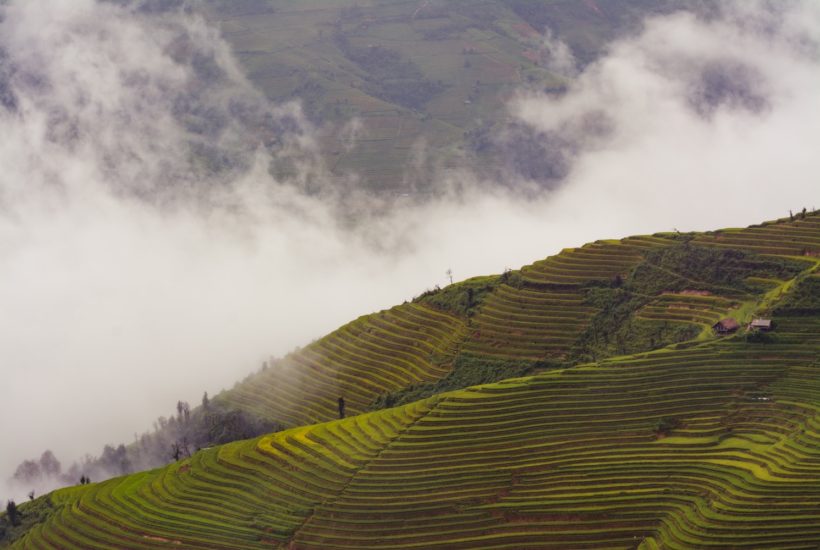 Wheat markets were higher for the week. The Coronavirus and stay at home orders in many states have created a rush of buying of Wheat products and have caught the mills short bought. They have been very active in buying Wheat in domestic cash markets, especially in the Great Plains, and basis levels have moved sharply higher.  USDA on Friday announced that China had also been active in the US Wheat market and had bought its first loads of HRW since 2017. There was a lot of bullish demand news for the market to absorb. Trends turned up in US Wheat markets last week and it is possible that the buying could continue this week. No one really knows just how long the Coronavirus related buying will go on and just how short the domestic mills are. Prices will correct lower once the mill buying is done but should hold above recent contract lows as the dynamics of the market have changed. The domestic buying is one part of the puzzle and it remains dry in parts of Russia. No one is talking about losses yet, but the situation should be monitored as losses will become very possible unless it starts to rain soon.

Corn closed lower as the shock and awe tactics employed by the Saudi Arabian government hurt domestic ethanol production. Prices for Crude Oil and also gasoline and heating oil are at extremely low levels right now. The Saudis are using the cheaper price to punish Russia for balking at cutting production a few weeks ago but also to eliminate competition from shale oil producers in the US and Canada as well as biofuels producers around the world.  Saudi moves have helped to destroy the Corn market here in the US. The loss in ethanol demand inside the US is so large that even a major purchase of US Corn by China did little to create any lasting buying interest. It has turned into a disastrous situation and one for which the US government has no real answers to give Corn producers here. The US will need to find a way to convince both sides in the dispute to back off and allow the US market to attempt to return, but so far no one is willing to listen.

Soybeans closed higher after a move to new lows during the first part of the week. Soybean Meal moved sharply higher. Both markets were supported in part by the lack of ethanol production here in the US.  Little or now ethanol production means little or no production of DDG as well, so a potential competitor to Soybean Meal in domestic and world markets has been effectively removed. Logistical problems caused by the Coronavirus in South America also played a major roll in the rally. Argentina and Brazil moved to shut their borders to traffic last week.  Exports are not supposed to be affected, but there are signs that transportation inside the countries has become very difficult. For example, one port town in Argentina has closed itself off to all port traffic including trucks bringing Soybeans and products to the port. The US is still selling and shipping normally and has gained the upper hand for any loads China or anyone else might need to buy.  This comes even with the US Dollar index at extremely high levels against major world currencies and against the Real and Peso. The US is still the best and most reliable shipper and is expected to capture a lot of business going forward.

Rice was sharply higher and made new contract highs on Thursday before collapsing on Friday to close near the lows for the week.  Futures were still higher for the week but the Friday selling seemed to indicate the end of the current bull market. Mills and speculators were early week buyers and producers and speculators were sellers on Friday.  The domestic situation remains tight and sales to western countries have been generally good although not so strong in recent weeks. Some producers are selling the next crop and some significant hedge selling has been seen in new crop months in futures.  Demand for US Rice remains generally positive and the export sales pace, in general, has been very good. The US domestic market is now quiet.

World vegetable oils markets were mostly stable last week.  Palm Oil and Soybean Oil were content to trade in ranges at or near recent contact lows. All markets are still factoring in potential demand changes and the demand outlook for biofuels is poor. However, there are logistical problems as well, including loading problems everywhere, but especially in Argentina due to the closure of the borders and the inability of Malaysian and world producers to get tankers due to previous logistical problems caused by the Coronavirus. It is becoming an increasingly dire situation with most of the containers and tankers in China but not moving due to Coronavirus fears. Canola has been firmer due to the collapse of the Canadian Dollar against the US Dollar last week.

Cotton was sharply lower last week and made new lows for the move on the weekly continuation charts. Much of the selling was related to lost demand potential due to the Coronavirus and the extremely weak petroleum prices. The Coronavirus has the chance to hurt trade in Cotton between the US and China.  Chinese buyers might need less Cotton now as factories inside their country were closed for an extended holiday. All are reopened now, but the manufacturing pace has been slow. China has also been slow to buy products from Southeast Asia and demand for US Cotton has been hurt in the entire region. The weakness in Petroleum futures comes from the moves by Saudi Arabia to ramp up production just at the time when the world economy is slowing down. The threat of a worldwide recession is very real. The strong US Dollar hurts trade anywhere and pushes buying to alternative growths like Brazil.

FCOJ was higher for the week on logistical considerations here in the US and in South America. Traders are wondering if workers are around to man the plants here in Florida and in Brazil. In addition, there are not enough tankers or containers around for shipping the product to buyers. Pickers are not going out into groves to pick the fruit for fear of getting too close to affected fellow workers and catching the Coronavirus disease. There is a big crop of Oranges out there with not many outlets for consumption. Good growing conditions and increased oranges production estimates by USDA this season have been bearish. The weather has been great for the trees as there have been frequent periods of showers and no severe storms so far this year. Many areas have been dry lately and irrigation is being used. Crop yields and quality should be high for Florida this year. Inventories of FCOJ in the state are high.

Futures were higher in New York and slightly higher in London.  It was a wild week of trading in New York as the market wrestled with various factors.  Support came from a lack of supply in Brazil at this time and on concern that previous bad growing conditions have hurt production potential in the Cerrado, home of about 10% of all Brazil production.  Many producers and exporters have run out of Coffee in storage to sell. In addition, containers are bottled up in China and are increasingly hard to find for shipping in most Coffee exporter countries.  The chart trends are up in New York and mixed in London due to big production ideas. Rains were reported in Brazil Coffee areas over the weekend and showers are continuing through this weekend. It is dry in other parts of Latin America.  Central America has had less than normal rains, especially in Honduras. The Asian harvest is underway but producers do not seem to be selling on ideas that prices are too low. Vietnam exports remain behind a year ago, but the market anticipates bigger offers.  Vietnamese crops are expected to be big despite uneven growing conditions earlier in the year. Growing conditions are uneven again this year as it is dry in many growing areas. The Real lost once again to the US Dollar Index and remains very cheap.

New York and London closed sharply lower again last week on the back of weaker petroleum futures.  The weaker petroleum futures make higher-priced ethanol that much more expensive to blend and cuts demand. That makes more Sugarcane available for processing into Sugar. The Brazil mills are trying to cover the lack of White Sugar in the market.  Reports indicate that little is on offer from India. Thailand might also have less this year due to reduced planted area and erratic rains during the monsoon season. Reports of good weather in Brazil imply good crops there. Farmers have been selling to mills but the harvest is now almost over so the supplies will start to tail off.  Brazil mills continue to favor ethanol in the production mix, but current higher prices for Sugar make it economic for more processing to Sugar instead of ethanol at this time.

New York closed lower for the week and trends remain down on the weekly charts. London closed higher and trends are mixed. Harvest is now over for the main crop in West Africa and the results so far are very good.  Ideas are that demand is currently strong but less than before. The reports from West Africa imply that a big harvest is possible in the region. Ivory Coast arrivals are strong and are above year-ago levels. The weather in Ivory Coast is good. The weather is too dry in Ghana and Nigeria and there are fears that the mid crop is not developing well at this time.