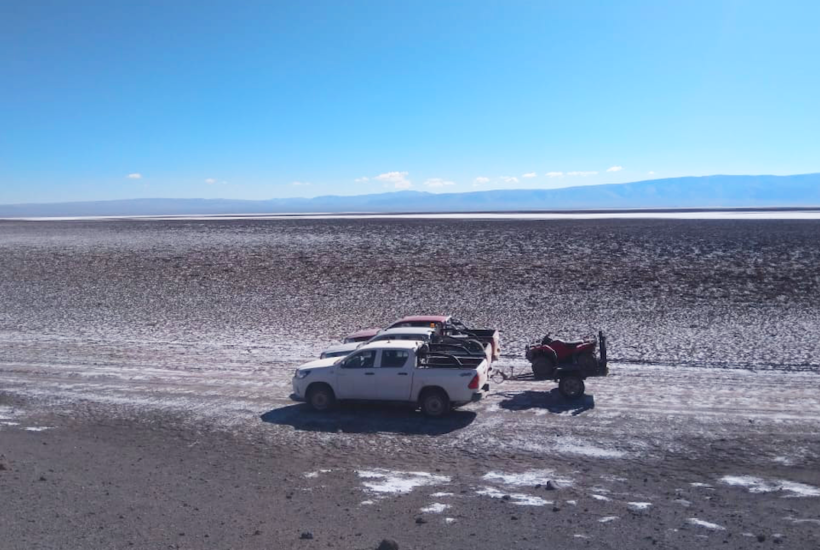 We’ve all known about the importance of lithium in the global green revolution for a while now. Everything from electric vehicles to alternative energy generation is dependent on vast banks of energy storage cells, and there is simply no better alternative than lithium batteries right now.

However, what might have been lesser-known was just how critical our dependence on it was.

In any case, any remaining doubt about it should be long gone by now. Lithium has already more than doubled in the first months of this year alone, and it is still hitting record-smashing highs on an almost-daily basis. And the demand driving these prices is only set to intensify.

For proof of this, we don’t need to look much further than the current push toward electric vehicles. Last year alone, pure EV sales in the US jumped 86%; hybrids jumped a massive 138%. And forecasts predict this exponential growth in electric vehicles is only going to grow.

Exacerbating this all, we also find that governments worldwide are doing everything they can to promote further growth in EVs. Most recently, President Macron has made affordable EVs a cornerstone of his re-election campaign in France — a commitment he has restated on numerous occasions, including in his speech following the first round of election results just this week. Then there’s also Biden’s $5 billion plan to build EV infrastructure and charging stations — the sort of infrastructure that only further promotes the adoption of electric vehicles amongst both consumers and business operators.

But, as great as all of this is for electric vehicle manufacturers and the future owners of their vehicles, there still remain some unanswered questions. Chiefly: if supply is already so limited, where is all the lithium needed to power this revolution going to come from?

A great place to start would be the so-called Lithium Triangle in South America.

Located in the southwest corner of South America lies a geographic triangle of lithium resources beneath the salt flats so highly-concentrated that, according to a 2021 USGS Mineral Commodity Summary, it contains approximately 58 percent of the world’s lithium resources.

Let’s repeat that one more time: 58 percent of the world’s lithium resources are confined to a single geographic area in South America.

The triangle itself crosses the borders of Argentina, Bolivia, and Chile, and it is estimated that Bolivia is sitting on around 21 million tons, followed closely by Argentina with 19.3 million tons, and then Chile, with 9.6 million tons.

SEE ALSO  What are the disadvantages of a robo-advisor?

Argentina Lithium and Energy Corp Is on the Hunt

Of course, lithium sitting in the ground is of little value to anyone unless the reserves are properly surveyed and developed. This is where Argentina Lithium and Energy Corp. (TSXV: LIT | FSE: OAY3 | OTC: PNXLF) comes in — a company that is now planning a new hunt for the “white gold” that is such a crucial component for rechargeable batteries in electric vehicles, as well as overall renewable energy storage.

To conduct the hunt, Argentina Lithium and Energy Corp. is conducting deep-seeing Transient Electromagnetic (TEM) sounding surveys along a 39-km stretch in the lithium triangle ­– a geographic area that straddles Argentina, Bolivia, and Chile.

Leading the hunt will be Miles Rideout, the company’s Vice President of Exploration — a highly experienced lithium mining executive with over three decades of mining exploration experience in South America. He has also directly managed the acquisition and exploration of dozens of lithium properties in northern Argentina.

Speaking on the importance of the survey, Ridout stated, “This survey at Argentina Lithium’s Rincon West Project is among our top priorities to scout for and acquire properties which have the potential to host lithium deposits.”

To this, Argentina Lithium President and CEO, Nikolaos Cacos, adds, “acquiring advanced sub-surface resistivity data at the Rincon West Project will provide vital information on the lithium potential and extent of brine within the property. With these data in hand, we expect to quickly move to drill testing the project to validate the targets, and to assess grade and estimates of brine content of the host formations.”

Argentina Lithium Delivers Investors with a Host of High-profile Projects

Argentina Lithium and Energy Corp. is part of the Grosso Group—a resource management team that has pioneered the mineral exploration industry in Argentina and has operated there since 1993—which has made four major mineral discoveries in Argentina over the last 25 years. Two of these are now operating mines.

The company’s 2,370-hectare Rincon West Project is located adjacent to the large and recent Rio Tinto acquisition of the Rincon lithium project for $825 million. This acquisition, which mirror’s the priorities of Argentina Lithium, demonstrates Rio Tinto’s commitment to building its battery materials business and strengthening its portfolio for the global energy transition.

Argentina Lithium’s other projects include the following:

SEE ALSO  Why you should avoid buying Instagram followers

As much as Argentina Lithium’s focus is on bringing much-needed lithium supplies onto a starving market, the company is quick to point out that its project comes with additional benefits, especially for the communities in its operational area.

Here, Rideout notes, “While creating a cleaner energy future, these projects will also greatly assist the isolated and depressed communities of the region. Lithium resource development is a huge step forward for the families living in these areas.”

The company also brings with it decades of commitment, consultation, and collaboration with communities and local governments, making it a known and trusted responsible mining exploration company in the region. Their practices form part of the company’s vision and day-to-day actions to foster long-term relationships with communities, local governments, and all stakeholders through responsible sustainable practices.

To learn more about Argentina Lithium, visit their website here.