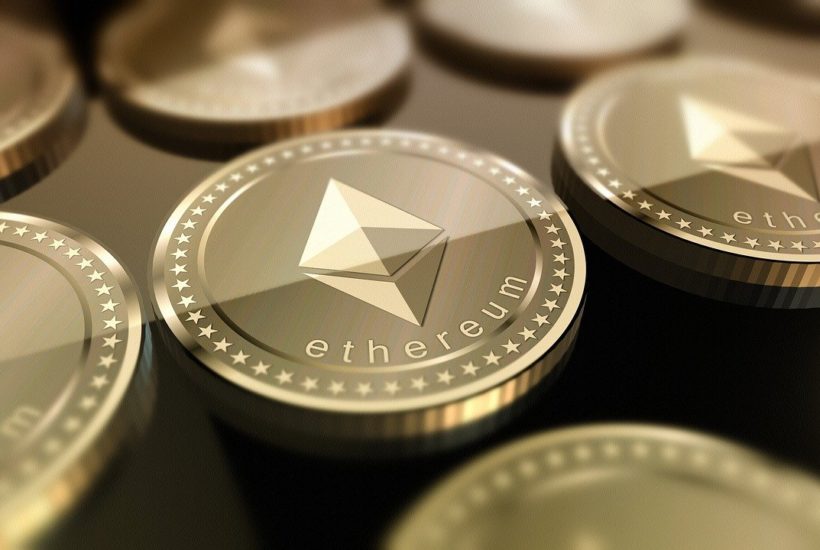 The Ethereum price is moving against the USDT in a formation that could lead to the ETH price reaching a level last seen in June 2018. So is the Ethereum price close to a breakout? There are several indications that this is the case. Let’s take a closer look at which of these are in this analysis.

Find more details about the Ethereum course and read the latest business headlines with the Born2Invest mobile app.

Anyone who has ever taken a closer look at technical chart analysis knows that resistance turns into support and vice versa. In the Telegram Channel of Bitcoin-Bude.de a series of charts was recently posted, which indicate that this is currently the case with the Ethereum rate against the USDT. The trend line in question served as a support from August to September, then became a resistance for the following 2 months and seems to have re-established itself as a support line for the past few days.

The more points of contact a trend line has, the more significant is its significance. Since this trend line has been the pivot of the Ethereum price for almost 4 months, its importance for the coming price movements should not be underestimated.

ETH price in a pennant formation

However, that is not all. The Ethereum price is also currently trading in a pennant formation. At first sight, this may look like a symmetrical triangle formation for many, but such patterns usually have a minimum duration of 3 weeks. The price of Ethereum acts however only its well 3 days in this pattern. Therefore this formation is to be classified as a pennant.

A pennant formation is a short-term consolidation pattern that is said to appear on half of a larger movement, just like a flag formation. During formation, a declining volume is usually observed and the pattern is preceded by a steep price rise in its bullish version. As the figure above shows, the Ethereum course fulfills all these characteristics of a flag formation.

Ethereum price on the way to its 2-year high?

To calculate the minimum price target in a pennant formation, one measures the previous movement and projects it to the end of the formation. If you do this in the case of the Ethereum course, you get a minimum target price of just under $500. This would correspond to the highest price level for ETH since June 2018.

SEE ALSO  Is cannabis legal in Italy? The answer is complicated

However, from a statistical point of view, pennant formations show an error rate of 24%. This means that 1 of 4 pennant formations fail and a bullish resolution does not occur. Furthermore, the minimum price target is also only reached or exceeded in 58% of cases. Accordingly, this forecast for the Ethereum course should be taken with caution.

But not only on the technical Chartanalyse are there bullish indicators for ETH. Fundamentally, the number 2 cryptocurrency is stronger than ever and that for good reason.

The launch of Ethereum 2.0 is approaching

As already reported, after months the Ethereum Foundation officially announced the date of the deposit contract for Eth2 Phase 0 and specified the Genesis event of the Beacon Chain Mainnet in an update of November 4th.

According to Danny Ryan, one of the main developers, Phase 0 will start on December 1st, 2020, provided that several conditions are met. More specifically, the first phase will begin one week after the minimum threshold of 16,384 32-ETH validators is reached. Therefore, in order to meet the start date of December 1st, this number of ETH validators must be reached one week before the date. If not, the start will be postponed accordingly.

The co-founder of Ethereum, Vitalik Buterin, has itself from its private Wallet already about 3,200 ETH in the equivalent of scarcely 1.5 million dollar into the Staking contract deposited.

Open interest in ETH options at an all-time high

In addition, the open interest in Ethereum options on Sunday, November 8th, reached a new record high of over $570 million. The last time open interest approached this level was on September 1st, when it reached $544 million.

Greg Magadini, CEO of the data aggregator Genesis Volatility, says that the progress of the Ethereum network in moving to “2.0” has led to options traders increasingly anticipating the event from the official launch of Ethereum.

On the night of the U.S. elections, we saw the silent release of the ETH 2.0 depot contract. As we got closer and closer to the start of Phase 0, the excitement triggered an increase in the trading volume of ETH options last week.

As an interesting study on the 10,000 richest ETH addresses shows, the entire crypto sector has been preparing for this event for months. It is therefore very likely that the Ethereum course will show its volatile side once again before the official launch of ETH 2.0, where positive price developments can be considered probable.

(Featured image by elifxlite via Pixabay)