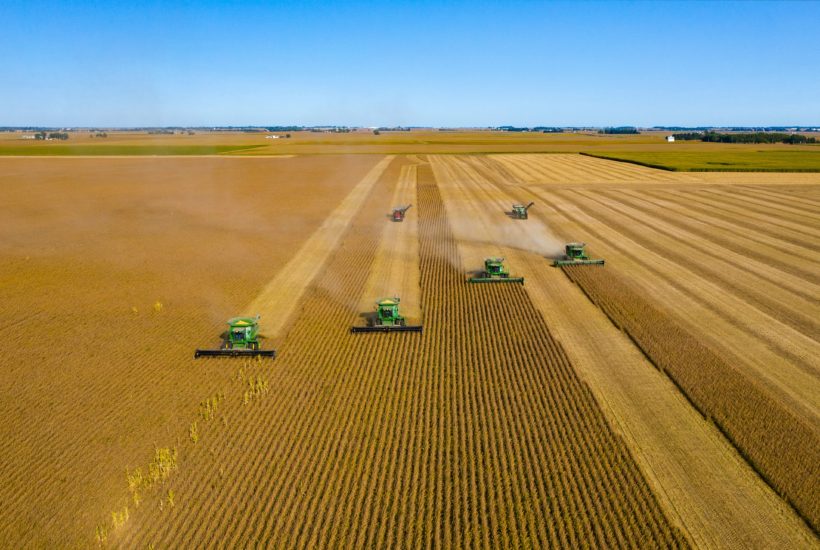 Winter Wheat markets were mixed, with SRW a little higher and Minneapolis lower. HRW prices were near unchanged. The charts show that more moves higher are likely over time. World prices have held steady or worked a little higher even with additional Russian supplies available to the market. Australian supplies have also increased as its harvest is moving forward. US weather is mixed with good conditions in the majority of the country but still dry conditions in the western Great Plains. Southwest Kansas and southeast Colorado remain the driest. It was warm last week. Parts of eastern Ukraine and southern Russia are getting some showers too. These have been late to help much with the establishment but will help with soil moisture into the Spring. Western Australia’s conditions are improving after some recent rains. The demand has held well and world prices remain high. The market in Russia has remained high on limited supply as farmer hold the Wheat back due to the drought.

Corn was higher last week in reaction to ideas of strong export demand and reports of dry conditions in South America. Futures tested recent highs for the move on the weekly charts but did not really make new highs. US weather was great for harvesting last week with warm and dry conditions for much of the Midwest. Yield reports have generally been good except for the drought and derecho areas of Iowa. Ukraine has been in drought and southern Brazil, Uruguay, Paraguay, and into northern Argentina have also experienced drought. The drought is especially serious in South America for the first Corn crop but the second crop could also be affected due to late planting in central and northern Brazil. Dry weather has delayed the Soybeans planting and that will delay the second Corn planting later. Farmers will not plant if it gets too late in the year as the rains will shut off before the crop gets home.

Soybeans closed higher and Soybean Meal closed a little higher on the warm and dry weather in South America. Production potential is being threatened there due to the lack of rainfall. The situation is most serious in southern Brazil and on into northern Argentina, but it is starting to turn drier again farther to the north. The world will need very strong production from South America to meet the projected demand. The stocks to use ration for Soybeans is now very small and the situation is the tightest projected in years. Higher Soybeans prices are likely. China has not appeared in the daily sales announcements from USDA in over three weeks except for one time, but the country was once again a significant buyer in the weekly export sales report. China still needs to buy for crushers, but appears to have bought what was necessary for the reserve. The weather in the US is good for any remaining harvest as it was drier last week.

Rice was higher last week in range trading. The cash market is slow and the lack of business is reflected in futures volumes traded. Reports indicate that domestic demand has been poor to average with better consumer demand more than offset by much less demand from schools and other institutions. The harvest is mostly over in northern states with good field yields reported. Southern Louisiana and Texas are harvesting the second crop and yield reports have been good. Quality is said to be very good everywhere. The USDA reports issued a couple of weeks ago showed a little less yield and production and less export demand for long grain. Ending stocks were increased and are high.

Palm Oil closed lower on ideas of weaker demand. Palm Oil prices are relatively high right now so importers are looking at importing Soybean Oil instead due to cost and quality. Chart trends are still up.  It is seasonally a time for trees to produce more due to more regular rains. Getting workers to do the harvest remains hard and the lack of labor has been a big problem. Soybean Oil and Canola were higher on weaker US and world production estimates and strong demand ideas. Very strong Palm Oil prices have made buying Soybean and Canola oils the better option. Trends are up in Soybean Oil and in Canola. Demand for Soybean Oil has improved in recent weeks. Canola farmers have reduced selling by now so demand is chasing after fewer supplies.  Harvest in the Prairies is done and yields are reported to be very strong.

Cotton closed higher but held the recent trading range last week. The weather has improved after a couple of hurricanes hit the Delta and Southeast. It remains dry in West Texas. Harvest is ongoing so increased rains now can only delay things and not improve conditions much. Reports indicate that some Cotton could have been damaged in Georgia and the Carolinas and into eastern Virginia due to the excessive rains caused by the hurricanes. The rains and winds could have damaged fiber and blown fiber out of the bolls. The weekly export sales report showed weaker demand last week. Demand should stay generally weak as long as the Coronavirus is around, but the recent announcements of vaccines to become available helped support better demand ideas. Ideas are that economic activity will greatly improve once the vaccines become readily available in several months from now. India is also harvesting under what appear to be good conditions. Good production is expected.

Frozen Concentrated Orange Juice and Citrus: FCOJ was higher again last week and is starting to get close to weekly chart highs. Florida has been spared any hurricanes or other serious storms this year in a year that has been very active for tropical storms. The Coronavirus is still promoting consumption of FCOJ at home. Restaurant and food service demand has been much less as no one is dining out. The weather in Florida is good with frequent showers to promote good tree health and fruit formation. Brazil has been too dry and irrigation is being used. Showers are falling in Brazil now and these need to continue to ensure good tree health. However, it could turn warm and dry again next week. Mexican crop conditions are called good with rains.

Futures were higher last week in New York, but lower in London. It has been a weather market. London had been better supported due to stronger demand ideas and worries about the weather in Vietnam as the country is getting too much rain now and flooding is being reported in the Central Highlands. The rains finally started to end last week as the typhoons seem to have gone away.  Central America has seen a couple of hurricanes that could have damaged crops. These systems have now departed the region. The demand from coffee shops and other food service operations is still at very low levels as consumers are still drinking Coffee at home. Reports indicate that consumers at home are consuming blends with more Robusta and less Arabica. The Brazil harvest is over and producers are selling due to the recent extreme weakness in the Real. Ideas are that production is very strong this year as it is the on year for the trees. Central America is also offering right now and offers are increasing. The weather is good in Colombia and Peru.

New York was a little higher and London closed near unchanged. Both markets made new highs for the move. Unsettled Brazil weather has been a problem. It has been dry in south central Brazil and the production of cane has been affected. Brazil mills have been producing more Sugar and less Ethanol due to weak world and domestic petroleum prices. About 45% of the crush this year will go to Sugar, from 35% last year. Rains are falling now to improve Sugarcane growing conditions.  India has a very big crop of Sugarcane this year. The Indian government has not announced the subsidy for exporters of Sugar so no exports are coming out of India yet. Sources told wire services that any subsidy will need to be significant to get export sales on the books. Thailand might have less this year due to reduced planted area and erratic rains during the monsoon season. Rains are moving through the country now from Vietnam and the Pacific. The EU is having problems with its Sugarbeets crop due to weather and disease. Coronavirus has returned to the US and Europe and has caused some demand concerns.

New York and London closed sharply higher. The move came as importers look to find a way to source Cocoa without paying a premium demanded by Ivory Coast and Ghana. Both countries have instituted a living wage for producers there and are looking to tax exports to pay the increased wages. The harvest for the next main crop is almost done for much of West Africa and very strong production is expected. There are a lot of demand worries as the Coronavirus is making a comeback in the US. Europe is also seeing a return of the pandemic. The North American and European cocoa grinds were at least 4% lower than a year ago and the Asian cocoa grind was down 10% from last year.