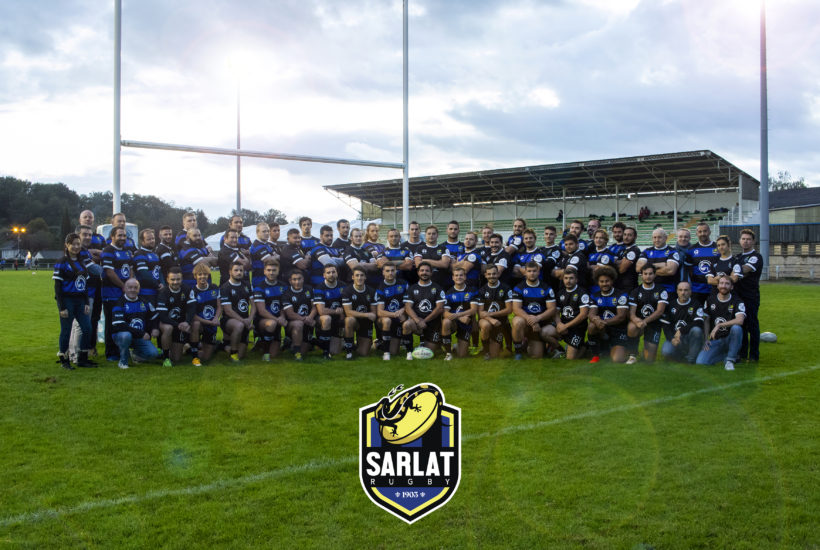 The winds of change are blowing through Madrazès, the ancient Rugby sanctuary of Sarlat. It is knocking the berets off the oldsters and firing up the youngsters. “What’s this American doing?” you can sometimes hear whispered from the sidelines.

First of all, he is no American. Dom(inique) Einhorn is a French businessman from the heart of Alsace, who earned his fortune in the US digital revolution. Two years back, he left the smog of Los Angeles for the sunlit hills of the Perigord. But not to retire. His project is an ambitious one: to set up the world’s largest rural start up incubator and accelerator, UNIQORN.

An accomplished sportsman and enthusiastic sports fan, it’s no surprise that after less than a year in Sarlat, Dom ended up turning his attention to the Christian Goumondie stadium in Madrazès. Dom caught a serious case of the rugby bug working with Jean-Luc Menchon, his friend and accountant, who just happens to be the president of the local rugby association (CASPN).

Out of friendship for Jean-Luc, Dom decided to have one of his flagship companies, Mobcast (an enterprise specializing in digital marketing), help sponsor the team back in 2018. By the next season he had become their primary sponsor “after getting a taste for the sport and team.” He went on to explain that “while at first I knew little more than the basic rules of rugby, I was impressed with the atmosphere surrounding the sport. The spirit that I saw in the club was far more authentic than anything I witnessed in the football (soccer) teams I’d sponsored before.”

For the latest ‘Federale 2’ season however, there is a genuine revolution underway with ambitious aspirations. The goal is to take the team to the professional ‘D2’ league within 5 to 6 years (that’s a full 3 levels higher than their current category). Though they also plan to start a ‘Rugby University’ and to sell the game, and culture, of rugby on every continent!

After a few days spent pondering the problem, the businessman got back to his friend: “I told him I’d offer my support, but I wanted to take it one important step further.” He added that “I floated the idea years ago, but he must have thought I was slightly crazy”. It was far better received in the light of the current situation, and a little more explanation.

As soon as the lockdown ended, they brought together the club’s leaders and fans to join in the brainstorming. The directors committee had the final word: a unanimous vote in favor of the XXXL project.

Thus, on the 1st of January 2021, a new sports corporation “Sarlat Rugby” will officially see the light. Modeled after the strongest, and most hyped teams of France, with Dom Einhorn at the helm.

The corporation will run the A team, while the CASPN non-profit association remains to handle the rugby school and the training of young players. In addition to the independent professional structure, the club’s members are particularly enthusiastic about investment in the next generation of players and fans.

How to fuel the rugby revolution

There is no doubt that it is an ambitious project. Einhorn estimates that a minimum of 5 million euros will be required over three years to accomplish their A team objectives. For this season, the stated objective is simple: to break into the division finals and make the playoffs.

The 2020-2021 budget of the club – before Sarlat Rugby officially takes over in January – amounts to €700,000. Einhorn already has ten employees on the project, and he projects this will grow to 30 in 18 months. Sarlat can hardly count on giants like Airbus or Michelin to sponsor the team. So in order to find the money, Einhorn has set his sights beyond France’s borders.

Einhorn wants to mobilize visibility far beyond that offered by the stadium’s billboards. Notably by creating new rugby web sites in multiple languages, rugby-focused mobile apps, game highlight reels, TV deals, and online streaming content. The plan, which also includes short rugby content in video format designed to increase exposure to the sport abroad, should see the team get sponsored by online casinos, sportswear companies, and other businesses that could benefit from the club’s massive online reach. After all, what business wouldn’t want to be associated with a project that’s doing good and teaching new continents about the sport of rugby while promoting the team and its sponsors in the process?

Big sponsors on the horizon for Sarlat Rugby?

The content will be produced directly in Sarlat, with local talent and, of course, the players themselves. Einhorn has already produced a television series on travel, and has a rolodex full of channel content partners across the globe.

The town’s fame and charm are also an asset. “Sarlat is a small town, but draws 3 million tourists a year and is known in England, Australia and the US. That is valuable leverage and a major asset! Just setting up a shop for jerseys and team merchandise will help us export the name and brand.” He concluded. “With more media visibility, big sponsors can be drawn in. Even the major sports outfitters will eventually want a slice of the cake.”

The former commercial directors of the Manchester United and Inter Milan soccer clubs (both contacts of Einhorn) have been retained to assist with the adventure. Today, six professional players have already been recruited to do more than just play rugby. They have become key assets off the pitch as well. Lending their efforts and expertise on the business side towards the acquisition of new partnerships.

Sarlat Rugby is on its way to becoming a brand, but the project doesn’t stop there.

Building a brighter future for Sarlat and Rugby

“The club’s relationship with its most promising asset, the young players and fans, was particularly disappointing. Players were being stolen by other teams” bemoaned Einhorn.

“It is essential to prevent the poaching of our most promising talents,” Menchon added. “We want to keep them and, over time, create a bona fide training academy” in order to create real opportunities. A rugby university where they can train and develop discipline but also marketable skills, like foreign languages. The training offered will eventually include engineering, graphic design and digital communication; all skills likely to find the players work in the technology hub Einhorn is building in Sarlat.

A final angle of the project consists in widening the sport’s fanbase. They want to draw in the whole family and engaging younger audiences and volunteers. “We want to bring a family-friendly vision to the club, which sorely needs it” Einhorn told us. He mentioned as an example of their efforts, the creation of a new mascot. Benji the Salamander, brainchild of Einhorns spouse, Dr. Mia Nguyen-Einhorn, will make his first appearance soon. Meeting the fans and sponsors at the second home game of the season, against Lormont on October 11.

What the future holds for Sarlat Rugby

All that remains is to convince a few disoriented fans, for which only time and results will suffice. “We have plenty of work ahead,” Einhorn admitted. “It’s human nature to be wary of change. Our objective is not to convince everyone from the start, and our critics are already in the minority.” Here is the first message he wants to get across: “To be clear, we are not here to earn a profit yet. The project is a controlled risk. We know what we are getting into and it is motivated by more than just business objectives.”

So far the results are promising as the Sarlat Rugby have two wins under their belt already. They are near the top of their bracket and set to take on the current leader, Lormont, this weekend. The game will take place on their home turf, at the Christian Goumondie Stadium.

Madrazès will be open to all fans and skeptics alike. But this time it will be their cheers, not confused whispers, which fill the air.

First published in SudOuest, a third-party contributor translated and adapted the article from the original. In case of discrepancy, the original will prevail.