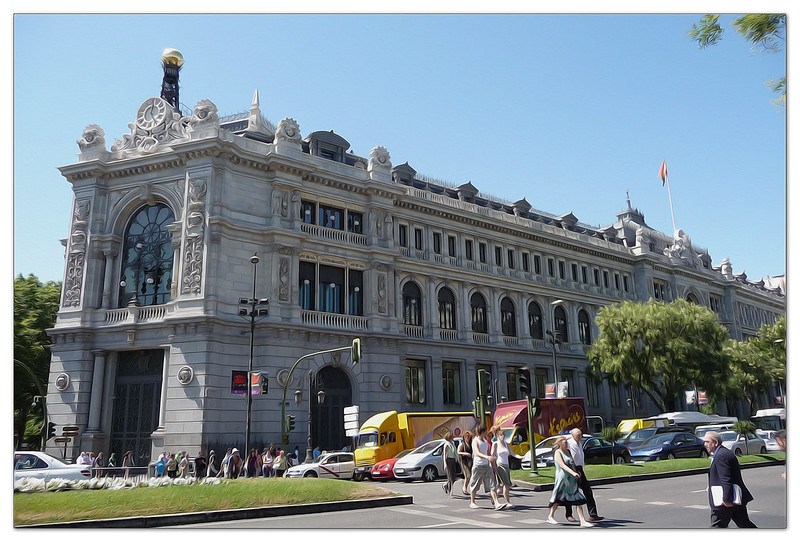 The Bank of Spain has a private pension system that complements the retirement of its workers, with assets of more than €280 million. The pension plan for more than 3,000 employees will receive next year €13.66 million from the supervisory body’s budget, an increase of more than 3% over the amount budgeted for this year. This new expansion of the fund coincides with a renewed battery of criticisms by the management of the Bank of Spain against the decision, agreed in the Toledo Pact, to raise public pensions with the CPI.

Read more on the subject and find the latest business news of the day with our companion app Born2Invest.

Last year, the Bank of Spain allocated €220.86 million to “assets and emoluments” of its 3,266 workers, and their salaries

Thus, the average basic salary of the workers who render services to the Bank of Spain amounts to €67,600. Although it should be stressed that this is an arithmetic average, since, for example, the salary of the governor, Pablo Hernández de Cos, reached €192,074.25 in 2021, as stated in the bank’s accounts. To this is added €26,946.12 for personal allowances.

However, this figure is only a preview of the institution’s personnel expenditure. €19.65 million are added to “social action”, another €50 million to “social insurance contributions” and €12.63 million to this pension program. In total, the agency’s personnel expenses in 2021 amounted to €302.28 million. More than €92,500 per employee.

To this figure of €67,600, on average, in salary, are added the rest of the concepts of the Bank of Spain personnel expenses. In addition to pensions, the Bank’s employees have other benefits. This is the case of subsidized vacations, as this media has detailed during the last few days. The supervisor spends at least €5 million a year to pay part of the hotel stays on the vacation of its employees and the operation of its two residences, one in the mountains of Madrid and another on the coast of Tarragona. To this must be added the numerous maintenance and refurbishment contracts, including the construction of two swimming pools, which the institution camouflaged, for €1.2 million.

The pension plan applies to all the employees of the institution and guarantees them a significant extra income at the time of their retirement. According to Bank of Spain statistics, the average contribution per employee is €3,800. On the assumption of a 35-year career as a supervisor, employees would find themselves in retirement with €133,000 contributed by the company. To this should be added the contribution made by the employees themselves to the fund – the Bank of Spain has not detailed the amount – and, above all, the profitability generated by the pension plan. The statistics of Inverco, the investment entity employers’ association, show a negative return on this fund (Fondebe) in the last two years, like the sector as a whole. However, it is among the five most profitable if the last 26 years are analyzed: 4.48% annualized return.

This investment vehicle was born in the early nineties, although its origin actually dates back to the mid-nineteenth century. The current system means that the Bank of Spain makes annual contributions for each worker to this fund, while the employee makes another part of the fund’s income. In this way, these employees, already considered among the elite of public workers due to their competitive examinations and salaries, have an extraordinary payment in the concept of contributions to the pension plan.

According to the Bank of Spain’s accounts, the organization contributes 7.5% of its employees’ salaries to this investment vehicle to pay for future pensions. A complement for their retirement, in addition to the one to which they are entitled through Social Security. Fondebe, which is managed by Ibercaja, is not the only employment pension plan used in the public sector. The General State Administration, the Generalitat de Catalunya, RTVE or numerous city councils and universities have similar tools, although in some cases without any contribution from the employer. None have assets per participant similar to those of the Bank of Spain.

The statistics of Inverco, the investment, and pension fund employers’ association, show the important importance of this fund. According to its latest data, at the end of September, Fondebe had accumulated assets of €281 million and was owned by 3,939 people. €71,350 for each of its participants, which would be redeemed by their beneficiaries at the time of retirement.

Occupational pensions are the second pillar of the retirement coverage system. The first is made up of Social Security, and public benefits, and the third is the individual plans. This intermediate vehicle is very underdeveloped in Spain compared to other countries and, according to Inverco, only provides coverage for 1.8 million workers. However, this volume of employees participating in these vehicles is centered on the country’s large companies. The big names in this business are CaixaBank, Telefónica, BBVA, Santander and Repsol, companies that have been providing this type of supplement to their workers for decades. The Government has implemented a new system, including a public promotion fund, to try to make this savings tool reach SMEs or civil servants who are left out of these plans.

The Bank of Spain explains that this pension plan is “a consequence of the provisions of labor regulations”. This private fund, they add, is “accessible to all employees of the Bank of Spain and the contributions to the plan are of a mixed nature, one part being paid by the promoter (the organization) and the other by the employee”. Tax regulations limit annual contributions to this pension plan to 8,500 euros. The contributions made by the company are considered as earned income, but they are reduced when calculating personal income tax, so their tax impact is neutral. Taxes are paid when the money is withdrawn from the plan.

A benefit inherited from the 19th century

The seed of what is now Fondebe was sown 170 years ago, in the middle of the 19th century. It was the Bank of Spain Employees’ Pension Fund. It was a system whereby the Bank’s employees received part of their remuneration as contributions to this common fund for their retirement. The resulting pension covered a large part of the employee’s salary. This was stated in the statute of this Fund, published in the 1950s: “This pension will be 30 hundredths of the regulatory salary after ten years of service, increasing by 2 hundredths for each year or fraction exceeding this period, without, in any case, exceeding 90 hundredths of the regulatory salary.” In other words, up to 90% of the salary was insured with this fund.

This was the method in force until 1986. Spain’s entry into the European Union brought with it the commitment to eliminate the mutual funds that were in force for some civil servants and to homogenize their conditions, eliminating the privileges of the past. Thus, the workers of the Bank of Spain were integrated into the Social Security system, and those who joined the organization after that year no longer participated in the mutual benefit system. However, over time, the workers of the Bank of Spain managed to agree on the creation of the Fondebe, a private supplement that increases the pensions of the group.

(Featured image by manuel m.v CC BY 2.0 via Flickr)

First published in elDiario.es, a third-party contributor translated and adapted the article from the original. In case of discrepancy, the original will prevail.