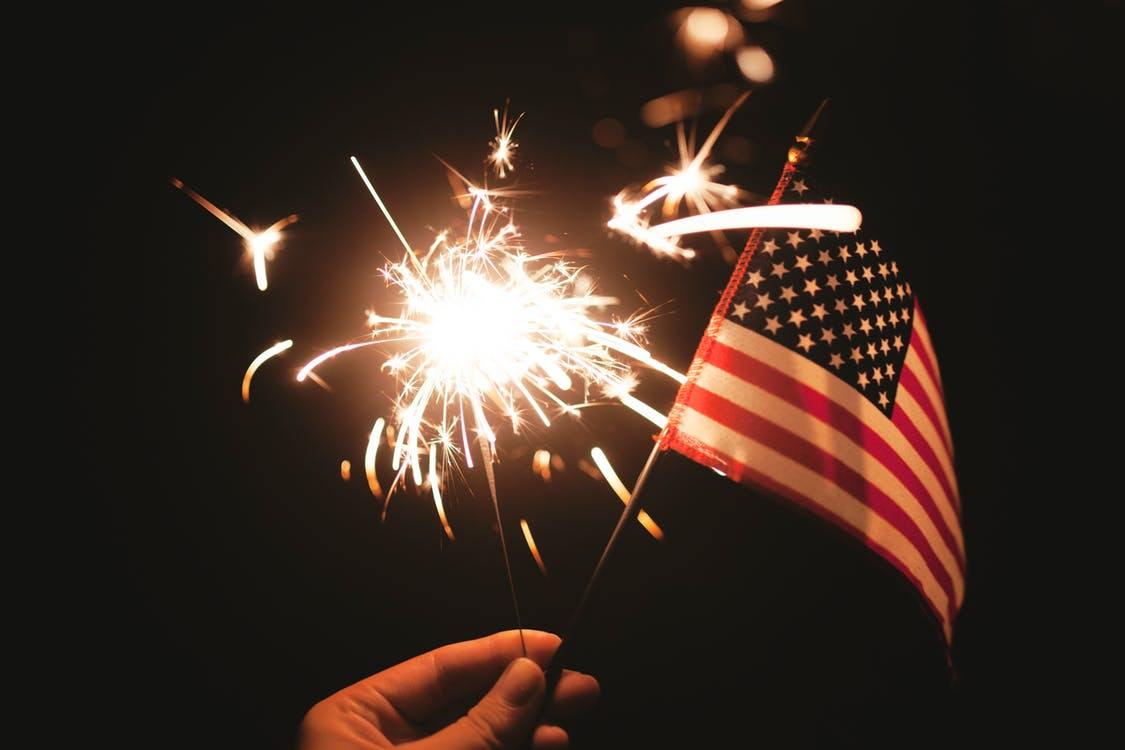 Upward mobility in the U.S. has almost disappeared. With the constant increase of educational and healthcare costs, one can’t help but wonder if the American dream is really dead.

Just look at this chart! 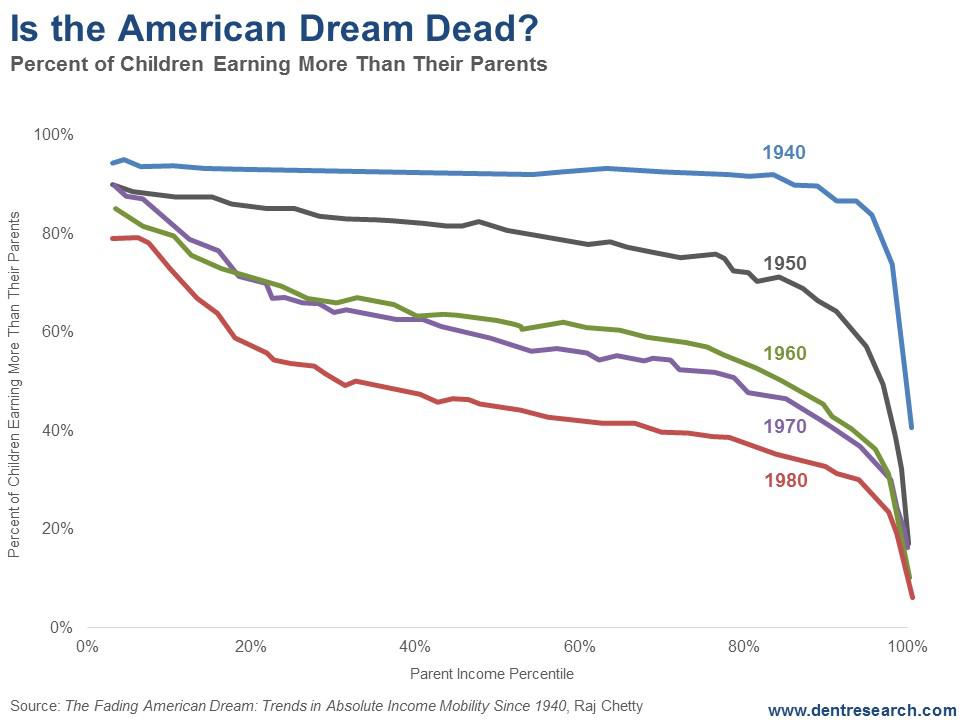 If you were born in 1980, you only have a 50% chance of making more money than your parents.

But if you were born in 1950, you had a 79% chance, according to research that Raj Chetty and his team of economists did.

That’s one heck of a drop!

Upward mobility in the U.S. has almost halted. Of course, this is no news to us… and we can point a finger to at least one of the culprits.

Our colleges and universities.

They have essentially become strongholds for a new mafia, one that dons academic caps and gowns!

As I told 5 Day Forecast readers last Monday, the “Intelligentsiosi” have become bloated, greedy and mad with their own success.

It’s all become a statue to their egos!

Unfortunately, there are two sets of victims of these crimes.

The first are the students trying to get a start in life. The poor suckers must clamp an iron ball of debt around their ankles just to get through the front door of these higher education institutions… unless their parents are rich enough to fund these stratospheric costs.

If the ball doesn’t drown them right out school, then they lug it around for decades while they slowly chip away at it.

The second set of victims is the rest of us and the American economy!

The situation is now so far out of hand as to boggle the mind. In fact, our healthcare costs, which are twice as expensive as anywhere else in the world, now pale in comparison to how our education costs are rising. See for yourself… 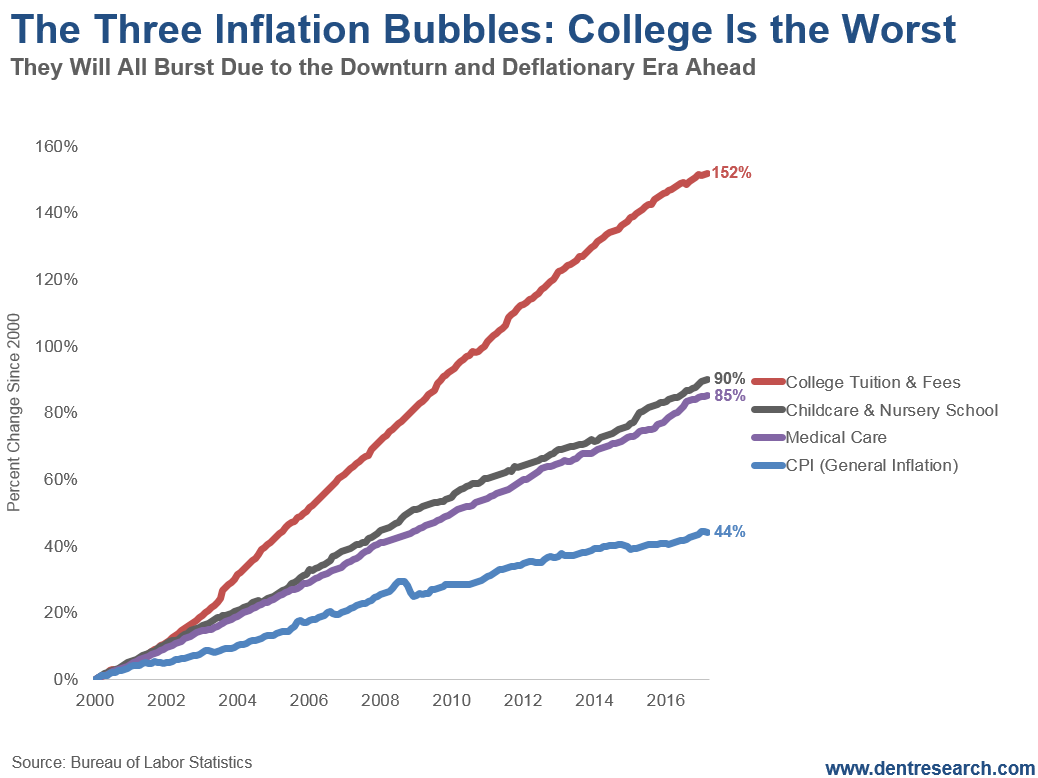 There is no conceivable, valid justification for such inflation!

Education is an information industry!

As we meander through the tail end of the information revolution, the costs of accessing any information continue to decline rapidly. Yet the cost of a college degree is still rising like a rocket to the moon.

People like me and many leading-edge experts could be streamed across college campuses at nominal costs, adding to what’s on offer from the local professors… and how could they be better than the best experts in the world when appropriate?

Computers and technology cost exponentially less today than a decade ago.

TVs and books tend to cost less as well.

So why are costs for education still rising?!

Can’t these Intelligentsiosi see that their actions are robbing Americans of the opportunity for social and economic improvement?!

Upward mobility in the U.S., once one of the easiest accomplishments in the developed, is now ranked as one of the hardest.

Europeans and Canadians don’t have this problem. Their education costs aren’t so horrific, nor are their healthcare costs.

Empowering penniless immigrants or citizens so they can rise to success against all the odds?

It seems to me these “wise” guys are more interested in landscaping than the American dream.

Back in the ’90s, when I lectured to successful small business owners at TEC (now Vistage) and YPO (Young Presidents Organization), most were self-made millionaires… not trust-fund brats.

Innovation depends on the ability of the lowest to rise to the top. It survives best from adversity.

But by withholding the opportunity for higher education – by putting the price tag way out of reach of anyone but the wealthy – we’re killing the golden goose.

SEE ALSO  A critical month for the markets

It will be the end for our great country if we don’t have a revolution in education, at the very least.

Luckily, we WILL have a revolution.

Right now, the 250-year political and social revolution is converging with our economic winter season. The last time this happened was in the late 1700s. The result was democracy and capitalism – the two greatest breakthroughs of modern history.

The three greatest impediments to democracy and capitalism are:

1) Special interests, that have taken over democracy.

I graduated from Harvard, but I refuse to send a penny of my substantial charity contributions to them. Still, they have a foundation and fund that is off the charts. So why do they have to charge so much for tuition?!

They do it because they can.

These bad fellas have had the Baby Boomers by the balls for decades. Now they’re holding Millennials hostage: “Pay up or live in your parents’ basement for the rest of your life!”

I can’t wait for the broader bubble to burst because it’ll cascade across sectors, industries and the world.

It will finally bring everything back down to reality!

Mark my words: A revolution is coming in higher education and everywhere else. It will be painful.

And it can’t come soon enough.