Cycles reoccur throughout history, but they more rhyme than duplicate.

Each bubble tends to get more extreme than the last one because there’s more wealth to chase it. Wealth is concentrated in the top one to 0.1 percent and grows exponentially (income does not).

The greatest bubble of our lifetimes was the tech bubble in the Nasdaq from late 1994 into early 2000. That built over a period of five years – the typical time frame for most stock bubbles.

This current bubble, from 2011 to present day is an anomaly. This Fed and global central bank bubble have been totally artificially driven by unprecedented QE and zero interest rate policies for 8.7 years now.

It has now outstripped the tech bubble in time, total point gains, and percentage gains.

Make no mistake about it: This is the greatest stock market bubble in modern history.

But it’s not THE greatest bubble anymore. That dubious honor goes to Bitcoin!

Last December, safety triggers shut down trading of Bitcoin futures because prices had soared too high too fast!

And there are experts out there still trying to convince investors that this isn’t a bubble! That’s dangerous talk if you ask me.

Bitcoin and cryptocurrencies are following a similar path to the late and most bubbly internet sector of the last tech bubble, which came largely between late 1998 and early 2000. Look at this chart: 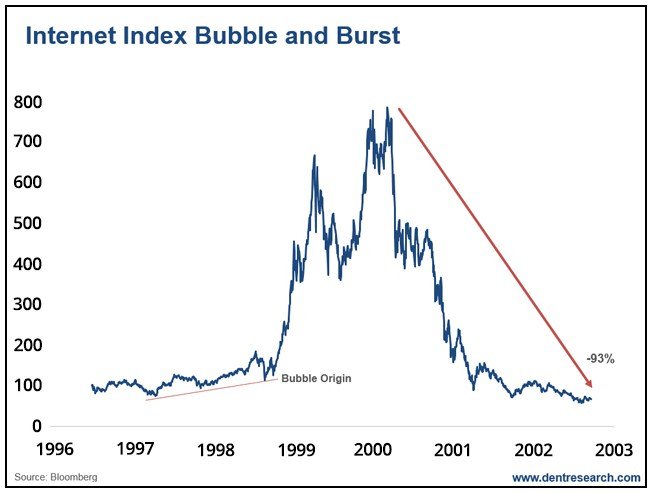 The Bloomberg internet index went up eight times in a little more than a year and then collapsed 93 percent compared to the 78 percent decline in the Nasdaq! Talk about an extreme bubble!

And most of the damage occurred within one year of that, as usual, with the first sharp crash in the first few months. Investors lost 50 percent right off the bat in a few months. That’s why it’s better to get out a bit early.

Now, look at Bitcoin versus the internet back then. Note that Bitcoin is one of the most extreme and largest leaders here—it’s like one stock versus a broader index—so it may be a little more exaggerated: 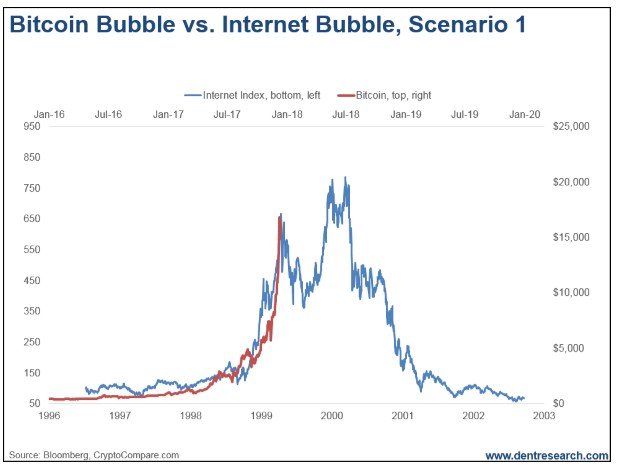 Any closer a correlation to the late stage internet bubble and it might as well be identical! 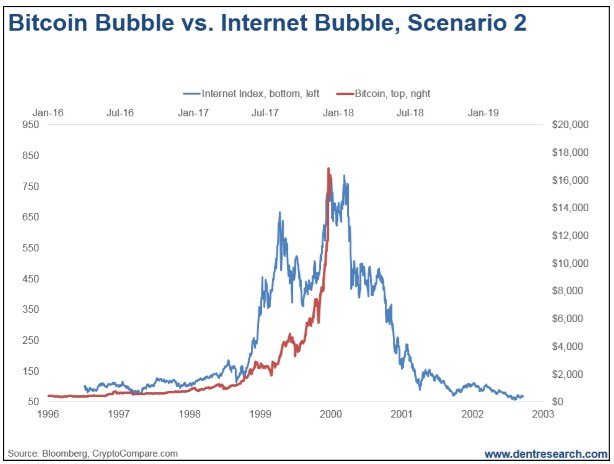 This second scenario is that Bitcoin is already nearing its final peak and will crash dramatically, sooner rather than later.

Either way, this bubble is likely closer to done than not and the risks are growing of a major 90-percent-plus crash with most of it occurring this year.

Everyday investors are no longer piling into the FAANG (Facebook, Amazon, Apple, Netflix, Google) stocks as strongly, the leaders of the last internet revolution that started in the late 1990s. Instead, they’re piling into Bitcoin and other cryptocurrencies, like Ethereum and hundreds of others.

This late-stage bubble could peak just weeks ahead of the broader Nasdaq bubble and give warning signs of the next great crash ahead.

A crash in which we’re likely to see a 40-percent-plus loss in the first two or three months.

You don’t want to be there for that!

But here’s the most important insight

This cryptocurrency trend is the second stage of the internet revolution and deals with security of financial transactions and other things of financial value that are increasingly under threat of being hacked.

It’s not the “big bang” that launches a new 45-year Innovation Cycle like the internet did. Rather it’s the one that first consolidates it and makes it better in the maturing phase of the cycle. That said, it could well morph into the next big bang cycle from 2032 to 2055.

It’s about more secure, faster, and lower cost financial transactions over the internet. That makes this a major trend in the longer term.

These stocks, like the best-emerging countries and metals in commodities, will be the leaders to come out of the greatest crash, making them the prime sale of a lifetime candidates in the years ahead.

(Charts Courtesy of Dent Research and Featured Image by John Russel via Flickr. CC BY 2.0 )