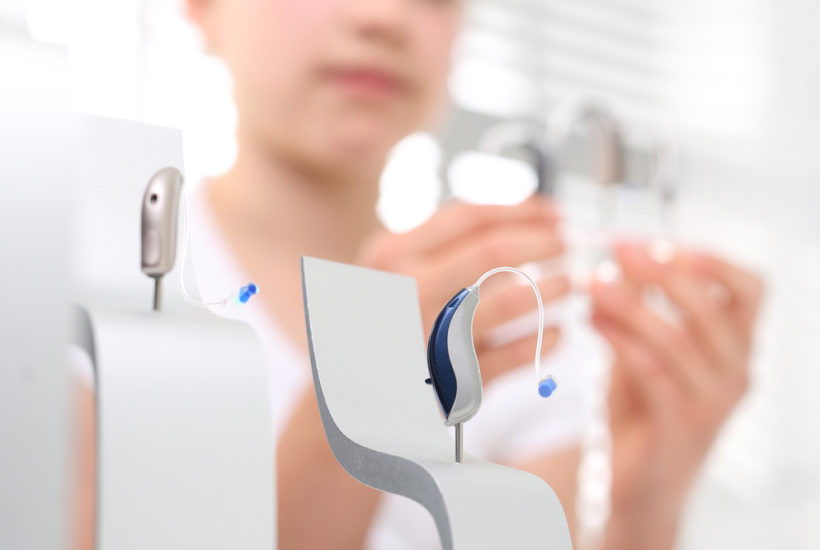 Hearing aids make sounds louder for people who have auditory challenges Since the invention of the first hearing aid in 1898, these assistive gadgets have gone through numerous advancements related to battery life, appearance and effectiveness. However, even the best hearing aids on the market often fall short when wearers are in crowded rooms.

That’s because they amplify all sounds equally. If a person’s at a party where dozens of people in a room are all chatting loudly, a hearing aid couldn’t differentiate between the individual trying to converse with the wearer and someone who’s standing a few feet away and talking to someone else about the assortment of snacks offered. But, that could change thanks to the work of researchers who are developing brain-powered hearing aids.

How would brain-powered hearing aids work?

A team at Columbia University is in the early stages of creating hearing aids that use artificial intelligence (AI) and brain wave monitoring to detect which voice a person wants to hear. Then, a hearing aid with that technology would make that speaker louder, allowing the wearer to listen to them easily in a crowded environment.

An area of the brain already performs such filtering, and the scientists hope to base their innovation on what the brain does naturally. During their research, they examined the brain waves of people who were speaking and those who listened to the speakers. The team noticed that as two people talked to each other, the brain waves of the listener began to appear like those of the speaker.

They developed algorithms that separated speech, then combined them with neural networks. The neural networks are advanced mathematical models that work similarly to how the brain does. The algorithms got trained on more voices than a human could hear in a lifetime. Their technology first separates the individual voices of speakers in a group of people. It then starts comparing the brain waves of all the speakers to the brain waves of the listener.

SEE ALSO  How do we keep bookstores alive in the age of Amazon?

The voice most associated with the listener’s brain waves gets amplified. Although the researchers developed a version of this technology a couple of years ago, it only worked after users trained it to recognize specific speakers first. That meant that hearing someone unfamiliar — such as a server in a restaurant or a retail worker in a busy department store — didn’t trigger the desired amplification effect.

But, enhancements made through neural networks help this new development recognize and decode any voice immediately. The scientists working on this project only have a prototype for now, but they hope to apply it to a future hearing aid worn around the ear or a person’s scalp. They’ve only conducted experiments inside, but will eventually make sure that the algorithms work equally well indoors or out.

How could brain-powered hearing aids affect the biotech market?

Statistics show that 20 percent of people in the U.S. have hearing loss. The issue results because of several reasons ranging from illnesses to too much exposure to loud sounds. As mentioned earlier, hearing aids have improved, but one of the still-present shortcomings is that it’s hard for the people wearing them to pick single voices out of busy environments and only listen to those.

So, these brain-powered hearing aids in the works could substantially impact the biotech market and provide lucrative opportunities for the biotech investors that associate themselves with the companies producing them. The payoff could be even more significant if the producers of the high-tech hearing aids figure out how to make them affordable.

The biotech market has abundant potential for growth. Making these hearing aids marketable and accessible to the people who need them could lead to positive developments for biotech investors as well as the individuals who need hearing assistance.

What other hearing aid advancements should investors know about?

The brain-powered prototype isn’t the only recent innovation that could help people with hearing loss live better. Last year, Starkey Hearing Technologies introduced an artificial intelligence-powered hearing aid called Livio AI. It uses high-definition, high-speed computer processing to help people concentrate on the sounds they want to hear. Livio AI also has a built-in health tracker that people can use with a complementing app.

Another company, this one called AudioTelligence, engineered a hearing aid that uses algorithms to help people listen to distinctive voices in noise-filled places. The algorithms reportedly don’t require training before use.

Efforts are also underway to help people decipher voices with a camera-connected hearing aid. It’s not ready for the market yet, but the team working on it in China uses a camera equipped with a 3D mouth-tracking algorithm. It watches a speaker’s lips to try and tell what they’ll say in advance before boosting the frequencies associated with those words and making other frequencies less prominent.

The advanced hearing aids mentioned here could substantially improve the quality of life for people who need them. And, the associated inventions could pave the ways of designing these devices for the foreseeable future.