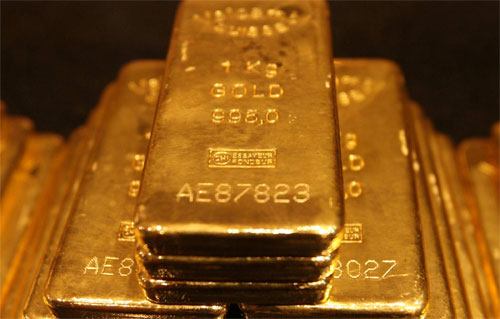 Large speculators increased their overall bullish positioning in gold and silver futures during the most recent reporting week of the Commodity Futures Trading Commission. However, in the case of gold, the activity from traders was somewhat mixed, as bulls and bears alike increased their exposure, although the bulls did so by a slightly larger number. In silver, traders both added to bullish bets and scaled back bearish ones, the CFTC data show.

“According to the CFTC’s statistics, speculative financial investors are continuing to expand their net-long positions in silver, albeit only in small steps,” Commerzbank said.

That shipment puts them nearly at their goal, almost four years earlier than planned.

Escondida union accepted mediation from the Labor Department in the middle of a strike. Special thanks go out to the Central American Bloomberg metals desk for sending me this information via twitter:

“Escondida workers, on strike for the sixth consecutive day, agreed to attend a meeting on Wednesday in which the Labor Department will seek to mediate to convince the union and the company to resume negotiations, while the miner, controlled by BHP Billiton, is analyzing even the government’s offer.”

Yesterday the DT approached the parties to call them to an “informal mediation.” This figure is an alternative that arises after the processes of collective bargaining and good offices, and which seeks to restore dialogue between the parties when it has been lost.

“This decision has been taken responsibly, thinking for the good of the country and the regional and national economy,” the union said. The company continues “in a closed and harmful position for its workers and for the country,” he added. Meanwhile, government spokeswoman Paula Narvaez said the executive hopes that both sides can start talks to end the strike.

How did the element copper get its name?

One billion in gold bullion at the University of Texas/Fort Worth Star-Telegram:

“Gold depository could soon be on its way to Texas”: Under the new Texas law, the comptroller’s office is working to create the state’s first bullion depository — which could hold deposits of gold and other precious metals…storage fees will be charged…. For instance, Texas pays about $1 million a year to store its gold in New York…”

Has the University of Texas recently purchased $1 billion of gold bullion? I don’t know for sure, but in my personal opinion there are lots of people today, possibly some are your neighbors and friends, who are buying and stockpiling gold bullion. That speaks of a lack of confidence in our country’s institutions and most specifically in our financial institutions and in our government. Read more here.

Gold confiscation is an important issue that strategic investors need to have a view on – the circumstances in which you are most likely to need your wealth safe haven is also when the risk of a Government wanting to take it away from you may be the highest. All of the discussion on this matter is US-centric and I do not recall ever seeing any commentary on the possibility of confiscation in other countries. It is a pertinent question because a fair number of Americans store their gold offshore on the simple basis that if the US Government did it once, they will do it again.

In this respect, Australia has a relatively higher risk because Australian law already has a mechanism in place to require delivery of gold to the Reserve Bank of Australia (RBA) – Part IV of the Banking Act 1959. There is no need for the Government of the day to have to rush new legislation through that may attract public comment or opposition. All that is required is the Governor General to proclaim that Part IV shall come into operation. The ease with which this can occur is a negative mark for Australia. A small consolation is that we have certainty as to the legal form this confiscation will take.

SEE ALSO  Where is the gold sector heading?

Arguing that federal policies have made paper money “virtually worthless,” Arizona lawmakers are moving to allow residents to invest in gold coins and not have to pay state taxes on any profits they make when they sell them. Legislation awaiting a final House vote would carve an exemption in existing laws that require people to report — and pay taxes — on capital gains. So, if you buy art, jewelry or an antique car for $10,000 and sell it for $12,000, you owe the state tax on that $2,000 profit. But Rep. Mark Finchem, R-Oro Valley, argues that’s not true if you’re buying U.S. gold coins. He said it’s simply exchanging one form of U.S. currency for another. If you were to exchange four quarters for a dollar bill, that’s not a taxable event,” Finchem explained during House debate last week on his HB 2014.

Armenia to restore its gold reserves?:

In late 2003 the Central Bank made a strategic decision not to use gold in its external gross reserves and sold 1.4 tons of gold for $17 million. The move was explained by ‘the high liquidity on the gold market over the past few years.’

This year, the Year of the Rooster in the Chinese lunar calendar, will also be the year of gold, said Haywood Cheung, president of the Chinese Gold & Silver Exchange Society-an umbrella organization of gold trading firms in Hong Kong which are participants of the Chinese Gold and Silver Exchange. In an interview with the China Daily, Cheung said he drew his confidence from the turbulent global economic environment, which he said would create a bull market for bullion.

Cheung forecast that the international gold price could potentially climb to $1,600 per ounce in the year. Investors are advised to allocate 20 to 30 percent of their assets to the gold market to hedge risks including the depreciation of major currencies, the uncertainty over US President Donald Trump’s China policy and the sluggish economic situation in Europe.

10 Arrested in Connection with €25 million International Gold Smuggling Ring/Business Insider: According to a statement from Eurojust — an EU agency “dealing with judicial co-operation in criminal matters” — an operation led by Italy’s Guardia di Finanza and assisted by Hungarian and Slovenian authorities has led to numerous arrests related to laundering across the three nations.

“The group members are accused of being part of a criminal organisation involved in gold laundering in Italy, Hungary and Slovenia,” Eurojust’s statement said. The people were involved in a scheme where unspecified “gold items” were stolen in Italy, before being melted down and turned into gold bars, which were then sold on Hungary’s official gold market “by a Hungarian company that issued fictitious sales invoices to a second Italian enterprise,” according to Eurojust.

Fed on course to raise rates at an upcoming meeting/Reuters:

The Federal Reserve will likely need to raise interest rates at an upcoming meeting, Fed Chair Janet Yellen said on Tuesday, although she flagged considerable uncertainty over economic policy under the Trump administration.

Our refiners always say “Good to the last drop”/FT:

In a basement on London’s Hatton Garden, a small production team is heating a furnace to 2,000C — a temperature that will obliterate most materials placed within it. Each day, here at precious metals refiner Mastermelt, the furnace is fed a diet of objects collected from jewelers’ workshops — full bags from vacuum cleaners, used wet wipes, blunted sandpaper and even old carpets — in the hope that when the ashes are processed, thousands of pounds’ worth of gold, platinum and more will remain.

“We always tell people, don’t throw anything away,” says Gary Williams, a director at Mastermelt, who the previous week paid out £17,000 to a jeweler who had been casually stockpiling the general detritus a workshop produces. “He’d just been saving all this stuff and didn’t realize what it was worth.” Mastermelt makes its money by taking a commission on the value of the scrap metal refined, as well as charging for processing.

Part of Mr. Williams’ job is to educate jewelers on the financial rewards of hoarding every waste-attracting object and sending the haul — known as a sweep — to a refiner to be melted down and the precious metals reclaimed. Most jewelers will be astute enough to collect hard scrap, also known as lemel, which includes filings caught in animal skins hung beneath workbenches for this very reason, or clippings from claws cut to size when setting a diamond in a ring. Once weighed, the value of this scrap can be easily ascertained, and Mastermelt has an app that can be downloaded to give jewelers access to live prices.

CNN kicked out of Venezuela for “Fake News”/RT:

Venezuelan leader Nicolas Maduro has asked CNN to stay “outside of Venezuela,” accusing the network of attempts “to manipulate.” It follows reports by the network on a hard-up Caracas school and on allegations of Venezuelan passport fraud. (I warned everyone about this last week, beware).

“CNN, do not get into the affairs of Venezuelans. I want CNN well away from here. Outside of Venezuela. Do not put your nose in Venezuela,” Maduro said, as cited by El Nacional. The words were delivered during a youth march.

In Japan, the largest holder of Treasuries, investors culled their stakes in December by the most in almost four years, the Ministry of Finance’s most recent figures show. What’s striking is the selling has persisted at a time when going abroad has rarely been so attractive. And it’s not just the Japanese. Across the world, foreigners are pulling back from U.S. debt like never before.

From Tokyo to Beijing and London, the consensus is clear: few overseas investors want to step into the $13.9 trillion U.S. Treasury market right now. Whether it’s the prospect of bigger deficits and more inflation or higher interest rates from the Federal Reserve, the world’s safest debt market seems less of a sure thing — particularly after the upswing in yields since November.

Copper gets its name from the Latin word Cuprum, meaning from the island of Cyprus. In the Ancient Roman world (whose common language was Latin), most copper was mined in Cyprus.