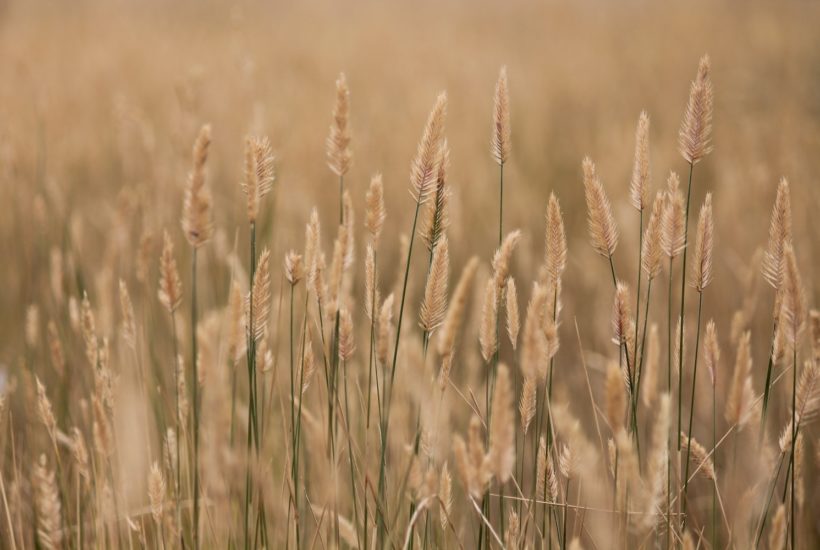 Winter Wheat markets were higher last week and Chicago Winter Wheat markets made new highs for the move on the weekly charts before finding much selling interest. Minneapolis Spring Wheat seems to have a lot of selling near the 530 September level and this has kept the futures are in a sideways to an uptrend.  The market is still reacting to which way Wheat prices are going here and overseas. Black Sea prices have been firming in the last couple of weeks. The Russian farmer is not selling to exporters as they can get better prices internally. Spring Wheat was developing under good growing conditions in both the US and Canada. However, a frost is forecast for these areas next week and some light damage is possible to some crops. Harvest has expanded and yield reports are solid in the northern Plains. It is still dry in France and Russia and now Spring Wheat areas of Russia are being affected. Russian Winter Wheat yields have improved over time as harvesters move into areas that had better-growing conditions. Australia remains in good condition and is getting beneficial rains. About half of the Argentine Wheat belt is too dry and wire reports indicate that production in the worst areas could be 50% of normal.

Corn was little changed last week. The hot and dry conditions are in Iowa and northern Illinois right now, but some sections of Iowa will get some beneficial rains this week and started raining on Sunday. The rains were beneficial and more are coming. Demand has also been strong with a lot of Chinese buying. China has bought a lot of US Corn lately to fulfill short domestic production. China has also been offering Corn out of state reserves to try to keep the market supplied and has apparently succeeded as demand for the domestic Corn has tailed off in the latest round of offers.  The US harvest is getting ready to start and there will be less production than had been estimated earlier by the trade. The production should still be enough to add to ending stocks even with the strong Chinese demand. The current higher prices might not last much longer and a move back down into harvest lows is probable.

Soybeans and Soybean Meal were higher, but Soybean Oil was lower.  Soybeans and Soybean Meal made new highs for the move as did Soybean Oil before the market turned lower. Soybeans are still in a weather market. It was hot and dry in much of the Midwest last week and the Soybeans suffered. Rains and cooler temperatures were seen in the Midwest starting on Sunday and should continue through the balance of this week. The change in the weather pattern should help the Soybeans on their way to maturity. The production totals are expected to be big, although not as large as the original forecasts made by private analysts. The weather will start to lose its bullish influence on prices in the next few weeks and the harvesters get ready to roll. Demand from China has held strong but might be about to end. China is now booking Soybeans into dates that are close to the first shipping dates from Brazil and will no doubt start to look to the south for additional supplies. Prices for new crop Soybeans are cheaper in Brazil.

Rice was a little higher again last week as Hurricane Laura came onshore.  The damage from the storm was intense near the Gulf Coast but most if not all of the Rice had already been harvested. Some damage to port facilities in Port Charles was noted and the cleanup there will take some time.  Some silos full of Rice were also damaged. The storm diminished quickly and little damage was reported in Mississippi, Arkansas, of Missouri. New crop prospects appear solid for increased production in the coming year. The area is larger and the growing conditions are mostly good. The crops are called in good condition in Mississippi, Arkansas, and Missouri. Texas and southern Louisiana field yield reports are strong. Quality is called average to above average. Brazil is reported to have bought a couple of cargoes of Rice late last week as it has run short. The fact that Brazil is buying from the US means that competition for sales in the Western Hemisphere will be significantly less this year and should support somewhat higher prices for US Rice and futures markets.

Palm Oil closed higher on the back of rallies in Chicago and Dalian Soybean Oil. Demand reports from the private surveyors were down and this is becoming a bigger problem for higher prices. Production ideas are down as workers for the plantations are harder to find, but the market appears to have priced itself out of the demand base. Flooding and a lack of workers for the plantations have been the reasons to see less production in Malaysia. Palm Oil has been hoping for better demand from importers as world economies slowly open after being closed by the Coronavirus epidemic. Indonesia continues to focus its Palm Oil on internal demand for biofuels. Soybean Oil was lower and Canola was higher. Canola closed higher despite good growing conditions in Canada and the stronger Canadian Dollar. The strength in the Canadian Dollar is more about weakness in the US Dollar than anything going on in Canada. Crop conditions are mostly good and farmers have been selling old-crop supplies. The weather has been warm and most areas have seen rain.  It will turn colder this week and some of the Prairie provinces will see a frost or light freeze. The cold air even is not expected to hurt Canola all that much.

Cotton closed a little lower for the week and trends are sideways on the weekly charts. Demand has improved over the last couple of weeks but remains at depressed levels. The export sales report showed better sales to China but not that much beyond that. Demand should stay week as long as the Coronavirus is a feature of life around the world. Shopping is hard to do and many people are still unemployed. This is especially true for the US but it is true to some degree in just about all countries. The supply losses are in the market now. However, the Harvest is still a ways down the road and the tropical season is active. There will be more chances to inflict more damage on the crops to help try to rally prices.

FCOJ was higher. The daily and weekly charts show that trends are starting to turn up. No hurricanes have hit Florida yet. The systems have all gone south into the Gulf of Mexico or north into the Carolinas. That usually means lower prices for futures but prices are already relatively cheap. The Coronavirus is still promoting consumption of FCOJ at home. Restaurant and food service demand has been much less as no one is really dining out. Florida production prospects for the new crop were hurt by an extended flowering period, but the weather is good now with frequent showers to promote good tree health and fruit formation. Import demand to the US should be minimal as US prices remain below those of Europe. Brazil has been too dry and irrigation is being used. Some showers are in the region now to help in Sao Paulo.

Futures were higher in New York and higher in London. London has been the leader on the rally as demand for Robusta has improved with people staying at home. It is now trying to form a bull flag. Chart trends are still up in New York. Vietnam was dry during the flowering time and is dry again.  Production ideas are lower. Demand remains down. The demand from coffee shops and other foodservice operations is still at very low levels. Consumers are still drinking coffee at home and the return of the Coronavirus outbreak will keep things that way. Reports indicate that consumers at home are consuming blends with more Robusta and less Arabica. Europe is emerging from lockdowns.  The Brazil harvest is almost over but shipping has become difficult due to the widespread outbreak of the Coronavirus there. Even so, the ports are operating normally. Ideas are that production will be very strong this year as it is the one year for the trees. The strong production ideas are coming despite hot and dry weather seen in the country at flowering time. Bloomberg reports that Brazil producers are getting ready to flood the New York market with Coffee that they hope will find its way into certified stocks.

New York and London were both lower on speculative and fund related selling. Chart trends are down in both markets. The ISO said on Wednesday that Sugar supply and demand were in balance for this crop year but a supply deficit is possible next year. The ISO news for the current year appeared to be enough to start to turn trends down. CONAB noted in its most recent report that Brazilian mills are producing more Sugar and less Ethanol this year due to reduced Ethanol demand.  Ideas are that there is plenty of Sugar for the world market. India is thought to have a very big crop of Sugarcane this year but getting it into Sugar and into export position has become extremely difficult due to Coronavirus lockdowns. Thailand might have less this year due to reduced planted area and erratic rains during the monsoon season. There are reduced flows from rivers from China to hinder irrigation of the crops.

New York and London closed lower in correction trading. The charts show that both markets turned trends up last week but are giving back gains now. The current crop features strong production but there are worries about the next crop. Nigerian traders told the wire services that the Nigerian rainfall has started and that crop conditions are much improved. There are a lot of demand worries as the Coronavirus is not going away and could be making a comeback in the US. Europe is still trying to open its markets again but the Coronavirus is still around and consumers are reluctant to buy. Ideas are that Southeast Asia also has good crops.