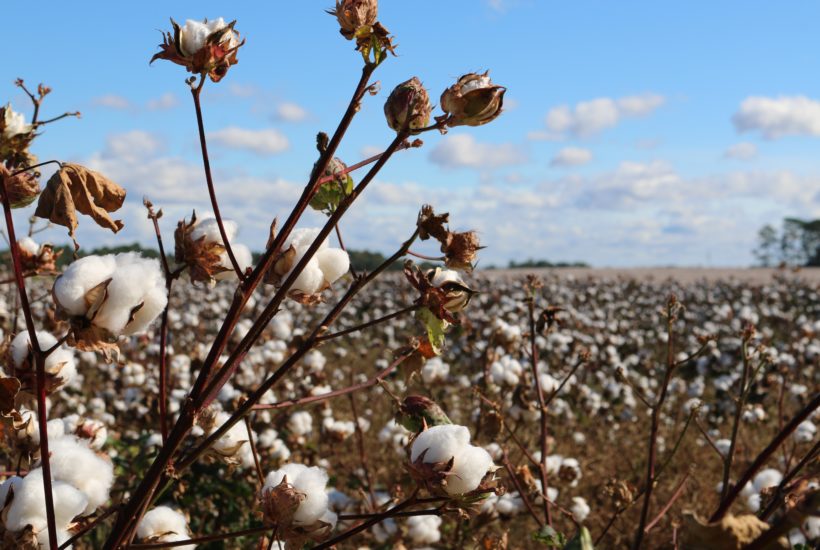 Wheat: All three Wheat markets were higher on Friday in recovery trading, but Winter Wheat lower for the week.  Minneapolis Spring Wheat was higher. Chart trends turned back down in the Winter Wheat markets but are more mixed in Minneapolis. It’s harvest time for Winter Wheat. Yield reports have generally been good.  Spring Wheat areas of the US and Canada got some showers and storms, but mostly in Canada. A few more showers are in the forecast, but once again mostly for Canada.  It will be cold in Canada as well. North Dakota is looking mostly dry and model runs from last week have taken some of the precipitation for the next week out of the state. Showers and rains were seen in parts of Western Texas and in Oklahoma. Drier weather is preferred for harvesting. Some rains would be very beneficial for planting and initial growth of the Spring Wheat and these are falling in some areas.

Corn: Corn was higher on Friday but lower for the week as forecasts for the Midwest called for good rains over the next week or two.  Traders were also worried about Fed actions in response to inflation.  The export sales report showed demand was at the low end of trade expectations.  There are also concerns about ethanol demand as the government could soon modify its waiver system and allow for a few waivers in the near term.  The northern areas could see cooler temperatures and some rains in the next week.  Oats were also lower last week.  Canadian Oats areas look to get some very beneficial rains in the near term.  Some rains were reported in Oats areas last week and these showers and storms spilled into the Dakotas and Nebraska and into western Iowa.  Hot and dry conditions continue in central and northern Brazil.  Longer range forecasts released by NWS call for warmer and drier weather for many important US growing areas this Summer.

Soybeans and Soybean Meal: Nearby Soybeans and both products were sharply lower as weather and demand concerns returned to the forefront.  USDA released its monthly WASDE updates and showed less domestic demand and higher ending stocks. Export demand was left unchanged and all data for the next year except ending stocks levels were also left unchanged. President Biden is apparently considering adding some waivers back to the renewable fuels program to help the industry and is under some pressure to do this. There are no waivers allowed now, but new waivers would hurt Soybean Oil demand. It rained on Friday in the Great Plains from Nebraska to North Dakota and on into Canada.  Forecasts call for warm and dry weather this week in the northern Midwest and northern Great Plains but showers are in the forecast for much of this week in central and southern areas.  China should start with new US Soybeans purchases soon for Fall delivery and reports indicate they are now asking for offers. The longer range forecasts from NWS call for warmer and drier than normal conditions for most Soybeans areas of the US.  There is still crush demand and a little export demand even though the demand is less now than before.

Rice: Rice prices were higher on Friday but lower for the week and made new lows for the move.  Mostly dry conditions and warmer temperatures are currently forecast for southern US growing areas, but Louisiana could get a tropical storm moving through this weekend.  Rice areas have generally been wet and northern areas have been cool, but better conditions are appearing this week.  Louisiana and parts of Texas were saturated but it is drier now and crops are rated in good condition overall.  Warm temperatures are reported in Arkansas and Missouri and the crop progress is improving.  However, it is still very wet in Arkansas, and farmer progress has been limited for the last couple of weeks.  Texas and Louisiana are almost out of Rice, but there is Rice available in the other states, especially Arkansas.  Milling interest in Rice is said to be slow.

SEE ALSO  Globalization: bringing traditions from around the globe together for the benefit of all, adaptogen’s case study

Palm Oil and Vegetable Oils: Palm Oil futures were higher Friday on stronger overnight Chicago Soybean Oil futures, but down a lot for the week. Some of the weaknesses on the weekly charts came with a change in the front months, but part of the weakness was on ideas of weaker demand and potentially stronger production.  The private surveyors showed less demand so far this month.  There were reports that Indonesia was about to cut its Palm Oil export duty.  Demand has been less so far this month and the market fears the loss of Indian demand due to the big Coronavirus outbreak in India that could cut demand.  However, prices are very high in India, and imports are needed.  Canola closed sharply lower on weather concerns and Chicago price action.  Some showers, but a lot of dry weather, is in the forecast for the Prairies this week and it remains generally dry.  Demand has backed off with the collapse in world vegetable oil prices.  Soybean Oil was sharply lower in response to ideas that the current government might offer some waivers to the industry and cut demand for biofuels.  There are many who think this will not happen, but many who are worried it will.

Cotton: Futures were higher on Friday in recovery trading, but lower for the week.  Trends are mixed on the daily and weekly charts, but the weekly charts show an upside bias. The Fed signaled last week it was becoming more concerned about inflation. Many agricultural products including Cotton got hit hard as funds sold in response to the Fed statements. Cotton growing conditions have improved with rains reported in West Texas and the Delta. West Texas and the Delta are now too wet but are expected to dry down a bit this week. Some very beneficial rains are in the forecast for late this week or this weekend in the Southeast. Production ideas are being impacted in just about all areas due to the weather extremes.

Frozen Concentrated Orange Juice and Citrus:  FCOJ closed lower and chart trends are still mixed on the daily charts but down on the weekly charts.  The hurricane season is here and a big storm could threaten trees and fruit.  The only storm near anything is in the Gulf but too far west to affect the state of Florida.  An active season is anticipated but that does not mean a big and damaging storm is coming.  It does mean that the market will be on alert if one does show up.  It is dry in Brazil and trees and fruit are stressed, but rains are starting to be reported in the region.  Mexican crop conditions in central and southern areas are called good with rains, but earlier dry weather might have hurt production.  It is dry in northern and western Mexican growing areas but there is some potential for some rains over the next couple of weeks.

Coffee:  Both markets were higher to finish the week, but both markets were lower for the week.  Trends on the daily and weekly charts have turned down in New York but London remains mostly in a trading range.  The weekly New York chart shows that the price action last week was more of a correction in the longer term up move than anything else and that futures are currently at weekly chart support levels.  It looks like demand is much better for Robusta these days, and the offers are starting to increase as the Arabica harvest is expanding in Brazil.  Wetter conditions are in the forecast for these areas this week.  The daily charts show mixed trends.  Good conditions are reported in northern South America and improved conditions reported in Central America.  Colombia is having trouble exporting Coffee right now due to protests inside the country.  Conditions are reported to be generally good in Asia and Africa.

Sugar: New York and London were lower with London the leader on ample supplies of White Sugar available to the market and forecasts for improved growing conditions in Brazil.  The weekly charts show down trends in both markets.  There is plenty of White Sugar available in India for the market and monsoon rains are promoting good conditions for the next crop.  Southern growing areas of Brazil are getting some beneficial showers, with Parana and parts of Sao Paulo getting the best rains.  Production has been hurt due to dry weather earlier in the year.  Thailand is expecting improved production after drought induced yield losses last year.  Ethanol demand is returning to the market as more world economies open up after the pandemic.

Cocoa:  New York was lower in range trading last week but London was near unchanged.  A strong US Dollar late in the week hurt New York prices and helped in London.  The daily charts show sideways or down trends in both markets.  The harvests are over in West Africa and ports there have been filled with Cocoa.  The weather has been a little too dry for best production prospects for the next crop, but above average rains were reported in West Africa last week.  European demand has been slow.  Asian demand is improved.  North American is improved.  The supplies are there for any increased demand.