I just turned off the television. There wasn’t anything wrong—there was just nothing. As I go through my day, I stay tuned to CNBC, albeit with the sound down low, simply to have background activity. But today, I just can’t get there. I keep asking myself the same question when I hear their comments— so what?

Usually, I enjoy some of the banter, and I recognize that most of the people floating across the screen are very smart and accomplished. But I don’t feel edified. In my head, I’m playing an endless loop of old quotes and comments that end up sounding like a game of “Pick a Platitude.” It goes something like this:

While history doesn’t repeat, it rhymes. The markets can stay irrational longer than you can stay solvent. When the tide goes out, we’ll find out who’s been swimming naked. It’s never different this time.

I think these words are my natural defenses to what seems like a constant barrage of explanations as to why the markets will remain high no matter what happens.

And why shouldn’t that be the case?

Price-earnings ratios are well above the long-term average. Robert Shiller’s more effective cyclically adjusted price-earnings ratio (CAPE) is also running hot. But it’s been like this for years, with no serious pullback, so why even talk about valuations?

The sun came up in the East today, and the markets moved higher.

Sure, there’s a good chance of war. Or rather, more wars. We’ve been in an armed conflict for 16 years—so long that we no longer consider Afghanistan to be a military hot zone. Now we’ve got a real chance of spilling blood and treasure on the Korean Peninsula. Rocket Man Kim tests missiles and nuclear weapons, we play war games off his coast with stealth bombers and special forces.

What could go wrong?

The markets go up, just as they should.

And then there’s my favorite. Slow economic growth. Even as the Federal Reserve printed $3.5 trillion and held interest rates at zero for years, we could barely manage 1.5% to 2.5% growth. As the chart shows, the Fed consistently forecast better days ahead, which never happened. 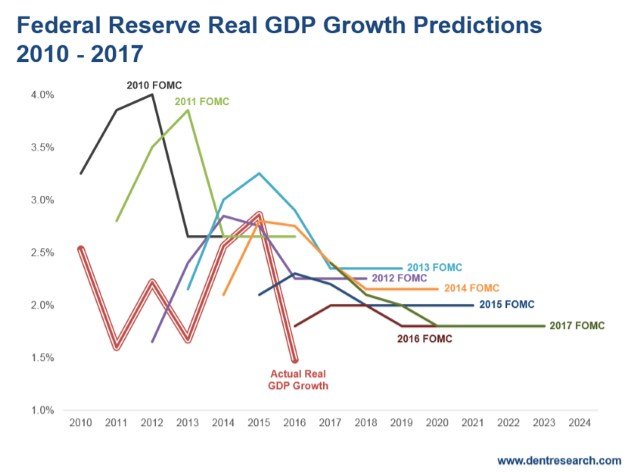 But why do we pay attention?

Low growth is an inconvenient puzzle, not a problem. This must be true because the markets went up.

Which all leads back to the platitude playlist in my head.

Investors were nervous ahead of the 2016 presidential election, for all the reasons listed above.

The markets seemed untethered from reality.

Then Trump surprised the world, and we had to change the list of possible outcomes for the next four years. Instead of more regulation, we’d have less. Instead of fighting business leaders, the White House would be a partner for growth. Suddenly, things appeared brighter. I wrote as much last fall, noting that Trump’s election gave investors a new reason for hope, and clearly most people in the markets felt the same way. The major stock indices have tacked on more than 20% since then.

But does it make sense?

Are we, to paraphrase Irving Fisher, at a permanently high plateau? Do P/E ratios, CAPEs, geopolitical events, and GDP growth rates no longer matter?

Earnings season is about to get into full swing, and I expect solid profits from Corporate America. We’re also in the all-important fourth quarter when Americans spend the most, which should be super-sized after the hurricanes.

Maybe we return to the new normal, the one hammered out of the past decade that includes central bank intervention of historical proportion, with more than $15 trillion of new money printed around the globe to bail out banks and support asset prices. In that case, we can rest easy, assured of higher prices for all.

Or maybe we return to just normal, that old world where valuations matter and long-term growth is a concern because we have to figure out how to pay for our retiring populations and healthcare while keeping our indebted youth afloat.

In such a scenario, the platitudes move to the fore, and the personalities on CNBC start talking about how such a turn was inevitable because, as we all know, asset prices revert to the mean—which is another platitude.

I guess it’s good to remember why such statements become platitudes in the first place—the words contain wisdom that withstands the test of time.