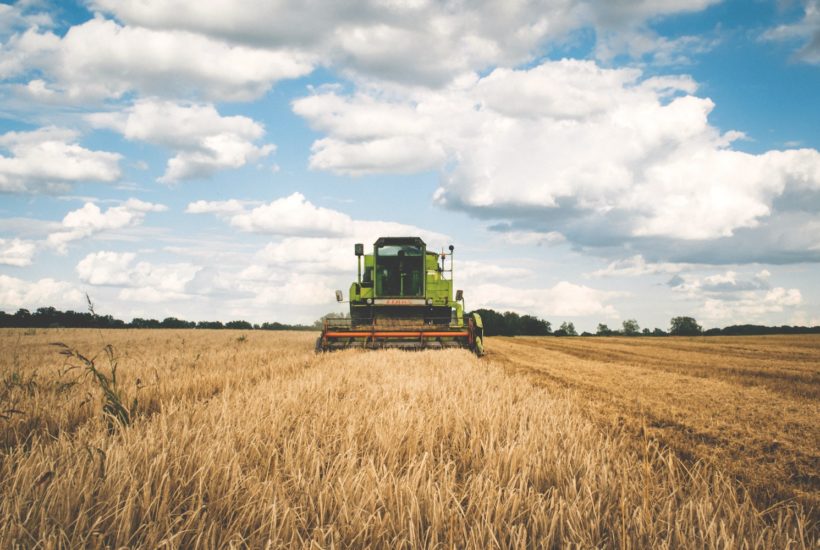 Wheat markets were higher for the week but held the previous weeks range.  Much of the price strength came on Friday in a positive reaction to negative USDA reports. Ending stocks estimates released by USDA were above the average trade guess for the US and above all trade guesses for the world. There should have been lower prices, but there were higher prices instead.  Ideas are that these are the worst estimates we will see and that the Coronavirus and its effects around the world are starting to pass. This implies that world economic conditions will start to improve if only slowly. The Coronavirus and stay at home orders in many states have created a rush of buying of Wheat products and have caught the mills short bought. They have been very active in buying Wheat in domestic cash markets, especially in the Great Plains, and basis levels moved sharply higher.  However, basis levels started to fall again last week. In addition, there was confirmation of restricted exports from Russia as Wheat prices have moved sharply higher as have flour prices in local markets. For now, the restrictions imposed do not seem to be onerous, but there are restrictions. It remains dry in most growing areas near the Black Sea. The dry weather pattern continues in these areas and must still be watched.

Corn and Oats both made very small gains after trading both sides of unchanged last week.  USDA released its monthly supply and demand updates and they were bearish for Corn as both US and world ending stocks were at the high end of trade expectations. Ideas are that USDA probably is showing the worst of the effects of the Coronavirus and the Saudi-Russian trade war and that things can get better from here on. The trade war between Saudi Arabia and Russia hurt domestic ethanol production and the effects of the Coronavirus remain part of the market.  Ethanol demand will not improve in the short term because people are not driving much due to the Coronavirus. Prices for Crude Oil and also gasoline and heating oil are at extremely low levels and ethanol plants in the US are shutting down or greatly reducing run times. Ethanol stocks are increasing even with the reduced processing due to the lack of driving in the US. That means a lot less Corn demand. The Saudis are using the cheaper price to punish Russia for balking at cutting production a few weeks ago but also to eliminate competition from shale oil producers in the US and Canada as well as biofuels producers around the world.  The loss in ethanol demand inside the US is very large and remains a major problem for all involved in the marketplace.

Soybeans closed higher last week on the rally in Soybean Oil and logistical problems in South America. Soybean Meal closed lower. Soybean Meal has given back all of its rally that started when DDG production dropped in the US.  Little or now ethanol production means little or no production of DDG as well, so a potential competitor to Soybean Meal in domestic and world markets has been effectively removed. Logistical problems caused by the Coronavirus in South America also played a major role. Argentina and Brazil are having trouble getting trucks from farms to crushers and exporters. The problems are especially in Argentina, where several towns have moved to block traffic in defiance of federal orders. Exports are not supposed to be affected, but there are signs that transportation inside the countries has become very difficult. USDA showed mixed data in its supply and demand reports that were released on Thursday. US data showed that ending stocks were at the higher end of trade expectations, but world ending stocks were at the lower end of trade expectations.

Rice was a little lower after a choppy week of trading and as the domestic situation remains tight. Domestic mills and exporters have provided the best demand as both groups seek coverage into the next crop harvest. All indications are that this is getting done and the commercial demand can start to back off for now. Some producers are selling the next crop and some significant hedge selling has been seen in new crop months in futures. Crop conditions are called good to very good in Texas and Louisiana but are more mixed in other states where it has been generally too wet to get much fieldwork done. Demand for US Rice remains generally positive and the export sales pace, in general, has been very good. Mills and exporters are calling previously bought Rice to keep the market supplied. This is happening mostly in Arkansas as Gulf Coastal areas are mostly sold out of Rice.

World vegetable oils markets were firm. Palm Oil and Soybean Oil were the upside leaders. Palm Oil got bullish news from MPOB on Friday when it showed increased production and demand for March. However, India is still out of the market and that could hurt Palm Oil demand shortly. All markets are still factoring in potential demand changes and the demand outlook for biofuels is poor. However, there are logistical problems as well, including loading problems everywhere, but especially in Argentina due to the closure of the borders and the inability of Malaysian and world producers to get tankers due to previous logistical problems caused by the Coronavirus. In addition, Malaysian producers are having trouble getting labor on the fields and the processing plants due to the Coronavirus. It is becoming an increasingly dire situation.

Cotton was higher last week as world stock markets continued to recover and as mills and fabric makers returned to work. China is open again and much of Southeast Asia is as well.  Much of the selling was related to lost demand potential due to the Coronavirus. The Coronavirus has closed malls across America and stores are not selling clothes. Clothes for the US market made in Asia are not being ordered.  Price in New York got very cheap and have started to turn higher. Prices need to rally more this week in order to complete a bottom formation. This might happen as ideas are that the worst economic news is in the rearview mirror now.

FCOJ was lower for the week on demand considerations here in the US. The move lower came despite a sharp rally on Friday that was tied to the USDA production reports. The current production estimate is down 1% from last month and 4% from last year. Florida is expected to produce 70 million boxes of Oranges on the back of mostly lower Valencia production.  Industry sources suggest that demand has improved as consumers returned to FCOJ due to the Coronavirus. Grocery stores in many areas sold out and need to restock. The early and mid crop harvest is about over and the Valencia harvest is increasing. The weather has been great for the trees as there have been frequent periods of showers and no severe storms so far this year. Many areas have been dry lately and irrigation is being used. Reports indicate that new crop fruit is progressing well.

Futures were higher in New York and slightly lower in London last week. The chart trends are mixed in New York and in London due to big production ideas, but producers are having trouble getting workers to pick and the exporters are having trouble getting workers for processing and loading. Brazil is currently reporting good conditions with a few showers. It is dry in other parts of Latin America. Central America has had less than normal rains, especially in Honduras. The Asian harvest is underway but producers do not seem to be selling on ideas that prices are too low.  The industry is still using certified stocks instead of trying to import from around the world.

New York and London closed a little higher in range trading. The next harvest is about to start in Brazil. The recently weaker petroleum futures make higher-priced ethanol that much more expensive to blend and cut demand. Prices in petroleum futures remained generally firm yesterday but still have a long way to go before Ethanol processing becomes profitable again. That makes more Sugarcane available for processing into Sugar. The Brazil mills are trying to cover the lack of White Sugar in the market and the price action suggests that they are succeeding. Reports indicate that little is on offer from India. Thailand might also have less this year due to reduced planted area and erratic rains during the monsoon season.

New York and London closed higher. Harvest is now over for the main crop in West Africa and the results so far are very good. Ideas are that demand is currently strong but less than before due to the Coronavirus problems in Europe. The reports from West Africa imply that a big harvest in the region. The weather in Ivory Coast is good. The weather is too dry in Ghana and Nigeria and there are fears that the mid crop is not developing well at this time.

(Featured image by freestocks.org from Pexels)