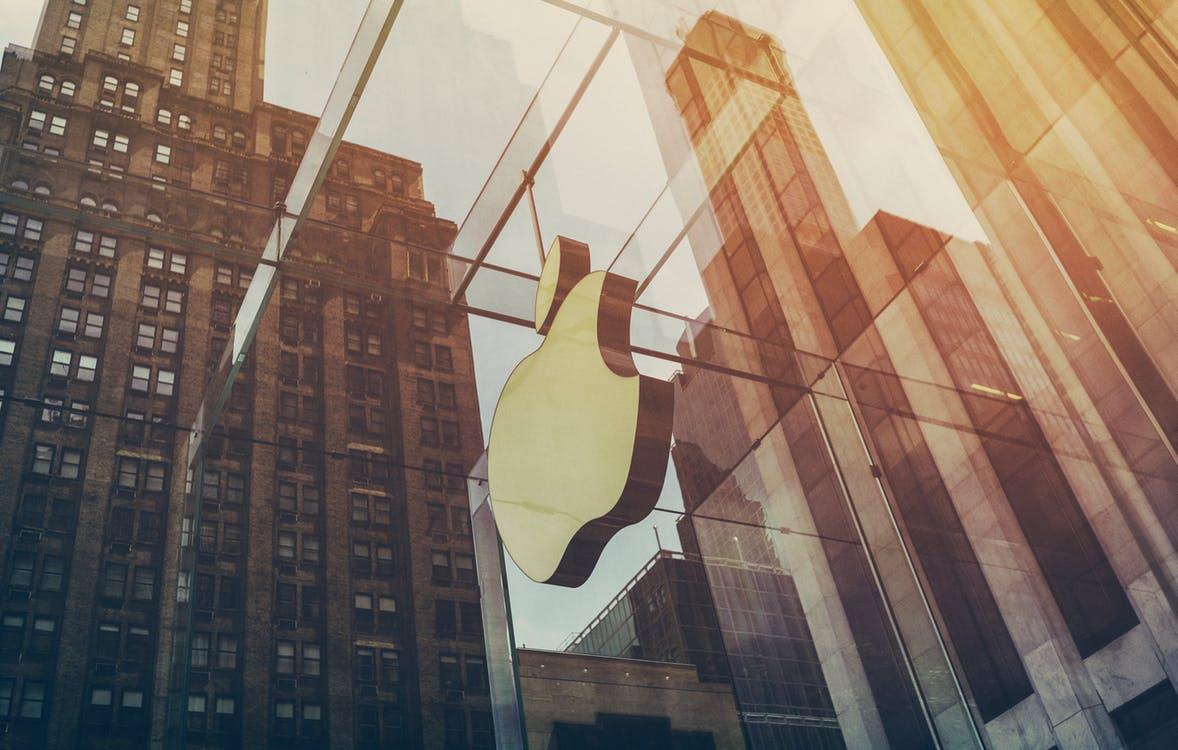 I must admit, Apple Inc. (AAPL) stock is my biggest holding. I bought the stock on several occasions, last time on February 22, 2016, at $96.26.  Considering March 24 close price of $140.64, it represents a 46.1% gain besides the dividend payments. After such a rally, I started thinking that it might be the right time to take the profits and sell the stock. However, before making any decision, I decided to analyze the company again to convince myself that it is the proper thing to do. In this article, I will show what brought me to the decision to keep holding the stock.

Among other things that have encouraged me to keep holding the stock was the fact that the legendary investor Warren Buffett has increased Berkshire Hathaway’s (BRK.B, BRK.A) investment in Apple’s shares recently. Mr. Buffett said that in January his company had bought 72 million of Apple’s shares. He started buying Apple’s shares in mid-2016. Berkshire’s stake in Apple is now about 133 million shares valued about $18.7 billion. Since Buffett began to buy Apple’s shares at about $110 a share, it is pretty obvious that he has achieved a nice profit so far.

Some investors might wonder how a value investor like Mr. Buffett, who has followed the strategy of his mentor Benjamin Graham and who has not been a supporter of technology stocks has decided to invest such a significant amount of money in Apple’s stock. However, in my view, Apple’s stock fits very well into Buffett’s valuation of a company, and in the following, I will show why is that.

A Ranking system sorts stocks from best to worst based on a set of weighted factors. Portfolio123 has a ranking system which allows the user to create complex formulas according to many different criteria. They also have highly useful several groups of pre-built ranking systems; among them the “All-Stars: Buffett”. The ranking system is based on investing principles of Warren Buffett.

The “All-Stars: Buffett” ranking system is quite complex, and it is taking into account many factors like; book value growth, operational P/E, price to book value, trailing P/E, price to Tangible book value, price to cash flow and EPS Stability, as shown in the Portfolio123’s chart below. 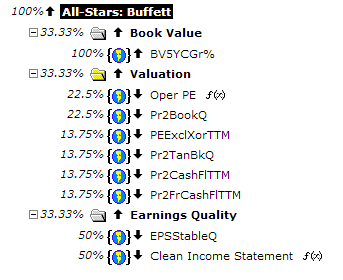 The back-test results are shown in the chart below. For the back-test, I divided the 6,221 companies into twenty groups according to their ranking. The chart clearly shows that the average annual return has a very significant positive correlation to the “All-Stars: Buffett” rank. The highest-ranked group with the ranking score of 95-100, which is shown in the light blue column in the chart, has given the best return – an average annual return of about 13.2%, while the average annual return of the Russell 1000 index during the same period was about 3.9% (the red column at the left part of the chart). Also, the second and the third group (scored: 90-95 and 85-90) have yielded superior returns. This brings me to the conclusion that the ranking system is very useful. 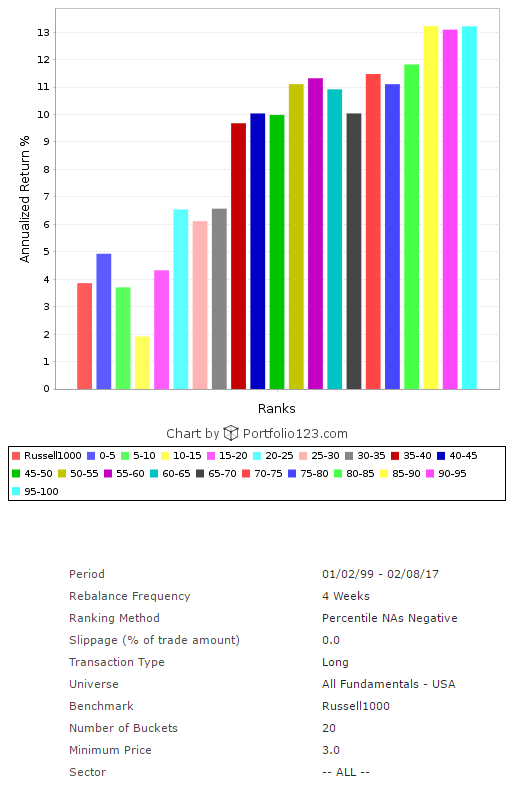 The not so surprising result is that after running the “All-Stars: Buffett” ranking system for all 66 S&P 500 companies, on March 25, Apple’s stock came first. The twenty best stocks according to this ranking system are shown in the table below. 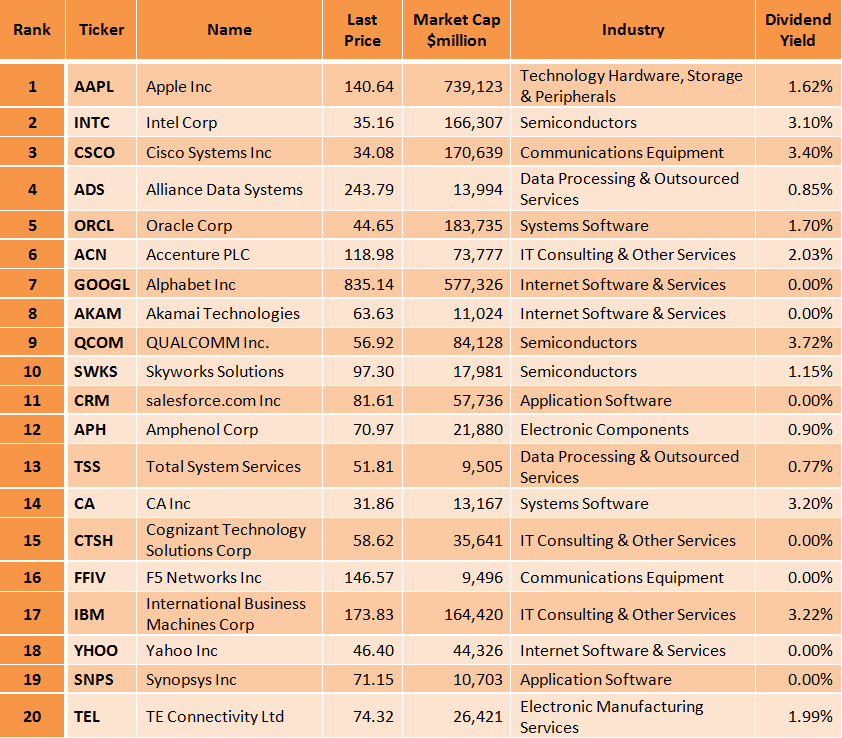 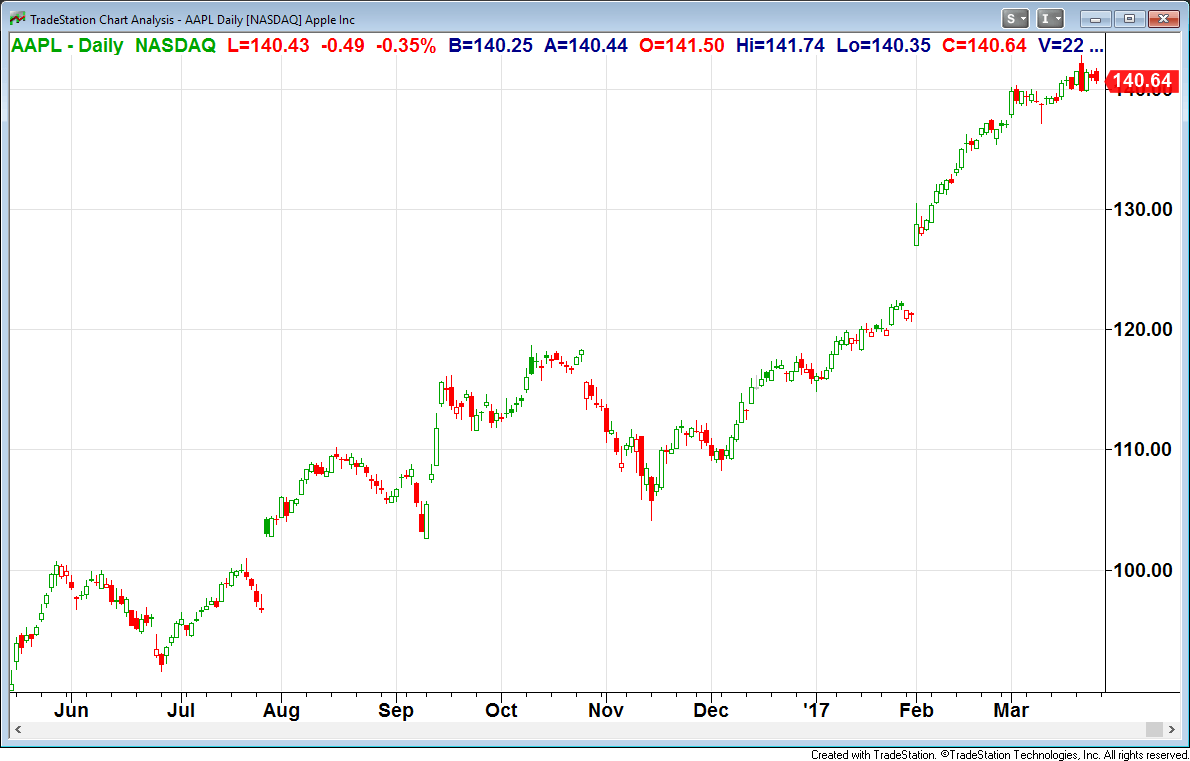 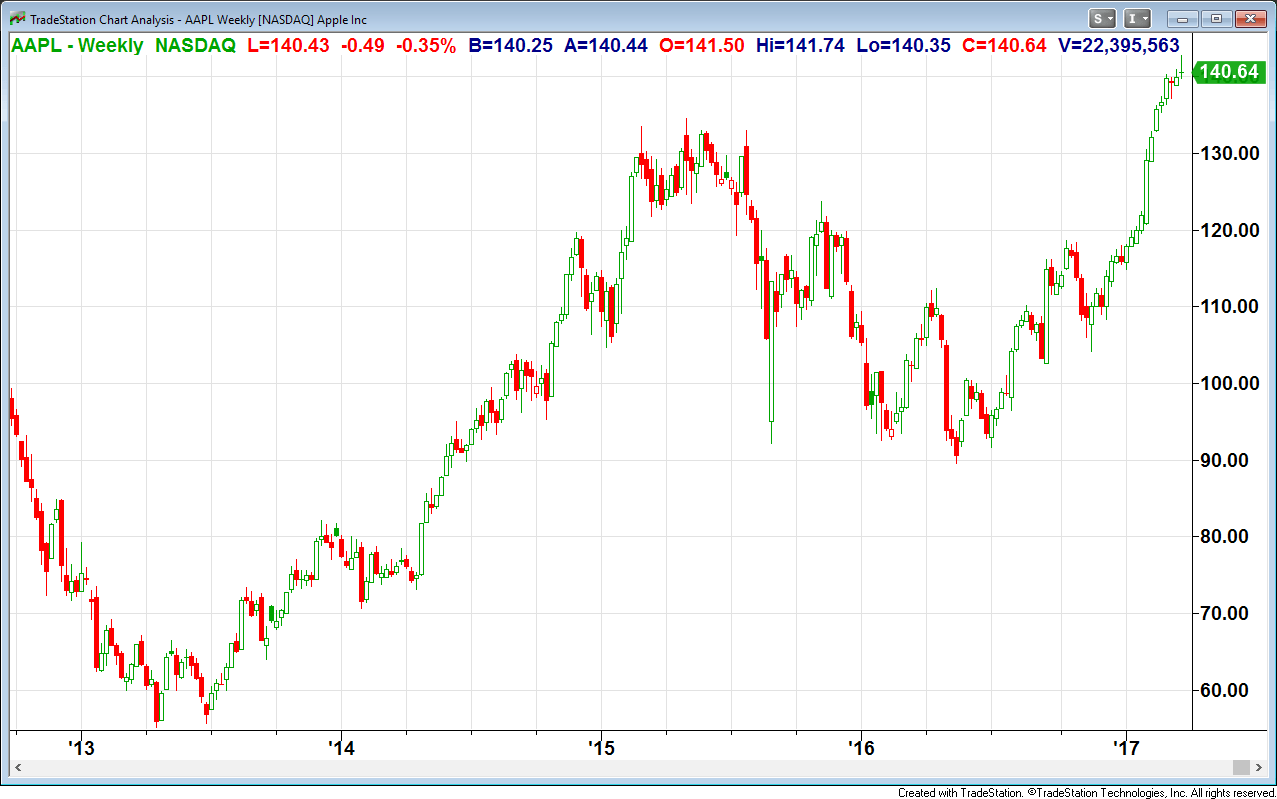 Considering its good valuation metrics and solid growth prospects, AAPL’s stock, in my opinion, is not expensive. AAPL’s trailing P/E is at 16.84, and its forward P/E is low at 13.86. The Enterprise Value/EBITDA ratio is low at 10.97, the price to free cash flow ratio is at 18.32, and the PEG ratio is at 1.82.

Apple generates high free cash flow and returns substantial capital to its shareholders by stock buybacks and increasing dividend payments. In April 2016, the company announced a $50 billion increase in its capital return program. According to Apple, it is committed to returning $250 billion to shareholders by the end of March 2018. At the same time, the company raised its quarterly dividend by 10%, to $0.57 per share. Apple started to pay a dividend in April 2012. The present annual dividend yield is at 1.62%, and the payout ratio is only 26.6%. The annual rate of dividend growth over the past three years was at 10.2%.

Although Apple has significantly outperformed the market in the last few years, in my opinion, the AAPL’s stock still has room to grow. In addition to its compelling valuation, Apple has high growth drivers among them the new iPhone 8 which is expected to be released in the third quarter of this year, its fast-growing services segment and the increasing popularity of the Apple Watch 2. The average target price of the top analysts is at $151.80, indicating an upside of 7.9% from its March 24 close price of $140.64. However, in my opinion, shares could go even higher than that.