November hot topic in the grain market was the Indian government’s decision to double its import duty on wheat. The wheat import duty was raised from 10 percent to 20 percent from November 8 in order to support national growers and restrict deliveries of cheaper wheat from abroad. This news directly concerns Black Sea wheat exports to India, mostly from Ukraine.

As a reminder, India imported wheat in the previous two years because of drought and crop failures in the country. In the 2016/17 season, India became a net importer of wheat for the first time in six years. The country imported 5.9 MMT of wheat in MY 2016/17, including almost half (2.9 MMT) from Ukraine. Other Black Sea wheat suppliers included Russia and Bulgaria. 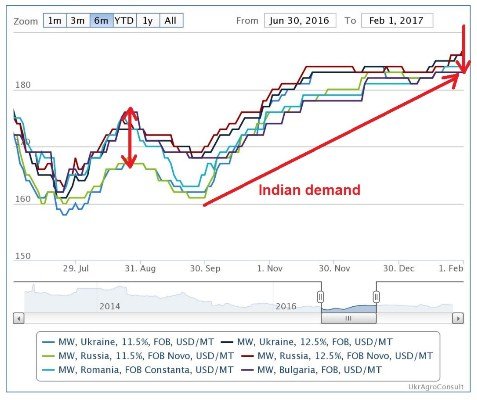 Some hopes and expectations were definitely pinned on India in the current 2017/18 season. And they did come true to some extent. So, according to preliminary information of marker participants, India has imported some 630 KMT of wheat from Ukraine and roughly 180 KMT from Russia this season, but the country stopped purchases before the import duty increase. The domestic market of India was already saturated by the moment of the duty introduction. As we remember from last year’s experience, even a 25% duty charged on wheat imports in India before the fall of 2016 did not curb supplies considerably, since the domestic market was tight at the time. Of course, following its reduction to 10% and then to zero, the market opened up to a full degree and enormous shipments began.

Nonetheless, we see no threat to Ukraine in the “closure” of India’s market. Yes, the news about the duty slightly pulled down export prices for Black Sea wheat (down another $2/MT FOB for 11.5 percent-protein wheat), which had already been pressured by weakened demand and competition in the region. 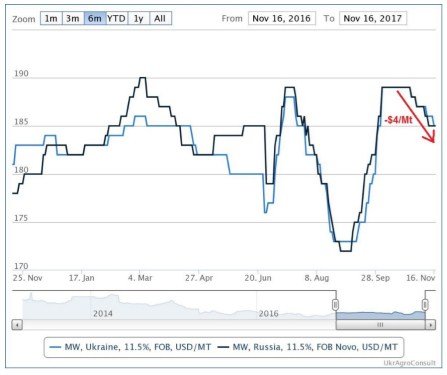 However, the stoppage of sales to India poses actually no threat of failure to realize Ukraine’s wheat export potential.

Firstly, 2017/18 exportable stocks of Ukrainian wheat are down 1 MMT (almost six percent) from last year. The current pace of wheat exports from Ukraine is justifiably on average six to seven percent slower than last season.

Secondly, the absence of Indian demand is quite offset by growing demand from other key end markets for Ukrainian wheat. So, Egypt imported almost 20 percent more wheat from Ukraine in the first four months of MY 2017/18 than at the same time last year (over 900 KMT). The European Union also purchased more Ukrainian wheat at the time: over 570 KMT, or up 58 percent year-on-year. Tunisia imported 23 percent more, or 265 KMT, while Turkey purchased 230 KMT against 25 KMT at the same time a year ago. However, Indonesia has managed to become the main breakthrough in the new season: the country has already replaced India. Ukraine exported 1.35 MMT of wheat to Indonesia in July-October 2017/18 against 1.61 MMT for the whole last season. It is planned to ship another roughly 140 KMT in November.

Thus, we expect no problems with Ukrainian wheat sales this season. The closure of the Indian market will not leave any wheat volume up in the air. Additional demand from other importers of Ukrainian wheat will remove surplus from the market as much as needed.

However, speaking of more distant prospects, the Asian market involves another important point: when India enters the export market with its wheat, Indonesia switches thereto and stops or minimizes imports from Ukraine. Still, Ukrainian wheat gets Indonesian demand in years of crop failures or short exportable stocks in India. Thus, with regard to the Indian threat, it lies rather in possible loss of other Asian markets where Indian wheat may compete with the Ukrainian product. 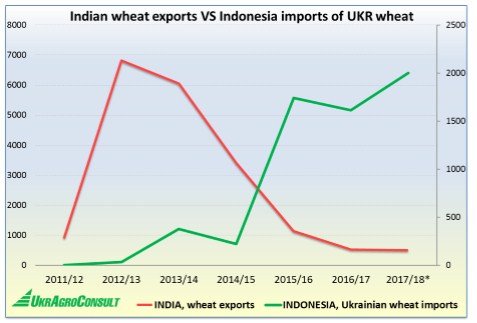