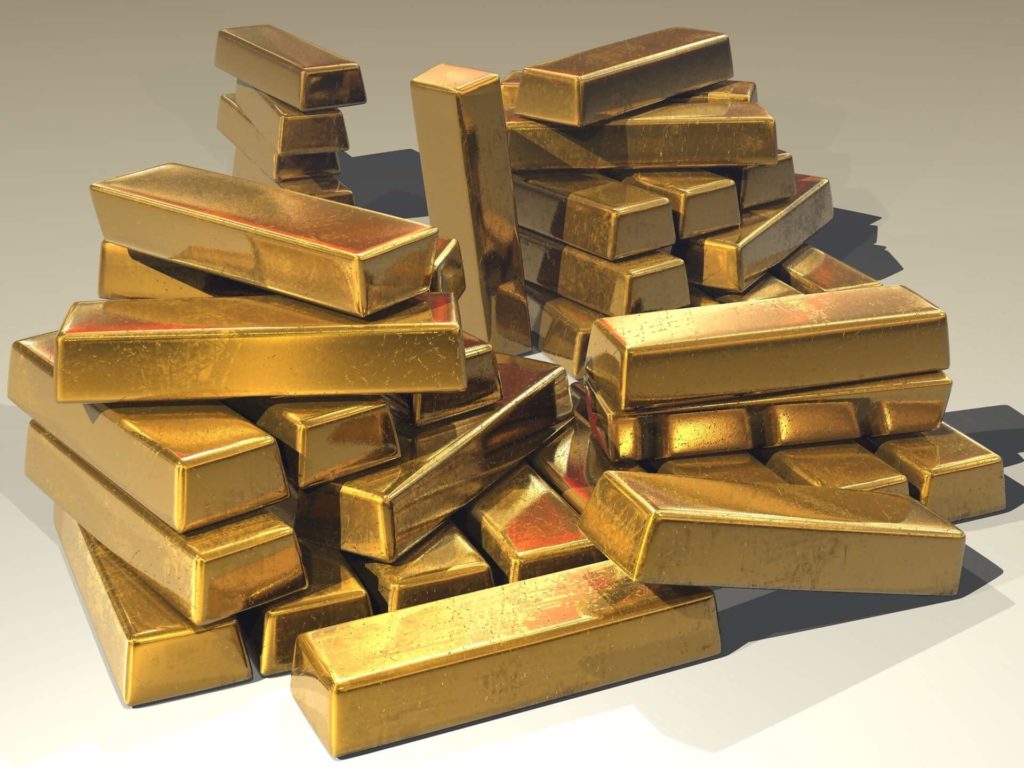 No. I’m not flip-flopping!

As I told subscribers to our Boom & Bust monthly newsletter in November, I stand by my forecast that gold must still lose about 65 percent of its current value before we hit the bottom of this latest commodity cycle, around 2020 or 2023. And when the markets unravel, as they must, gold will tumble, just like it did in 2008. It’s NOT a safe haven in a deflationary environment like it is in an inflationary one!

But I also told them that after this cycle has wrapped up and we head into the upward swing of the next one, then gold will soar, along with several other very specific commodities.
The next iteration of this cycle just ahead should prove to be the biggest boom in commodities yet.

There’s a trick to this, though.

The general commodity index (CRB) has one of the most clockwork-like cycles I’ve ever seen. It’s a full cycle of 30 years. But, the commodities within that index don’t cycle as smoothly, some presenting much more up and downside potential than the broader index.

The bottoms are more variable.

After the 1920 top, commodities bottomed in 1933, trending down for 13 years. However, after the 1951 top, the index only bottomed again in 1968—17 years later! And after the 1980 peak, commodities took 21 years to bottom out, although most of the losses occurred in 1986. The first six years of that downward leg of the cycle were brutal before prices wafted more sideways and a bit farther down until 2001.

Despite all of that, the commodities cycle is one of the most reliable in my arsenal. It really doesn’t get better than this on its longer-term cycle for peaks. See for yourself: 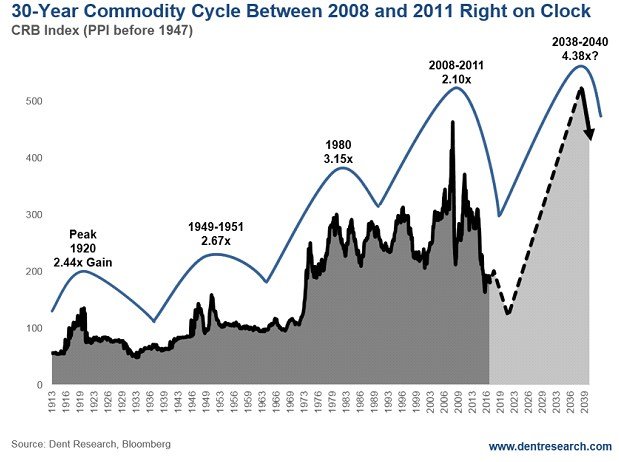 The dual 2008/2011 peaks led this commodity bubble burst around the world and looks close to a bottom in the years ahead.

The first peak in mid-2008 was driven mostly by energy, industrial metals, and agriculture. The second peak in early 2011 was thanks mostly to precious metals and some industrial metals like iron ore or copper.

While gold has not yet hit my next target of near $700 an ounce (range of $650 to $750)—and mark my words, it will —I do believe we’re reaching the end of the commodities downturn, which will wrap up likely by early 2020 and by 2023 at the latest. The biggest clue is the 80 percent crash in crude oil and iron ore.

2023 is the most natural bottom from a 2008 peak, forming a 15-year down cycle. But we may see some signs of new life earlier because this downturn has been so extreme thus far… and because the demographic force of emerging countries will directly impact commodities. They will likely turn up sooner than major developed countries like the U.S.

Gold bugs are right. We may well see $5,000 per ounce, but only during the next commodity boom. First gold has some excess weight to shed.

Commodities have the most extreme of cycles. That’s why the best traders make their hay in this sector. Sudden changes in weather or natural disasters like hurricanes or fires, or mining strikes can cause sharp short-term fluctuations, often like an exploding bomb!

That’s why I suggest that you don’t trade alone in this volatile arena. Find someone with a proven system to help guide you.

There are particular commodities that perform best in a world driven more by the fast-growing and urbanizing emerging countries. And that driver really is the key to the next commodities boom.

Although most commodities, from agriculture to energy, go up and down in longer-term, 30-year cycles, there are differences in our ability to ramp up supply (elasticity) when demand accelerates.

It’s easier (and cheaper) to cultivate more land for crops or livestock than it is to drill deeper wells for oil or dig deeper mines to extract the industrial metals like iron ore, coal, lead, nickel, or copper.

So, as the emerging world dominates growth in the next global boom, it will require more basic commodities like rice and corn and rubber. But precious metals, industrial metals, and energy will also have a place.

The best way to forecast such future needs and appreciation potential is to see how different commodities performed in the last commodity cycle boom from around 2001 into 2008/2011.

(The chart is courtesy of Dent Research)