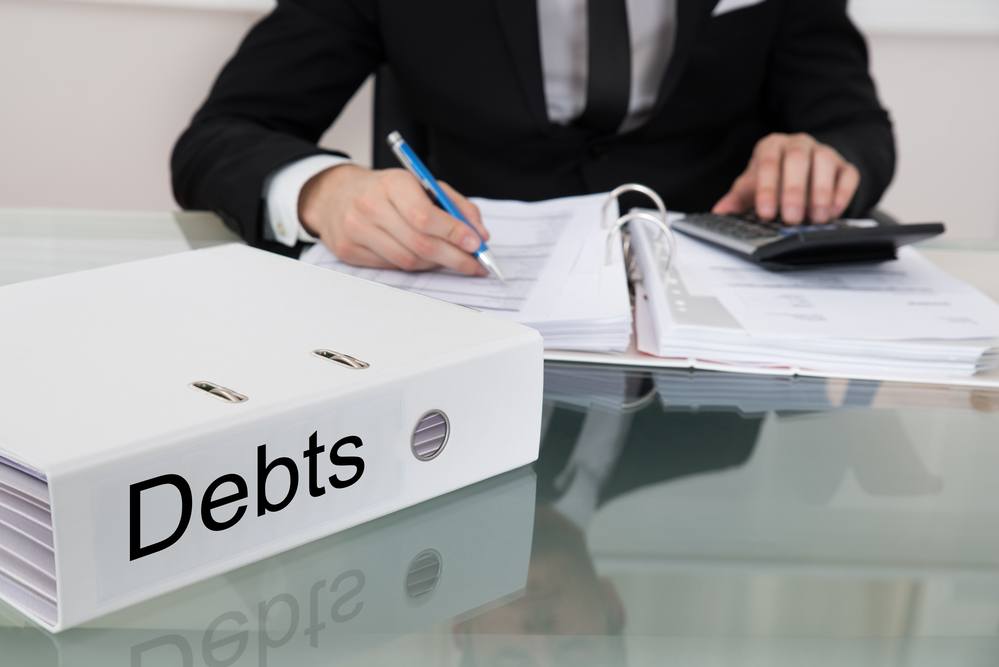 The 2008 financial crisis was well overdue, what with predictably slowing demographics, especially in the U.S. at first, and an unprecedented debt bubble in the developed countries.

The trigger was the subprime crisis—a small but high-risk sector of really bad loans that started to blow up when everyday households started to default on mortgages they could never afford in the first place. But that was only the trigger.

Since early 2009, we’ve seen unprecedented money printing to save the banking system and economy from a depression, and most of the new debt has accumulated in the third world. A McKinsey study shows that emerging markets have taken on $57 trillion in additional debt through 2014, with more to follow.

Like 2008, this too will blow. The trigger this time looks to be corporate loan failures in emerging countries, starting with Turkey and the worst, Venezuela.

Turkey, like China, greatly over-expanded after 2008 with cheap dollar-based loans. Such foreign loans aren’t in their control and make them more vulnerable to defaults.

And now, with the dollar and U.S. interest rates rising, Turkey is getting into trouble quickly.

Venezuela’s over-spending on social programs, from oil revenues, when they were high and dependence on foreign debt, was more extreme and that’s the classic scenario where you get hyperinflation. You must print large amounts of money to pay off increasingly expensive foreign debt—but unlike the developed countries, that money doesn’t go back into the economy to help prop it and the banks up.

Rather, the currency keeps crashing from such outflows creating internal inflation from imports, and it makes those foreign loans massively more expensive… so they print much more money until they approach one million percent inflation. Welcome to Venezuela today.

This chart tells the story. 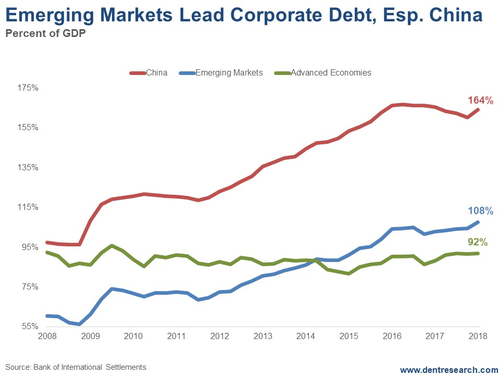 The developed countries debt spree, especially corporate, peaked in 2008. It’s been flat ever since, with a brief drop as a percentage of GDP in 2014. It was 94 percent in early 2008 and is 92 percent today. They didn’t de-leverage, nor leverage back up further.

As the McKinsey study showed, all the action shifted to the emerging countries when cheap dollars (and euro and yen) made foreign borrowing easier and cheaper.

Emerging countries went from 55 percent of GDP in late 2008 to 108 percent—doubling—today, with the strongest surge after 2011 when Europe joined the U.S. and Japan with all guns blazing in money printing together.

Emerging countries normally don’t have corporate, or any sector, debt ratios nearly as high as developed countries because they’re not as wealthy or credit-worthy. But now China and emerging countries corporations are the most in debt… and they tend to default first.

China’s stock market has been down as much as 25 percent recently and the emerging market indices have been down 22 percent, with Turkey down 30 percent and Venezuela down 40 percent.

This is a major divergence, warning something is wrong, and the next crash is coming.

But even in developed countries, the risks are rising. The percentage of BBB (near junk) ratings on U.S. corporate bonds has risen from 32 percent to 48 percent, currently at 47 percent.

And there’s a wall of high-yield (actual junk) debt to be re-financed between 2019 and 2024 as I cover in the November Boom & Bust newsletter.

Europe has seen a more ominous trend going from 18 percent BBB to 48 percent since late 2008 and their economy has and will be weaker than ours. European stocks have not made new highs in recent months, creating another divergence with U.S. stocks.

Corporate debt, especially in emerging countries, is likely the biggest trigger for the next crash and financial crisis… and its already clearly in motion.

China will be last to get hit because it’s much more massive debt is internally-driven, and not foreign. Regardless, it will fall the hardest when the shit does hit the fan!