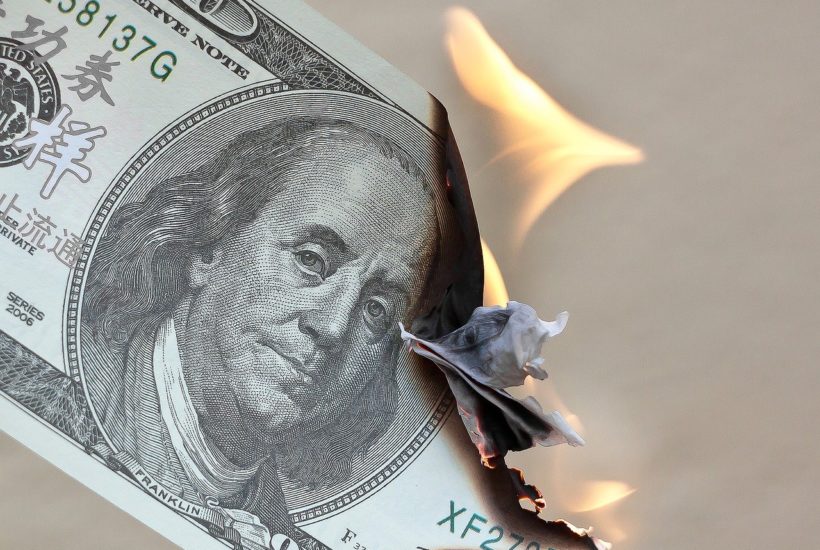 The rates of growth and inflation are now surging in the U.S., but that shouldn’t be a surprise to anyone. What else would you expect when the Federal government has sent $6 trillion dollars in helicopter money to state and local governments, businesses, and individuals over the past year. Then, at the same time, millions of homeowners are told they don’t have to pay their mortgages. In addition, our central bank has printed trillions of dollars to push asset prices through record-high valuations and continues to create $120 billion each month in order to keep Wall Street happy.

All the above is happening while the economy opens up due to the dissemination of COVID-19 vaccines. The markets have anticipated this economic boom and have now nearly fully priced it all in. For instance, home prices have soared by 12% year over year in February, which was the fastest increase in the past seven years. And, the total market cap of equities is now over 200% of GDP—about twice the level reached at the start of the Great Recession.

But that rate of change in growth and inflation will be peaking in the next two months. I’ll explain why that is and what that means for investors?

First off, borrowing costs and the rate of inflation are much higher than they were a year ago. Consumer Price Inflation jumped by 2.6% year-over-year in March, as compared to only a 0.3% increase y/y in April 2020. And, the rate on Benchmark Treasuries has increased by more than 100 bps since last year. Not only this, tax rates are headed higher on both corporations and on those consumers who are traditionally responsible for creating job growth. A rising cost of living, increased debt service payments, and an attack on capital formation—and indeed capitalism itself–should serve to vastly inhibit economic growth later this year and especially into 2022.

This dovetails into the overall fiscal cliff that is rapidly approaching. The $6 trillion in pandemic assistance over the past year was a powerful adrenaline shot that greatly boosted consumption. But artificial sugar highs are temporary, and there are no more comparable helicopter money drops in the works. Even if all of President Biden’s proposed $4 trillion infrastructure and American Families Plan is made into law, it will be spaced out over ten years. Hence, the impact will be much more muted and diffused than the previous two massive fiscal carpet bombs. Also, the total of 18 months’ worth of mortgage forbearance ends on approximately 2.7 million distressed homeowners come this fall. And, the Pandemic Emergency Unemployment Compensation Program provided 53 weeks of additional jobless benefits. That extra $300 per week expires the week ending September 5, 2021.

Secondly, we are approaching peak COVID-19 optimism. The number of individuals getting vaccinated per day is now dropping quickly. In other words, peak vaccination in the U.S. has arrived. The U.S. averaged 2.4 million vaccinations per day during the last week of April, according to the Centers for Disease Control and Prevention data. That level is down from a peak of 3.4 million vaccinations administered on April 13. What is more discouraging is that the global death rate from COVID-19 is rising sharply. The 7-day average was 13,235 deaths on April 30. That is twice as high as it was during the April 2020 peak and four thousand more deaths per day than the month-ago period. Come this fall and winter, we will learn more about the longevity of these vaccines. What exactly is the duration of the immunity they provide, and do they protect from the more contagious and virulent variants that are currently ravaging places like India, Laos, and Thailand? We may need to re-vaccinate the majority of the population all over again. If so, how smoothly will that happen? The current belief is that the pandemic will be behind us come this summer. But we must be vigilant against a COVID resurgence later this year, which will likely bring with it the associated economy-killing restrictions and lockdowns.

And thirdly, the most salient factor that is set to implode the array of asset bubbles that are currently in existence is the monetary cliff. Fed-Head Jerome Powell should officially announce the plan to taper his asset purchase program this summer. In fact, Dallas Federal Reserve Bank President Robert Kaplan thinks the time to discuss tapering has already arrived. He said the following on April 30: “We are now at a point where I’m observing excesses and imbalances in financial markets,” He especially highlighted stock valuations, tight credit spreads, and surging home prices as the real dangers. However, the truth is the unofficial tapering of asset purchases is already underway. The Fed’s balance sheet increased by $3.2 trillion during all of 2020, but that figure should “only” increase by $1.5 trillion for this year. Turning off the monetary firehouse completely in 2022 will be far more destructive than the last time it occurred in the years following the Great Recession.

The last time the Fed announced a plan to taper its $85 billion per month QE program was back in May 2013. As a consequence, the S&P 500 dropped 6.5% in three weeks. But that relatively minor hiccup occurred because the stock market was extremely cheap in comparison to where it sits today. The Total Market Capitalization of Equities compared to GDP was just 103% at the time of the first Taper Tantrum. In sharp contrast, it is 205% of GDP today! And Jerome Powel’s $120 billion per month QE scheme is almost 1.5x the size of then-Fed Chair Ben Bernanke’s money printing endeavor.

Also, during the two years prior to “The Taper Tantrum” (from May 2011 thru May 2013), the Fed’s balance sheet increased by just $600 billion. This compares to the whopping $4.7 trillion of asset purchases that will have occurred from January 2020 thru the end of this year—assuming the Fed doesn’t start reducing its purchases until 2022. Those trillions of dollars helped send asset prices to the thermosphere and have inflated a much bigger bubble than has ever existed before. Hence, this removal of monetary support should carry much greater significance this time.

Yet another consequence of the Fed’s monetary manipulation is the effect it’s having on the corporate bond market. U.S. corporate debt outstanding has surged to reach $10.6 trillion. That is a record high 50% of GDP. For context, this figure was just 16% of GDP back in 1980. Junk-rated debt yields are at the tightest spreads to Treasuries, and their yields are the lowest in history. Of course, the yield on Treasuries has been massively distorted by the Fed as well. In fact, the government was able to sell $40 billion in T-bills on April 29 with a yield of exactly zero. Yes, the bubble in fixed income is incredulous.

Asset prices have been driven higher precisely because of the near $5 trillion in newly minted money that was thrown at Wall Street over the past two years. However, sometime next year, we will learn what happens to these bubbles when the monetary speedometer goes from $5 trillion to $0.

What all this means is that the rates of growth and inflation are about to slow. This isn’t a reason to panic…yet, but it does require a change in your investment allocations.  For now, the deceleration should be at a gradual pace for the remainder of this year, which means bond and bond proxies should start to fare better than the asset classes, style factors, and sectors that are geared towards a rapidly accelerating economy.

However, disinflation and slowing growth could morph into deflation and recession next year. Such macroeconomic conditions should prove devastating for these record asset bubbles. Good money managers must know how to appropriately navigate these cycles. And, most importantly, be able to determine when it is time to sprint for the emergency exit before the real chaos begins. That requires the ability to know when to raise cash, move into short-duration bonds, get the long the dollar, and allocate to a net-short position in equities.

(Featured image by Foto-Rabe via Pixabay)