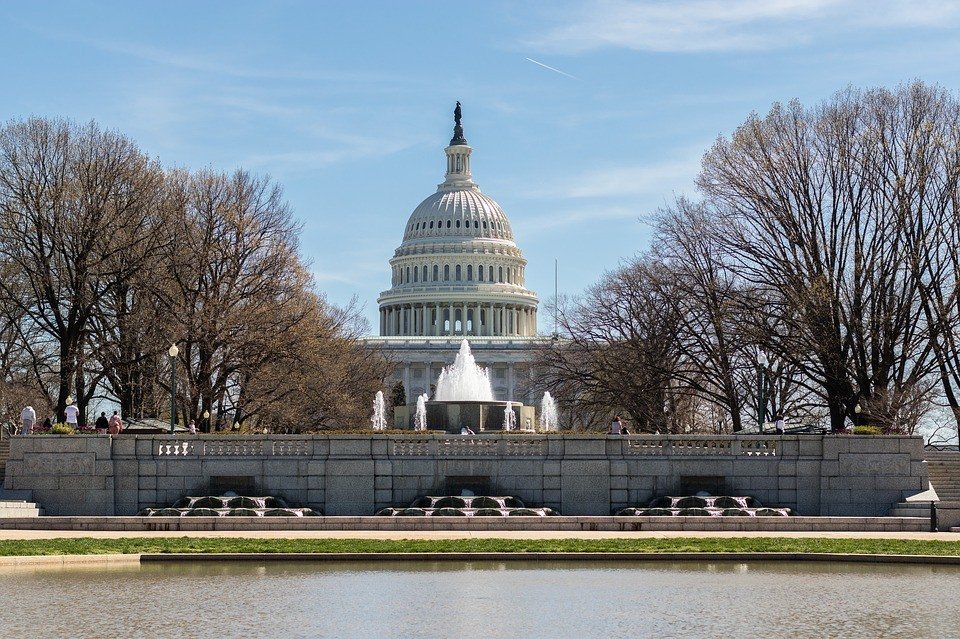 In light of recent political uncertainty connected with the firing of James Comey and talks of impeachment, the effects on the stock markets are inevitable.

The center of the universe appears to remain in Washington. Following the firing of FBI Director James Comey, an event that was almost without precedent, and, what’s worse, made personal by the President, the talk in Washington circles is actually turning to impeachment. The basis is that the firing of FBI Director James Comey was obstruction of justice given the investigation into possible coordination between Russia and the Trump campaign. With Comey sidelined, the justice department appointed former FBI director Robert S. Mueller III to serve as special counsel and lead the investigation into Russian meddling.

Where all this leads is moot as the firing, ongoing investigation, and talk of impeachment are unnerving markets. The initial reaction was a 300-point drop in the Dow Jones Industrials (DJI). By the end of the week, the bounce back only left the US stock markets off roughly 0.4% on the week. The record-setting NASDAQ suffered only marginally more, losing 0.6% while the Dow Jones Transportations (DJT) dropped 1.4%. Buy on the dip mentality appears to be alive and well.

With a Republican-controlled Congress, any proceedings at this stage are likely to fail. Also, as Republicans hold a small margin in the Senate, it is unlikely the Senate would support impeachment with the required 62% majority. Things could change, however, following the 2018 midterms if the Democrats were to regain control of Congress and the Senate. Irrespective of that possibility, just the threat of impeachment could consume Washington, sideline Trump’s agenda, and bring the country to a halt. That, in turn, could have a negative impact on markets.

Remember that following what was known as the “Saturday Night Massacre” in October 1973 when Richard Nixon fired special Watergate prosecutor Archibald Cox leading to the resignations of Attorney General Elliot Richardson and Assistant Attorney General William Ruckelshaus stock markets fell by 43% over the next 14 months while gold soared 85%. Richard Nixon resigned in August 1974 rather than face certain impeachment in the Democrat controlled Congress and Senate.

SEE ALSO  Monzo’s losses quadruple amid growth in user base

Could the same thing happen again even if Trump is never actually impeached? The early verdict could be yes, but it is so far a “skimpy” yes. Since the firing of James Comey on May 9, 2017 the stock market as represented by the S&P 500 is off less than 1%. Gold, on the other hand, has jumped 3.1%. The US$ has also suffered as the US$ Index has fallen 2.4%. Political uncertainty makes for nervous markets. 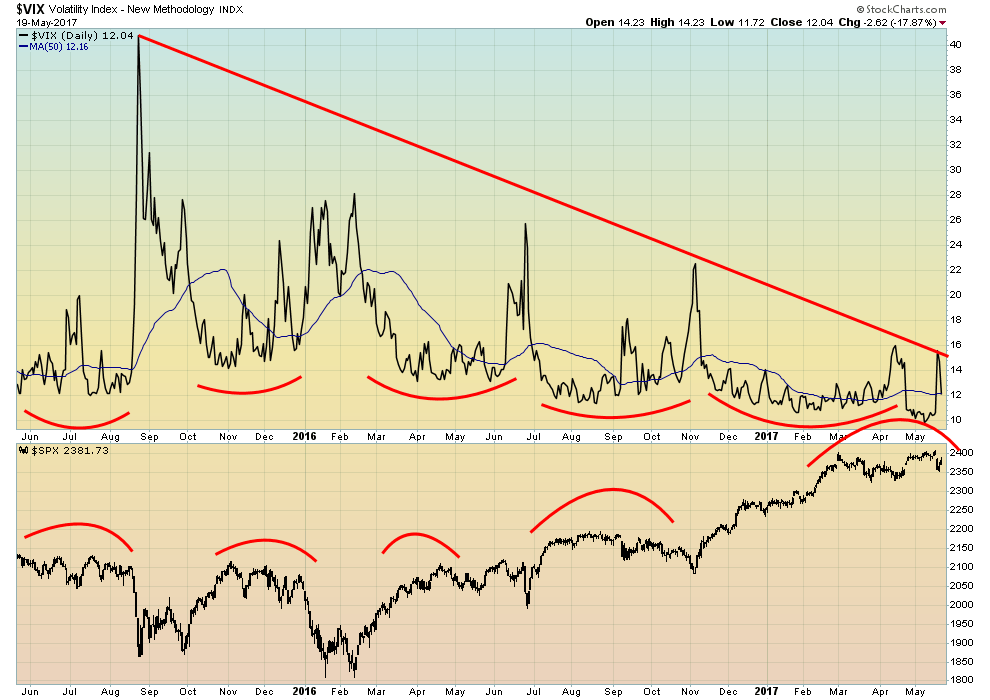 Extreme volatility can sometimes be short-lived. Despite the drop this past week, the VIX volatility indicator didn`t even approach the level seen at the time of the Brexit in June 2016. The S&P 500 becomes far more dangerous if it were to break the lows of the potential topping pattern. Those levels are seen at roughly 2,320 to 2,325. A firm break under 2,300 could project the S&P 500 to fall to the 2,230 to 2,240 level. Note that the 200-day MA is currently at 2,258. The 200-day MA is often tested during a bull market so a dip under the level is not unusual. A sustained decline under the 200-day MA would signal the start of a new bear market.

We are also reminded that the current bull market is quite narrow in breadth. Five stocks consume almost 42% of the NASDAQ and 12.5% of the S&P 500 by market weighting. The five, referred to by Gordon Long of MATASII Strategic Investment Insights as the “Generals” are Amazon (AMZN), Microsoft (MSFT), Facebook (FB), Apple (AAPL), and, Alphabet (GOOGL). It reminds us of other narrow breadth markets such as the “Nifty Fifty” rally of 1972 that preceded the 1973-1974 stock market collapse, as well as the last days of the 1987 rally preceding the 1987 stock market crash and finally the high tech and internet market of the late 1990`s preceding the tech wreck crash of 2000-2002. Gordon Long also noted that the market cap of the five “Generals” is about $1.5 trillion in a global stock market of about $70 trillion.

It remains our belief until proven otherwise, that the current decline is a wave 4 within the context of fifth of fifth waves to the upside. That leaves the door open to another rise to new highs once this decline is over. Impeachment or no impeachment, proceedings rattle markets. But as the proceedings ebb and flow so will the market until a new trend is established. It remains our belief that we are in the final throes of the current bull market and once complete a new bear market could get underway. 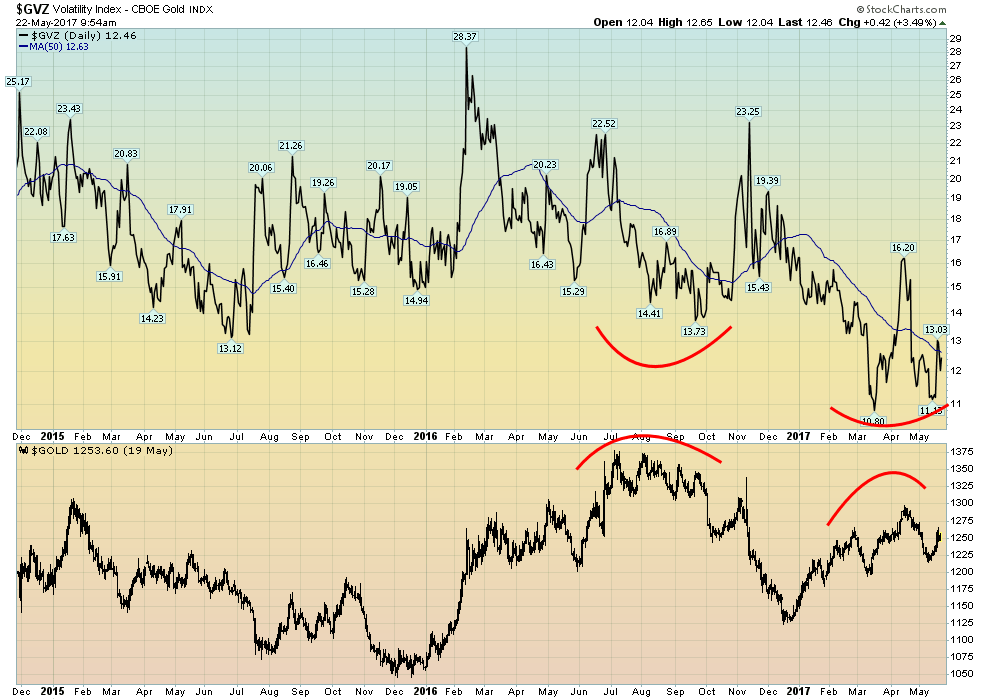 Political uncertainty makes for market uncertainty. And in that respect, the market uncertainty usually translates itself into falling stock markets and rising gold prices. Despite the bumps in gold prices from 2011 to 2015 gold remains the best performing asset since 2000 with a gain of 333%. The S&P 500 is up 62%. Yet it is gold that is maligned as the “barbarous relic.” The value of all of the gold in the world is only about $7 trillion vs. a global stock market 10 times the size.