“People say you can’t run everything in the world on the blockchain, but I really, really think it’s possible,” blockchain guru Joseph Poon said to CoinDesk back in August.

Poon knows what he’s talking about. He co-wrote the initial whitepaper for Bitcoin’s “Lightning Network,” which is key to scaling the cryptocurrency. And, more recently, he worked on a roadmap for Ethereum with none other than Vitalik Buterin, the founder of Ethereum.

Both men believe that Ethereum can eventually become a “world computer,” replacing all the server farms from Google and Amazon.

It’s important to remember this endgame because cryptocurrency volatility is blinding on a day-to-day basis.

Don’t let either of these scenarios distract you from the big picture. Our Ethereum price forecast is based on its fundamental growth.

There are three major catalysts for this trend, and that’s what we should be watching.

If you’re wondering, no, we are not referring to Raiden, the thunder god from Mortal Kombat. (Which, by the way, always struck me as weird. If he has the power to conjure lightning, why call him the “thunder god”? Those are two separate things.)

“Raiden” is a payment infrastructure that will make Ethereum scalable. Think of it as Ethereum’s answer to the Bitcoin Lightning Network (Raiden, Lightning—it’s obvious the cryptocurrency guys spent a lot of time indoors). It creates a lightweight shell for the core blockchain, allowing for more payments to be processed per second.

Are Bitcoins as truly a reserve form of money? (Source)

Peter Thiel recently called Bitcoin a “reserve form of money.” He’s not alone, either; I’ve heard a lot of people make similar claims. They’re essentially arguing that investors will treat Bitcoin like gold, rushing to it in times of uncertainty when the world is falling apart.

But that argument ignores the fact that most currencies are coming into existence on the Ethereum platform. All the ICOs you hear about are on Ethereum, meaning that they are raising money in Ether.

Shouldn’t this make ETH a safe haven as well?

There’s no question that the Ethereum Enterprise Alliance (EEA) is the largest consortium of corporations and blockchain experts. If we’re going to see cryptocurrencies make inroads into the Fortune 500, it’ll likely be via the EEA. 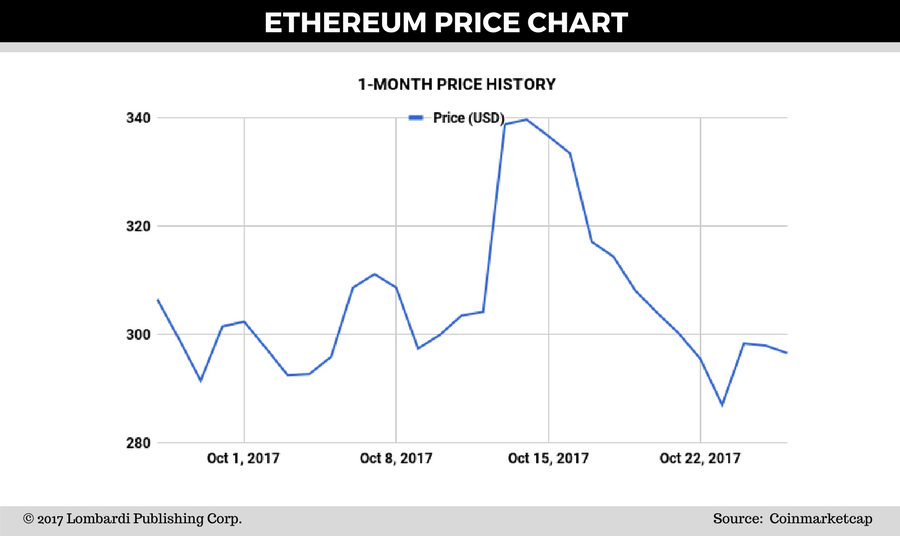 We believe it’s important for investors to keep an eye on these tailwinds because two months from now, it won’t matter that ETH prices dropped 0.52% on Friday morning. It won’t matter that the Ethereum to USD rate is near $297.86, or that it’s hovered at that level for a few days.

The daily Ethereum news will have changed by then, but the underlying catalysts will be very much the same: Raiden, ICOs, and the Ethereum Enterprise Alliance.