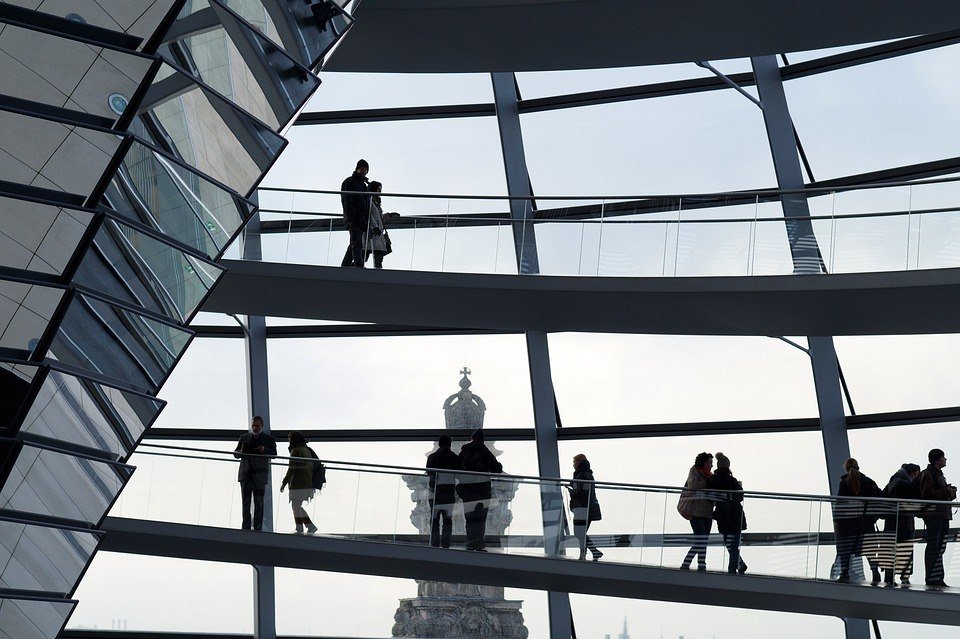 We admit it is difficult, but we are trying to push Donald Trump off as the lead-in. That is how “The Donald” is. He dominates the conversation. However, it is possible the focus should be on what appears to be a slowing in US job growth. The nonfarm payroll for May came in at a less than expected 138,000 jobs. The market had expected 215,000. Job growth is slowing on one hand; however, that was offset by a drop in the headline unemployment rate (U3) to 4.3%. Even when one takes into consideration the broader measure of unemployment (U6) that includes marginally attached workers and involuntary part-time workers, that measure fell to 8.4% the lowest in a decade. The Shadow Stats unemployment rate that is the U6 unemployment rate plus discouraged marginally attached workers unemployed over one year fell to 22% from 22.1%. In January 2017 that figure was at 22.9%.

Before we get too excited, however, it is worth noting that the fall in unemployment was almost solely due to a drop in the labor force participation rate that dropped to 62.7% from 62.9%. Three months ago, it was 63%. A decline in the labor force participation rate means that fewer workers are actually looking for work as they have most likely become discouraged and have dropped out. Interestingly enough, part-time employment rose 133,000 in May accounting for almost the entire nonfarm payrolls rise. Part-time employment is usually low paying, no benefits, and shaky employment at best. 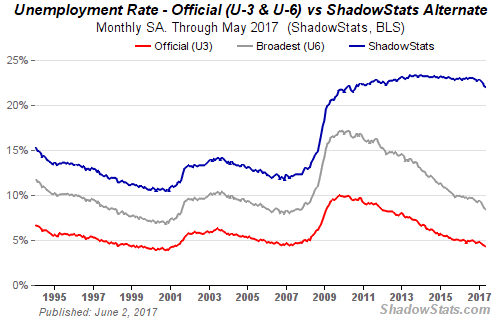 Declining job growth could create a conundrum for the Federal Reserve. Most agree the Fed is likely to hike interest rates again in June. Naturally, the surprise would be that they do not hike interest rates. But, not only are there are signs that job growth is slowing, but inflation remains stubbornly low, below the Fed’s 2% target rate. The core inflation rate dropped to 1.5% recently after being as high as 1.8% in February.

Globally there is also a lot of slack, especially in the industrialized nations. This could also be a dampener on inflation. As the Fed tries to raise interest rates, that in turn puts upward pressure on the US Dollar and the, as a result, the US imports disinflation into its economy. But a funny thing is happening on the way to the forum. The US Dollar has actually started to fall even as it appears money is still flowing into the US stock market, a market that once again hit new all-time highs this past week. We have seen this phenomenon in Japan too—as the Japanese Yen falls the stock market moves higher but when the Yen strengthens the stock market tends to fall. In the US it seems to be dollar up, stocks up, dollar down stocks up.

The third chart looks at the long-term picture and what we discover is a falling US$ has been reasonably consistent with a rising US stock market. During both the 2000–2002 Internet/High Tech crash and the financial crash of 2007–2009 the US$ Index was rising even as the stock market was falling. What we would probably discover is funds instead were flowing into bonds as protection in a falling stock market. And given a crisis, it was the old adage of a flight to quality including international flows into the US$. When things calm down the flows go elsewhere—into the stock market or back out of the country to other countries. 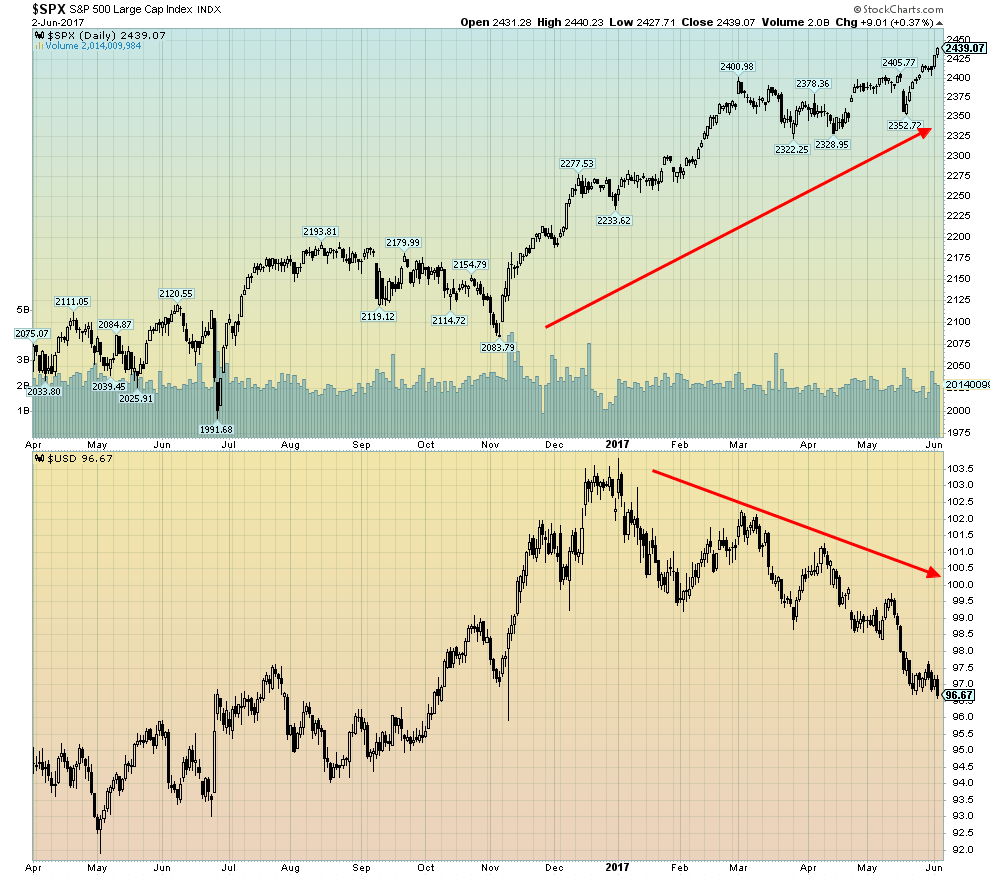 With the US stock market breaking out to new all-time highs one is tempted to believe that the recent correction is over. But it is not unusual to see a higher “b” wave than the previous top. Therefore, the recent correction that got underway in February may not yet be complete. The reality is there is little volume and no momentum behind this rally making it suspect. It is not unusual to see weakness into June before a counter rally develops into July/August. Watch for weakness. The most recent low was at 2,352 and if that breaks we are liable to make the “c” wave low near the “a” wave low of 2,320. After that, the summer rally should develop.

Gold, meanwhile, responded positively to the weak nonfarm payroll numbers on Friday jumping roughly $13. It is interesting to note that April’s nonfarm payroll was revised down to 175,000 from 211,000, but who is paying attention. That is a considerable drop for the first month revision. Further, the March nonfarm payrolls were revised down to 50,000 from 79,000. The past three months average is 121,000, well below the previous year’s 180,000 and barely what is needed to keep pace with population growth. The Fed rate hike in June is looking iffy. Very iffy. 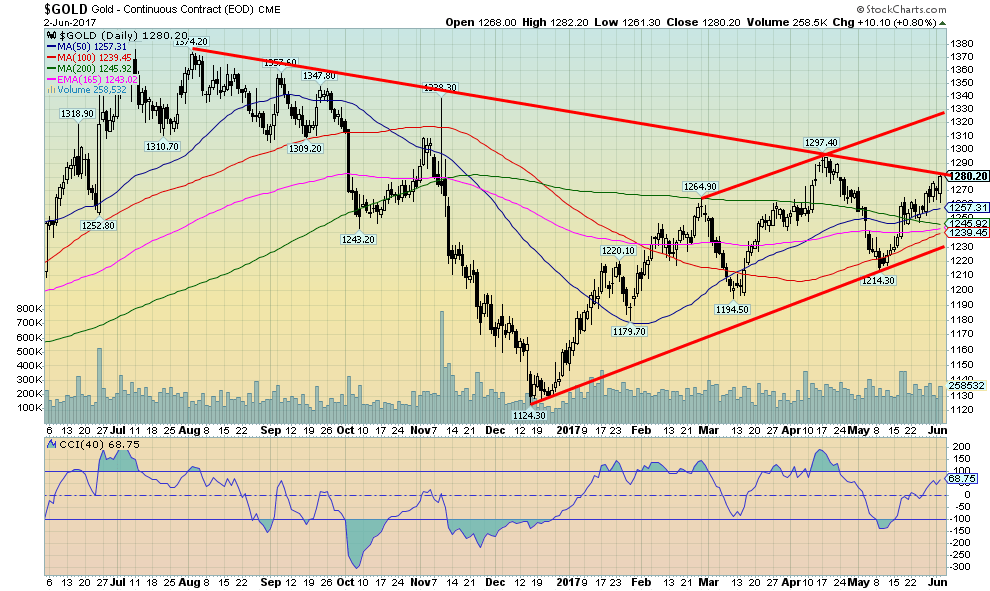 If there is a concern it is the gold stocks. Both the Gold Bugs Index (HUI) and the TSX Gold Index (TGD) fell this past week losing 1.7% and 0.4% respectively. This was against the backdrop of gold gaining almost 1% and silver up about 1.2%. Another concern is the commercial COT that slipped this week to 27% from 28%. It was at 31% just two weeks ago. As gold rises it is not unusual for the commercial COT to start to fall. But the commercial COT never got to levels that would leave us comfortable. The silver commercial COT slipped to 30% from 31% and 33% two weeks ago. Neither are a big drop, but it is a concern. If gold and silver should turn back down from these levels, and that cannot be ruled out, there is considerable support for gold down to $1,240 to $1,260. Our expectations are that any pullback would see this zone hold.

SEE ALSO  Copper’s unpredictability could be to investors’ future benefit

Gold can remain weak through June and even into July before a stronger rally develops. However, it is noteworthy that last year gold rallied strongly in June before topping in July. So it can invert. Continued weakness now for gold could be quite positive later on. Gold stocks are quite cheap at these levels. But current weakness in the gold stocks could be pointing to further corrective action in gold before it regroups and rises again.

Not to ignore “The Donald” but it was another typical week of him dominating the headlines. This time the big story was Trump pulling the US out of the Paris climate accord prompting considerable opposition and criticism led by Germany but also including Republican congressional representatives and CEOs of large US corporations. German leader Angela Merkel was prompted to say that Europe’s days of relying on America are “over to a certain extent” and therefore Germany and its European allies “really must take our fate into our own hands.” Some 195 countries were signatories to the Paris climate accord. The US now joins Syria and Nicaragua as the only countries that didn’t sign on. Ironically, the US can’t really pull out of the accord until 2020 and it still has obligations. Some have noted that the US is turning its back on the West.

Stock markets shrugged their shoulders and moved to new highs. It seems the worse the news gets, the higher the stock market goes. Climbing that wall of worry?