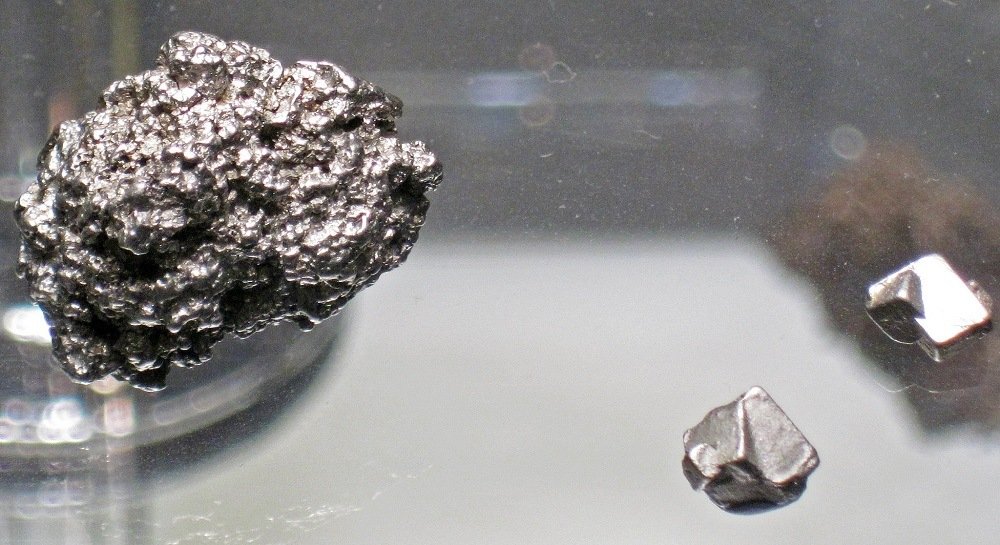 Berlin police say thieves broke into the German capital’s Bode Museum and made off with a massive 100-kilogram (221-pound) gold coin worth millions. Spokesman Stefen Petersen said thieves apparently entered through a through a window about 3:30 A.M. Monday, broke into a cabinet where the “Big Maple Leaf” coin was kept and escaped with it before police arrived. A ladder was found by nearby railway tracks. The three-centimeter (1.18-inch) thick coin, with a diameter of 53 centimeters (20.9 inches), has a face value of $1 million. By weight alone, however, it would be worth almost $4.5 million at market prices

Of the PGM’s which is used in cancer-fighting drugs, Platinum or Palladium?

Get ready for the investor stampede back into gold: Commerzbank/MarketWatch:

Commerzbank, meanwhile, offered another reason to suspect investors are about to revive their interest in gold: gold exchange-traded-funds recorded inflows for the second-day running on Wednesday, they noted, with inflows over the past two days combined totaling nearly 9 tons. They say that has reversed more than half of outflows previously seen this month. “Speculative financial investors, in particular, are likely to jump back onto the bandwagon: in the run-up to the Fed meeting their net long positions had dropped to their lowest level since the beginning of the year, putting them a good 80% lower than their last summer’s high,” wrote the analysts. “There is ample upside potential, in other words.”

Another positive and important catalyst for platinum is that more of the metal is expected to be consumed this year compared to how much producers are able to mine, meaning demand will outpace supply.

“Consumption will outpace supply by 120,000 ounces this year, the fifth straight year of deficit, according to a March 9 forecast by the World Platinum Investment Council, created by the six leading producers of the metal to stimulate investor demand,” according to Bloomberg. “Total platinum supply is forecast by the World Platinum organization to drop 4 percent to 7.66 million ounces in 2017 as South Africa, which accounts for 70 percent of world output, closes unprofitable operations and resources from its other mines get depleted.”

Copper has been buoyed by a strike at BHP Billiton’s Escondida mine in Chile, where after a 43-day stoppage workers decided to return to work on Thursday without signing a new deal. Top listed copper producer Freeport McMoRan’s giant Grasberg mine in Indonesia also announced this week copper concentrate production will be resumed following a strike at a domestic refinery in which the US company owns a minority stake after a 38-day hiatus.

Grasberg remains under a concentrate export ban as Freeport negotiates a new operating license and ownership agreements with the Asian nation. Phoenix-Arizona-based Freeport’s has been mining at Grasberg in the remote Papua province since the early 1970s and currently owns just over 90% of the iconic mine.

SEE ALSO  5 tech stocks you should keep your eyes on

I get a few questions about Rhodium and I thought I’d share this with you.

Rhodium’s main application is to clean vehicle emissions and the price quoted by Johnson Matthey, the world’s number one manufacturer of auto catalysts, on Monday breached $1,000 for the first time since June 2015. Due to rarity, the small size of the market and concentrated supply – South Africa alone produces roughly 80% of the world’s rhodium – prices are typically volatile.

But rhodium (and sister metal ruthenium) stands out when it comes to price swings – the metal touched $10,025 an ounce just before the 2008 financial crisis hit, but would drop 90% before the end of that tumultuous year. South African PGM producers extract a mix of metals comprising roughly 60% platinum, 30% palladium and 10% rhodium.

Robust car sales in China and the US, where gasoline vehicles dominate, coupled with rising emissions standards worldwide has been a boost for the metal. Rhodium and palladium finds application in gasoline vehicles while diesel-powered mostly use platinum for auto catalysts. Platinum at $970 an ounce has advanced 8% in 2017, while palladium is showing gains of 19%, climbing back above $800 an ounce recently.

Rhodium has also benefited from speculative demand. Deutsche Bank launched a rhodium exchange traded fund as far back as 2011 while South Africa’s Standard Bank listed its own physically-backed rhodium ETF at the end of 2015.

Why the French Election Will Decide Europe’s Future/ZeroHedge – Tyler Durden: When Europe’s leaders head for Rome this weekend, celebrating the 60th anniversary of the EU’s founding Treaty of Rome, they are facing latter-day Visigoths at the gates of the union. Populists are on the rise throughout the 28-member bloc, calling in question the very ideals the European Union was built on, and threatening the future of Europe as we know it. In that environment, Scottish independence initiatives and the Dutch elections were comforting news events.

Reuters reports that the Odoxa poll showed that 43 percent of voters were undecided over which candidate to fall behind, in a close-fought presidential race that has thrown up a string of surprises. The uncertainty reflects Macron’s lack of political experience, a Socialist party that is riven by splits and in disarray, Fillon’s woes amid a judicial investigation into his alleged misuse of public funds and a buoyant far-right. Voter surveys show independent centrist Macron and Le Pen neck-and-neck in the April 23 first round, and that they would go through to a run-off vote that Macron would win easily. Fillon lags in third and would be eliminated after the first vote. Adding to the unpredictability, though, the Odoxa poll showed that 60 percent of Le Pen’s potential voters and 57 percent of Fillon’s had definitely decided on their candidate.

This coming French election could kick off a rally in the gold of the likes we have not seen before. We have trade recommendations for our producers on the Tornado Bullion Platform designed for hedgers.

Another layer of the onion comes off/FT – Mehreen Khan:

Greece’s beleaguered banking system has taken a fresh hit from the country’s shaky bailout talks this year, registering its worst deposit outflows since the height of its debt crisis in the summer of 2015. Latest figures from the European Central Bank showed households and businesses pulled €1.1bn from the country’s lenders last month, moderating from the €1.7bn withdrawn at the start of the year but marking the worst two-monthly outflow since the country was bought to the brink of a Eurozone exit nearly two years ago.

Cash has begun leaking out of the banking system amid fresh delays in Athens’ bailout talks with its creditors in the EU and International Monetary Fund. Greece is still waiting on the approval of its second bailout review to unlock around €6bn in rescue cash the government needs to pay off its bills and avoid default this summer.

This little ditty has been floating about so here we go, the iPhone Crash? If you’re one of our geologists, operations person in a scrap yard or bullion dealer that uses the Tornado Bullion Platform to hedge with on your iPhone, you may want to keep our landline numbers close on this day.

Yesterday we reported that an international group of hackers claim they have breached Apple’s iCloud user database and stolen 300 million usernames and passwords. The group has threatened to initiate a widespread factory reset on April 7th, 2017, potentially wiping out data on tens of millions of iPhones and iCloud accounts should Apple fail to pay a ransom.

In 2006, 239 tons of platinum were sold. 130 of those tons were utilized in vehicle emissions devices, 49 tons were used for jewelry, 13.3 tons went into various electronics and 11.2 tons were used as catalysts in the chemistry sector. The remainder (35.5 tons) was used in anticancer drugs, spark plugs, turbine engines, oxygen sensors, electrodes and various minor applications. In 2017 with the recyclers consistently turning in higher and higher recovery numbers the bounty of platinum is now higher in the recapture column.

Featured Image by James St. John via Flickr CC BY 2.0