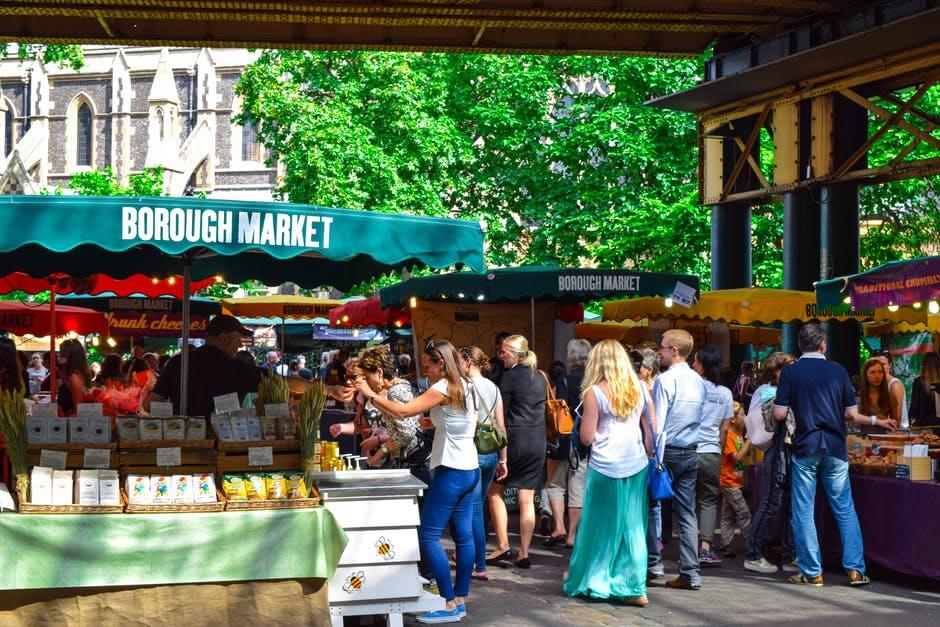 Those are the two keystones of my research and forecasting successes: cycles and demographics.

It can all be traced back to the day I was studying several charts that I’d laid out on my desk. I’d been looking at the Dow Jones Industrial Average adjusted for inflation when I glanced up and spotted the Baby Boomer’s birth wave.

I was confused for a second. They looked identical.

So, I laid the one page on top of the other, moved the demographic chart to the right by about 45 years, and they were a match! I immediately knew why, as I had already studied Baby Boom demographics for several years and knew that they peaked in spending between age 45 and 49. I later found that the more exact peak and correlation were 46 years.

Definitely a eureka moment. I nearly fell off my chair.

That discovery has since become known as my Spending Wave! It’s allowed me to make eerily accurate long-term forecasts (although, by itself, it’s not a perfect tool—there is no such thing).

It was what enabled me to see that Japan was heading for trouble in the late 1980s when the rest of the world thought they were going to overtake the U.S. It was the reason I knew we’d have a roaring 2000s when everyone else was preaching doom and gloom after the tech wreck.

And it’s what tells me that we’re headed toward trouble (and I’m not just talking about the looming market crash). The U.S. generational spending wave began to slow down after 2007, right on that 46-year lag. It continues this downward trend into around 2023 or so, with the worst coming by 2020.

But, here’s the thing

Stocks and the economy likely won’t exceed the highs we’re enjoying today—at least not adjusted for inflation. And there are several reasons for that.

Firstly, while the millennial generation is larger in numbers, it’s spread thinner over time than the Baby Boom generation is. This gives the latter more economic punch than the former. It’s like the difference between gentle rolling waves and a tsunami.

Secondly, we’re plateauing as a nation. After 2056 our population will likely decline slowly for a long time. And this projection is optimistic. What lies ahead for Germany and Japan is much worse! I’m talking catastrophic and fatal, respectively.

Here’s what our future looks like for the rest of this century—a 93-year forecast. How many economists do you know can even remotely do that? 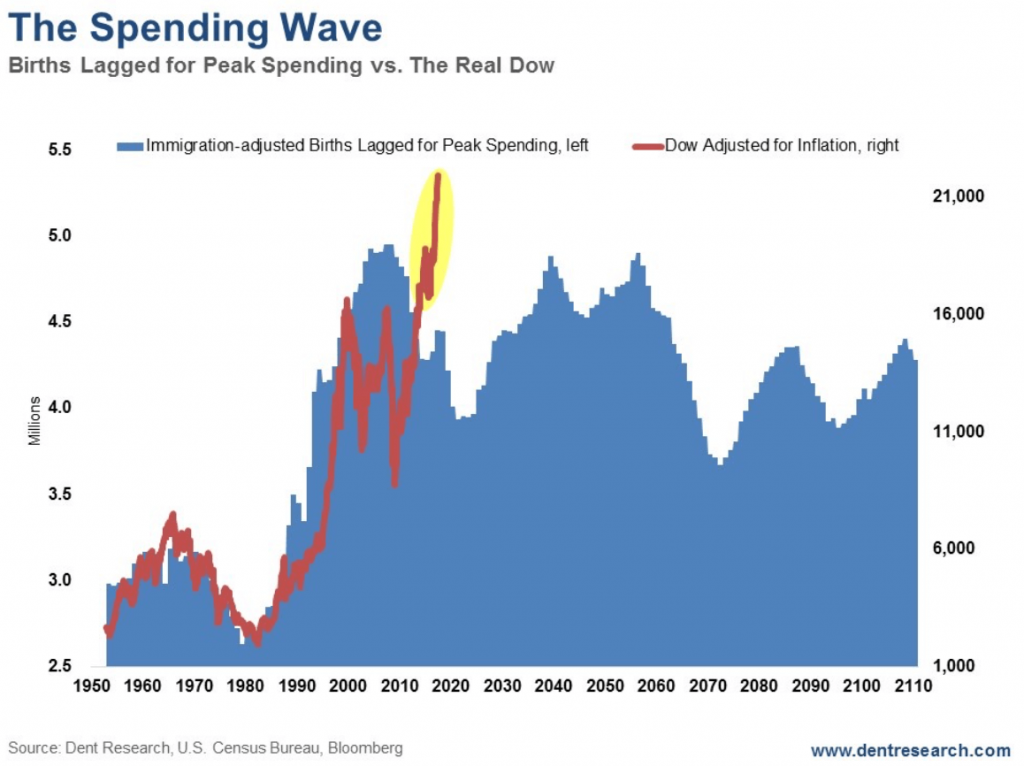 This chart already includes, on a 47- to 49-year lag, the next millennial generation into around 2065 (using historical and present births and immigration data). This new generation looks to peak in spending a few years later than the Baby Boomers, which peaked at 46 (the Bob Hope generation peaked at age 44).

The present Spending Wave lag for Generation X or the downward birth wave following the Baby Boom is 47.

Peak spending for the first wave of millennials is 48. For the second wave up, it’s 49, and it’s 50 for the longer wave down, which is projected to bottom in births into 2023 due to worsening economic conditions. That creates the next great depression into around 2073, and possibly a bit later.

We update this chart regularly to account for actual births and immigration and for the economic outlook for future trends in both!

Hence, we can project further out than 47 years-plus with reasonable accuracy.

I predicted many years ago that the birth rates would peak near 2007 when the economy was at its best thanks to Baby Boomer spending. People tend to have fewer kids when the economy looks bad or questionable, and vice versa. For example, births and immigration declined sharply into 1933 on a nine-month lag (for pregnancy) after the worst stock downturn in U.S. history.

This trend of slowing births began again in 2008 after the Great Recession began.

I also predicted that immigration would peak and decline after 2007, just like it did in the 1930s dismal economy. And it is! Immigration from Mexico in particular actually reversed for a while.

David Okenquist, my research analyst, and I have done detailed analyses of how births and immigration could decline in the greater downturn we’ll see ahead. I’m beginning to think we may be underestimating the impacts we’ll see in the next several years!

Government agencies tend to project demographic changes in a straight line, using the most optimistic assumptions rather than recognizing fundamental shifts in birth rates, immigration, or urbanization. There is no straight line. Only cycles—peaks and valleys.

Yet the government is forecasting 60 million more births and immigrants between now and 2060 that what we believe will actually arrive. That’s a huge difference! Our population growth will only be about 0.27% a year.

Given lower forecasts for births and immigration into the downturn into 2023 (and rising again after that), and the fact that increasingly urban and affluent households tend to have fewer children because of the expense involved in raising and educating them, we’ve extended the Spending Wave for the U.S. past 2065 into 2107!

After that, U.S. demographics decline into around 2073, especially after the late 2060s. That should be the next great depression, after India – what I believe will turn out to be the next China—peaks demographically and in its urbanization.

Prepare now for the impacts of the Spending Wave on your financial, investment, and business decisions. Then teach your kids and grandkids this stuff, so they’re not caught unaware later.