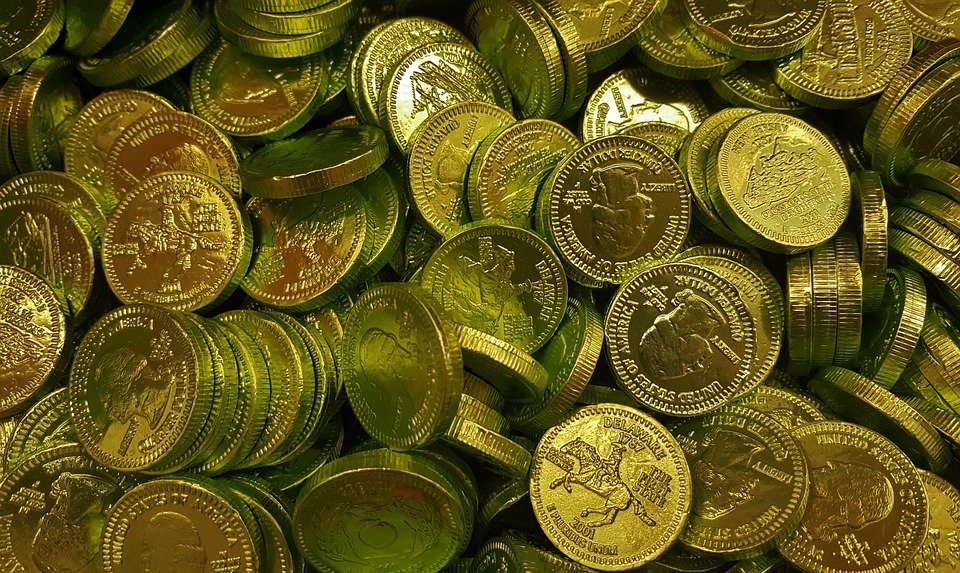 What would be the consequences of Trump’s economic policy for the gold, considering that both gold and silver recovered significantly in 2016?  Gold and silver are the second and third best-performing assets since the end of 2015, headed only by oil prices.

Most would probably agree that Donald Trump was the top story of 2016. He appears to be headed that way in 2017 as well. The chaotic, unpredictable press conference of January 11, 2017, was most likely the opening salvo of what promises to be a year of confusion and upheaval—along with more rhetoric accompanied by Trump’s flair for showmanship.

When someone dominates as Trump does, all other stories seem to get pushed to the sidelines. In the two months or so since what many felt was his unexpected election, norms of decorum, policy and international relations have been swept aside. Rather than temper his rhetoric he has instead continued his diatribes, much to the delight of the millions who voted for him. If there was any thought that he might, following what many believe was the most divisive election in US history, try to bring some healing those hopes have been dashed with gloating tweets, continued attacks on those who might “diss” him and ongoing attacks on opponents who don’t support him.

But it hasn’t stopped there. Trump has opened up fissures with China and with the US intelligence community. He continues his desire for closer ties with Russia, one of the few things that make sense although that has appeared to be at odds with some of his own nominees for cabinet. He attacks NATO as obsolete, is unconcerned if the EU breaks up, reiterates the desire for the “wall” along the Mexican border, supports torture, desires to eliminate Obamacare and disregards climate change. He also wants to deregulate particularly financial regulations that came about as a result of the 2008 financial crash. Trump has a famously short attention span, which raises questions as to whether he is capable of focusing on complex matters. He has declined daily intelligence briefings, but apparently has spent time looking at table settings for inauguration balls. He has left himself open to questions of ethics and conflicts of interest by setting his sons up to run his business empire without actually divesting himself.

He wants to “drain the swamp,” but promptly appointed a cabinet with a net worth of $14 billion many of them billionaires. His cabinet has been stacked with what can easily be described as Goldman Sachs executives, energy industry executives, entertainment industry executives and former generals. Trump is the richest President in US history with no other President even remotely close. He is considered an outsider, meaning outside the Washington Beltway, and is really the first one since Jimmy Carter and possibly Ronald Reagan; both Bill Clinton and Barrack Obama both may have started as outsiders but quickly became insiders. Trump is entering the White House with the lowest approval rating of any of his predecessors and far below Obama’s approval rating on leaving.

According to historian Niall Ferguson, there are five conditions that give rise to a populist leader such as Trump. A backlash against a sharp rise in immigration of cultures different then the dominate culture; a rise in inequality where today the top 8% own 85% of the global wealth; a perception of corruption at the top; a major financial crisis (2008); and, a demagogue to light the spark. Those conditions were not only seen in the US but in the EU as well. In Canada those conditions do exist but to a lesser extent. They have the potential to grow in Asia as well except Asia does not have the immigration issue.

SEE ALSO  Why Many Expect the BofC to Hike Rates

Today, markets are not as driven by economics and market fundamentals as they once were. They are driven instead by political events and in this case by one man, Donald Trump, whose words and targets are often unpredictable. When Trump attacked companies such as Boeing (BA-NYSE), Lockheed Martin (LMT-NYSE) and BMW (BAMXF-Pink Sheets), their stocks fell quickly, even as they recovered later. Biotech and Pharmaceutical stocks suffered when Trump declared they were “getting away with murder.” But others such as Financials, Defence and Metals and Mining benefited with thoughts of reduced financial regulation, while an increase in defense spending and infrastructure programs could benefit metals and mining companies.

But what if Trump’s comments caused the stock market to crash? Of course, Trump is not the only politician that could cause market gyrations. Observe the collapse of the British pound because of the “Brexit.” When British Prime Minister Theresa May spoke on January 17, 2017, about a hard “Brexit,” the British pound rebounded on expectations that the “Brexit” might go well. But President Trump also spoke about the “strong US Dollar” and that sparked a 100 basis points (bp) drop in the US$ Index and conversely a $15 jump in the price of gold. Both were a case of political comments sparking sharp moves in markets.

Bullish sentiment on the stock market is high currently over 70%, levels often associated with tops. The Case-Shiller PE Ratio is at 28.12, a level only seen for the third time over the past 100 years. The other two higher recordings were before the 1929 stock market crash and the 2000–2002 Internet/High Tech crash. At current levels, the Case-Shiller PE Ratio is higher than it was before the 1987 stock market crash and the 2008 financial crisis. Optimistic bullish sentiment and high valuations are two signs that should not be ignored.

Comments and actions from presidents and senior politicians can have market consequences. It is well known that President Donald Trump has been at odds with Janet Yellen, the Chair of the Federal Reserve Board. During the election campaign it was observed that Trump often seemed to be campaigning against Janet Yellen as much as he campaigned against Hillary Clinton. Trump has threatened to replace her. While her term is not up until February 2018 Trump could move to replace her sooner. That would bring a clash and could set off alarm bells in the markets,mainly because the President does not have the power to remove the Chair of the Fed until the end of the term. Trump and Congress are also facing the need to raise the debt limit in March 2017. In the past this has brought clashes between Congress and the White House. The current debt limit is at $18.1 trillion while the US debt is poised to pass $20 trillion, most likely before March 2017.

Potentially the most disruptive economic policy is Trump’s desire to shake down Canada, Mexico and China on trade. Trump has threatened a 35% border tax, a move that if instituted could cause considerable disruptions to the Canadian economy. The Mexican Peso has suffered considerably already falling roughly 16% since the election of Trump. In turn, social unrest is growing in Mexico due to inflationary pressures from a weakening Peso coupled with a sharp 20% hike in the price of petrol. Trump has also been challenging China’s one-China policy and his nominee for Secretary of State, Rex Tillerson has suggested that China should be ousted from the Spratly Islands and others that China currently occupies in the South China Sea. These comments have brought sharp retorts from China including the threat of war. Trade protectionism’s history shows that it ultimately leads to impoverishment and war.

SEE ALSO  After the economic boom: Should we be worried?

All of this could be beneficial for gold. Gold has been the best performing asset since 2000 with silver in second place. Following a four-year bear market, both gold and silver recovered significantly in 2016. Gold and silver are the second and third best-performing assets since the end of 2015, outpaced only by oil prices (see chart below). The presidential cycle shows that the first year of a presidential term is difficult for stock markets. Unlike stock markets, gold has enjoyed strong gains averaging 15% in the first year of the presidential term. Since gold started free trading back in the 1970s there was only one year, 1981, that did not see gold rise.

The first year of the presidential cycle is sometimes a year of change and uncertainty. Given President Trump’s volatility and unpredictability, this adds to the tension. There is political uncertainty on the geo-political front and on the domestic front given President Trump’s clashes with the US Security apparatus and the CIA. As well Trump is inheriting the huge debt built up in the Bush and Obama years.

While gold demand has softened in China, India and even for Central Banks in the past year the reality is that gold is once again being viewed as a safe haven. Mining output is estimated to top out possibly by 2020. This means that more gold needs to be found. But the amount of gold being found by gold mining exploration companies has plunged an estimated 85% over the past decade according to a study by Bloomberg. It is no surprise then that gold companies topped mining deals by value in 2016 with an estimated $16.1 billion in deals. Finally, gold miner’s reserves may have peaked and have been starting a decline.

All of these have the potential to push gold prices higher in the following years and in particular, it could push gold mining companies to share prices sharply higher, especially for junior exploration gold mining companies. Political comments may cause gyrations in markets, but investors might be wise to counter that by holding a bit of gold. 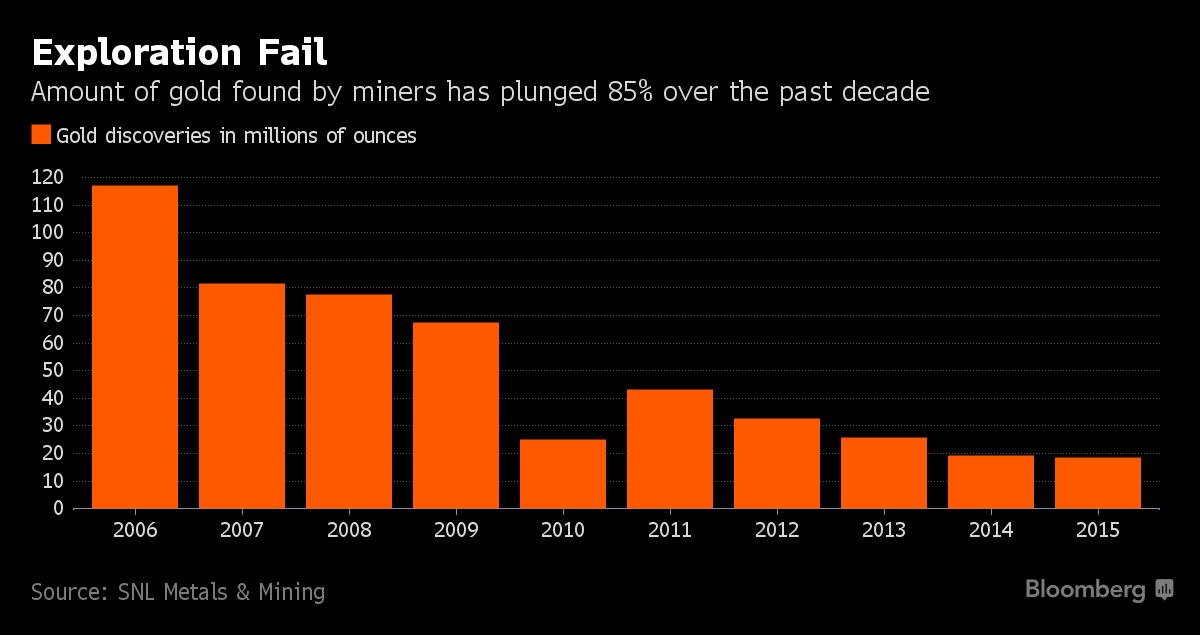