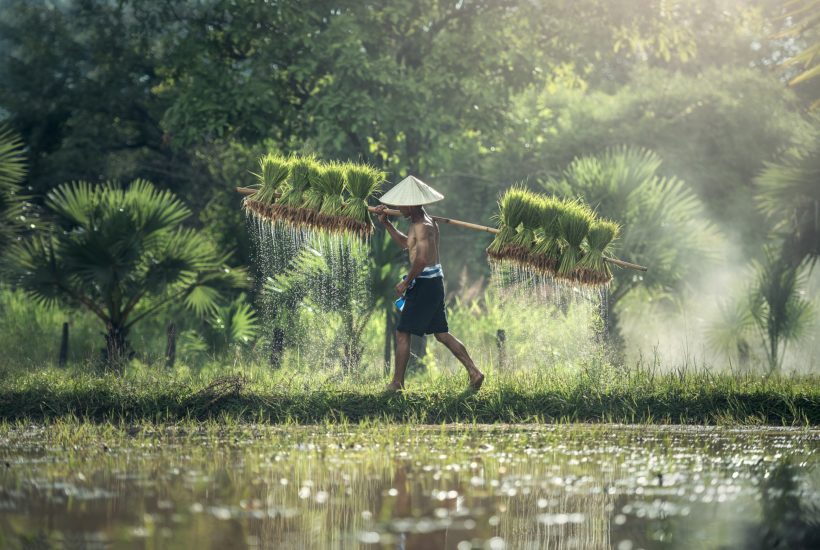 Wheat markets were mixed, with Hard Red Winter futures a little lower and Soft Red Winter and Spring markets a little higher. Improving weather around the world and here at home was the big reason to see some selling hit the markets, but reports that Russia and Europe are turning dry supported the markets. Europe got some rains after a prolonged dry spell and Russia also got a little rain in northern and central areas. The rains in Russia are leaving southern areas dry, but these areas are seeing some isolated to scattered showers now. European areas are drying out again after the rains of a few weeks ago. The US Midwest has also seen a lot of rain and a bumper SRW crop is expected. Reduced production ideas are floated for HRW areas. It has been hot and dry in central and southern areas after a freeze a few weeks ago. The crop suffered Winterkill first and now is suffering under the hot and dry weather. Growing conditions are better now with the arrival of showers in these areas. It has been mostly dry but cold in the northern Great Plains and into the Canadian Prairies but the market is less concerned about production potential for Spring Wheat crops.  It was warmer last week.

Corn was a little lower in quiet trading last week. It is possible that futures have seen at least a short term low. The main fundamental remains demand destruction caused by the lack of ethanol demand and the lack of feed demand. Both have been detrimentally affected by the Coronavirus.  The virus has caused states to impose stay at home orders on its people, meaning no one is driving and consuming gas. Some states are starting to open now in the US but the experience in other countries suggests that the people will be very cautious in any activities and really not go out and spend money or hit the stores as before. Driving will be significantly less. Feed demand has been reduced as packers have been forced to shut plants down due to infected employees in the plants. The plants are opening now with some government-mandated protections for workers, but not all workers are back to work and the social distancing requirements mean that less meat can be processed in any case. Cattle and hog producers are seeing much less demand for their production and that has affected feed demand. The Midwest weather is improving after the recent cold spell. It is now warmer with some showers and storms around.

Soybeans and products closed a little lower with many traders uncertain of the next price direction for these markets. Soybeans and the products fear less demand from China due to recent sabre rattling from the US about how China handled the Coronavirus outbreak and more recently due to Chinese moves to impose its will on Hong Kong. Chinese moves to better control Hong Kong are not going well with western nations who want Hong Kong to hold onto its more independent status. The demand has been slow otherwise with the significant competition from Brazil. The Real has weakened a lot against the US Dollar and Brazil producers can sell at very high prices in the local currency. Weather is improving with warmer temperatures.  Some Soybeans might need to be replanted this week. Brazil production is almost sold out now. Production estimates there are slightly less than before due to hot and dry weather in some areas.

Rice was a little higher on the weekly charts but showed very little interest in going up or down in a big way. The domestic situation remains tight for the old crop month of July. New crop months have reflected ideas of greatly increased planted area from producers. Some producers are selling the next crop and some hedge selling has been seen in new crop months in futures but this has dried up as Arkansas has been cool and wet for planting. Mississippi has also had problems planting the crop due to too much rain but the crop in both states is being planted. Demand for US Rice remains generally positive and the export sales pace in general has been very good. The ales were great last week at well over 100,000 tons. The weekly crop progress reports showed that southern Rice is emerging well. Some Rice in Texas and Louisiana is in flood.

World vegetable oils markets were mixed last week. Palm Oil closed higher after news of renewed demand interest from India and China.  Palm Oil has been hoping for better demand from importers as world economies slowly open after being closed by the Coronavirus epidemic. A government change in Malaysia helped open the Indian market to Malaysian imports again. Soybean Oil was higher last week and Canola was lower. Palm Oil and Soybean Oil were hurt by the lack of bio fuels demand, but the demand loss appears to be part of the market price now. The same factors affecting ethanol demand are affecting demand for other bio fuels. People are driving less due to the Coronavirus and even reduced Crude Oil production has not been enough to lift prices to profitable levels for bio fuels producers. Canola fell on improved growing conditions in the Canadian Prairies.  Canola has found support from the recent recovery in Soybeans and Soybean Oil along with a weaker Canadian Dollar. Canola is more of a food oil than the others, although it also has bio fuels uses. China has recently allowed Canadian Canola imports to resume, so demand could soon improve. The weather has been warmer this past week after weeks of cold and wet weather.

Cotton was a little lower last week after failing to hold above the previous week’s highs. Support is coming from improved demand for US Cotton, but this demand has started to fade. Export sales were nothing more than average last week. There is concern that China will stop fulfilling its obligations in the Phase One trade deal due to ramped-up US rhetoric on the Chinese response to the Coronavirus epidemic and now the unrest in Hong Kong. The world is starting to slowly recover from the Coronavirus scare and some stores are starting to open again after being closed for weeks. The hope that consumer demand for Cotton products will quickly return is not likely to be confirmed. Consumers have really been hurt economically due to stay at home orders imposed here and overseas and it will take some time for them to recover. As an example, Chinese stores have been open for several weeks but there has been no consumer rush to go to them and buy. The same is possible here and in Europe although the data so far is mixed in this regard. It is too dry in Brazil for the good growth of the second crop of Cotton.

FCOJ was higher for the week after making new highs for the move. Trends are still up in the market. Support is coming from the continued effects from the Coronavirus that are keeping people at home and drinking Orange Juice in any form. Demand from grocery stores has remained strong in response to the increased consumer demand. Oranges production was estimated as less in the latest USDA reports at below 70 million boxes, so supplies available to the market are somewhat reduced. Inventories in cold storage remain solid so there will be FCOJ to meet the demand. There is increasing concern about the food service demand not improving even with the partial opening of the states. The weather in Florida has become much better for the crops. Southern areas are cooler now and have seen a few showers. The midseason Oranges harvest is diminishing. Color break is reported on late variety Oranges. More signs of early bloom and new growth on trees are reported. Favorable weather is reported in Brazil but it has been dry and irrigation has been used.

Futures were lower in New York and higher in London. New York was lower on depressed consumer and roaster demand in the US and Europe. The demand from coffee shops and other food service operations has dropped to almost nothing. Consumers are still drinking Coffee at home, but many smaller roasters are actively trying to unload green coffee already bought a there are only a few outlets for sales at this time. This might change a bit in the next few weeks as the US and EU economies slowly open up. The logistics of moving Coffee from Central and South America remain difficult. Producers have had trouble getting workers to pick the cherries and mills and processors have had trouble getting workers to staff the plants. Shipping logistics have improved somewhat, but many are still having trouble getting the Coffee to ports to move to consumer nations. Vietnamese producers are not selling due to the weaker prices paid currently and the effects of the Coronavirus.  Indonesian producers are more active sellers.

New York and London closed higher with London once again leading the way. Crude Oil and products prices were higher on the week in recovery trading. The recently weaker petroleum futures had made higher priced ethanol that much more expensive to blend and cuts demand. Prices in petroleum futures remained generally firm last week but still have a long way to go before Ethanol processing becomes profitable again. That makes more Sugarcane available for processing into Sugar in Brazil. The Brazil mills are trying to cover the lack of White Sugar in the market. Reports indicate that little is on offer from India in part due to logistical and harvest problems caused by the Coronavirus. Thailand might also have less this year due to reduced planted area and erratic rains during the monsoon season. There are reduced flows from rivers from China as well.

New York and London closed lower after a week of wide ranges. The virus has complicated farming and marketing efforts. Ideas are that deliveries can be slower on any contracted Cocoa and that the next crop could suffer as workers stay away. Analysts interview by Bloomberg News estimated the grind in Europe and North America moderately lower. The Coronavirus helps keep demand away and helps keep workers from grinding facilities and chocolate manufacturers. Harvest is now over for the main crop in West Africa and the results so far are very good.  Ideas are that demand is less than before due to the Coronavirus problems in Europe. The reports from West Africa imply that a big harvest in the region.