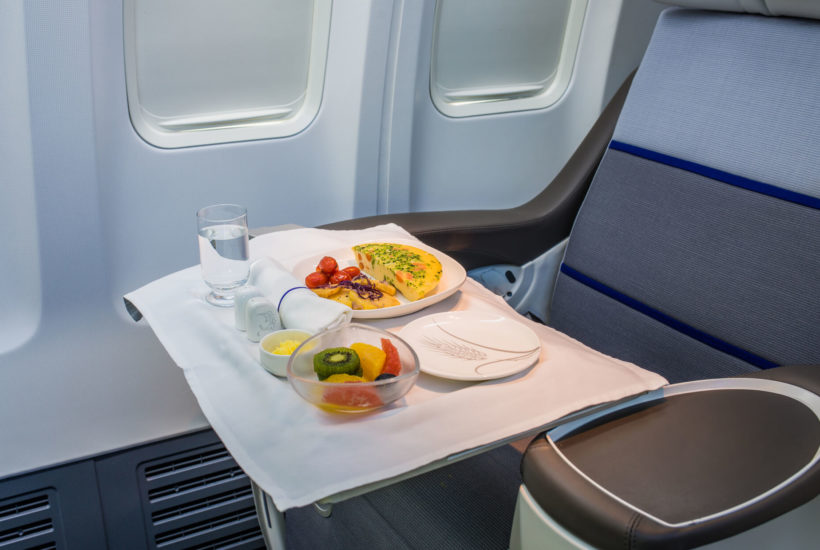 First class isn’t what it used to be, at least according to frequent airline passengers like Bonnie Friedman. She’s been flying in the front of the plane for years and has witnessed the slow and sad decline of premium service.

“It was never fabulous,” says Friedman, a communication consultant who lives on Maui. “But in the last three or four years, it has most definitely lost what little luster it had. The planes are cheaply made, the seats are smaller, the bathrooms almost too small to get into — and I’m a small person.”

Friedman, like a lot of other air travelers, has noticed a marked decline in premium service. Seats have shrunk. Leg rests vanished. The food is barely edible, and the service is unacceptable.

And let’s be clear about what we mean by first class: We’re talking about domestic flights and generally excluding the competitive transcontinental flights, where airlines still make a half-hearted attempt to put the “first” into first class.

If you’re thinking, “What do I care if first class is in a tailspin? I only fly in economy class,” then think again.

First-class is the best an airline can do, and economy class is arguably the worst. But the two move in tandem, so as first-class falls off a cliff, the good people in the back of the plane suffer, too, as airlines reduce seat size and slash service. We’re all in this together.

The decline of first-class raises two important questions: First, why the cuts? And second, what can you do about it?

Why first class isn’t what it used to be

George Hoffer, a transportation economics expert, has tracked the fall of first class. Part of the reason, he says, is that the equipment has changed.

“The wide-body jets have been replaced by less spacious, single-aisle aircraft,” he notes. “Essentially the same crowded cabin feel is shared by all classes.”

The smaller planes are more fuel-efficient and make more sense from an operational point of view. But the folks upfront sure do miss that extra space, he adds.

Hoffer says the first-class experience has also been cheapened by the upgrade game of mile-collecting frequent fliers. It’s simple economics: When your first class seat is “free,” you get what you pay for.

“It diminishes the conspicuous consumption component of the total value obtained from first-class seating,” he says.

How far first class has fallen

You don’t have to look far for examples of the fall of first class.

John Moore, a career counselor from Chicago, says he can barely recognize first class anymore. “It actually used to be an amazing experience,” he says. “But it’s gone down the tubes.”

In-flight meals have all but disappeared, replaced with snacks — or nothing.

Of course, most airlines don’t even bother calling it first class anymore. It’s now  “business” class, as if renaming it can somehow lower our collective expectations. Nice try, airlines.

Gail Cunard, a retired CEO from Savannah, Georgia, says first class today is “appalling.” On her latest flight to California, her first-class ticket didn’t even get her into the first-class lounge. There was no priority seating for her, no in-flight snack.

“The menu was nothing to rave about,” she adds. “And the meals were served on plastic plates.”

What to do about losing first class

It’s no coincidence that the fall of first class coincides with products such as “basic” economy, better known as last class. Airlines are trying to cut their way to higher profits, and they expect us to be grateful for it. Funny, but we aren’t.

In a perfect world, the class system wouldn’t exist. Every seat would come with a humane amount of space, reasonable service, and basic amenities such as the ability to check a bag and make a seat reservation. But we don’t live in a perfect world.

The solution is simple: Whenever possible, fly on airlines that treat all of their customers well. A one-class airline like Southwest, where all passengers have adequate leg space, stands out. The old JetBlue, before it foolishly embraced the class system, comes to mind, too. Even a carrier like Alaska Airlines, which has a premium class, is worth recommending.

The decline of first class is worrisome for all airline passengers. Because, as the front of the cabin goes, so goes the back. If premium service is the best an airline can do, I can only imagine what its worst is. Maybe we’re about to find out.

But there are still perks: These US airlines provide amenity kits to help flyers relax

Where to still find first class

Transatlantic and transpacific routes. Even domestic airlines go the extra mile on the long-haul routes — mostly because there’s competition from carriers that still understand a luxury experience, such as Emirates and Singapore.

Private jet. If you want a true first-class experience, you might be better off chartering your own aircraft or buying a plane. If you can afford it.