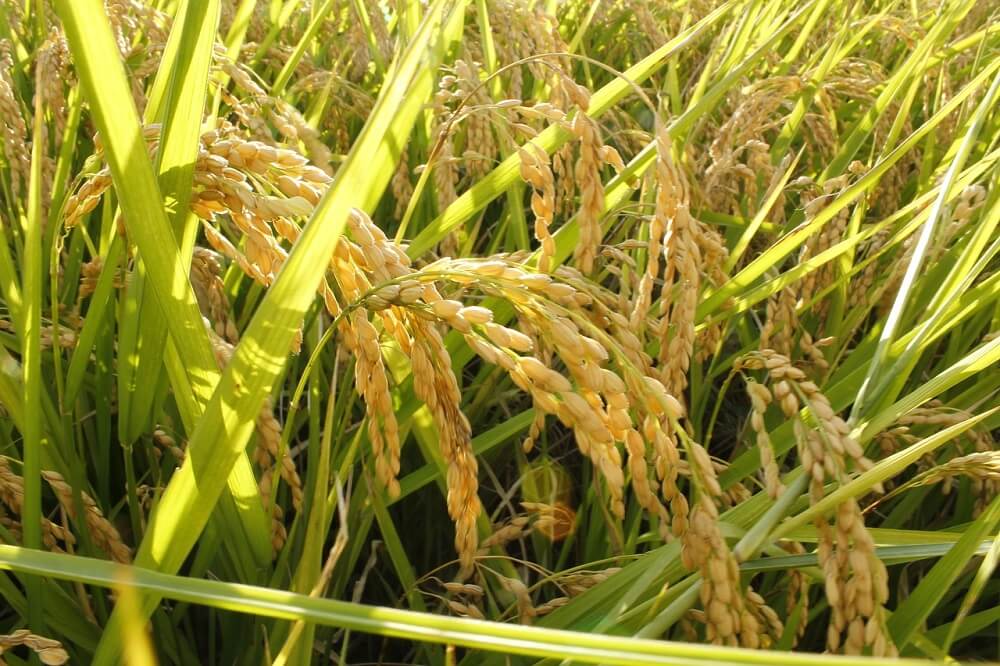 Weekly news in the agriculture market: World rice production was increased to 483.66 million tons and world ending stocks for the coming year were increased to 122.52 million tons, from 120.55 million last month, as USDA noted better-growing conditions in India than last year.

US markets were generally lower in reaction to harvest pressure and the USDA reports that were released on Wednesday. Minneapolis spring wheat markets continued firm as the extreme weather in the US northern Great Plains and the Canadian Prairies continues. USDA estimated the US All wheat production at 1.760 billion bushels, down from 1.824 billion last month, but above trade expectations at about 1.746 billion bushels. The higher production and worries about feed demand pushed USDA to estimated the US ending stocks at 1.184 billion bushels for the year just ending and 938 million bushels for the new crop marketing year. World ending stocks were estimated at 258.1 million tons and 260.6 million tons.

The Kansas crop harvest is still very active but is starting to wind down. Yield reports were mixed, but protein levels were considered generally satisfactory. Minneapolis remains well supported by bad growing conditions in Spring Wheat areas of the northern Great Plains and the Canadian Prairies. Provincial reports from Canada suggest that losses are possible from dry weather in western areas and too much rain to the east. It is dry and very hot in the Dakotas and Montana and the southern Prairies, while other parts of the northern Prairies have seen too much rain.

Crops in some western areas are showing signs of stress as many areas have not had rain in quite a while and as topsoil moisture is starting to run short. There are reports that parts of central Illinois are too dry, although stress has not been reported yet. Eastern production areas show the effects of heavy rains in many areas, particularly on later planted crops. Crop progress remains generally good but is uneven due to the spread out planting seen at the start of the year. Pollination is seen on some fields, but other areas might not move to pollination until the end of the month.

Soybeans and soybean meal were lower last week on variable weather forecasts and in response to the USDA monthly supply and demand estimates. USDA did increase old crop export demand and cut ending stocks for the current year to 410 million bushels. Ending stocks for the coming year were estimated at 460 million bushels as USDA made changes to reflect the reports from June 30. It now forecasts US new crop production at 4.260 billion bushels on yields of 48.0 bushels per acre.

Eastern areas are forecast to see wetter and somewhat cooler weather this week, and this should be harmful to yields. Producers in the eastern Corn Belt are already reporting bad crops, and some are even considering abandoning the crop and claiming insurance. It has just been too wet for Soybeans to grow well. Soybeans in many areas remain short and some crops are not canopied yet. Crop ratings are not as high as expected but could show some deterioration in the data that will be released on Monday afternoon. Demand for US Soybeans remains strong, with solid export sales on a weekly basis that run above trade and USDA expectations.

Rice closed lower last week as weather for growing showed some improvement and in response to the USDA reports. USDA did cut planted and harvested area in line with the indications from the reports on June 30, and also cut yield potential and the ratio of planted to harvested area due to the poor growing year was seen in many places that could increase abandonment and hurt yields. It also cut demand potential on the domestic side, which remains a problem for analysts as demand in the US market tends to be stable. Export demand was cut as well, leading USDA to keep ending stocks estimates relatively high at 32.6 million hundredweight, from 34.1 million last month and 46.1 million last year.

World production was increased to 483.66 million tons and world ending stocks for the coming year were increased to 122.52 million tons, from 120.55 million last month, as USDA noted better-growing conditions in India than last year. Growing conditions are improved there as the monsoon has been better, but coverage of rains has been spotty until now and there are still chances for weaker production than expected in India this year. The US production ideas are still thought to be too high by many in the trade. There are ideas that USDA has overestimated planted area in Arkansas.

The weekly charts show that futures are holding some very important support areas, so the price action in this market needs to be monitored carefully for a potential change in trend. EPA announced its proposed annual biofuels mandates, and the mandate for soybean oil based bio fuels was reduced due to what it called domestic market reality. Canola remains relatively strong amid tight Canadian market conditions and adverse growing conditions.

Cotton was lower and made new lows for the move on the weekly charts. World data showed higher month to month ending stocks projections due to increased production potential in Asia, and mostly in India and Pakistan due to improved monsoon rains. However, the monsoon has been uneven, with some areas getting very good rains, but other areas showing stress due to a lack of rain over the last couple of weeks.

Warmer temperatures have arrived and there has been enough rain. Texas and the desert Southwest and into California has seen extreme heat and mostly dry weather and dryland crops are suffering. Irrigated crops should be in relatively good condition. Warmer and drier weather is expected to continue this week in most of these production areas, and growing conditions could continue to deteriorate in the west. The US and maybe the world will produce much bigger crops this year, with US crops bigger due as much to increased planted area as yield potential.

FCOJ closed lower last week, and trends are turning down on both the daily and weekly charts. Florida weather has shown improvement as rains continue in the state. There are no systems in the Atlantic to cause concern about tropical storm development that could be detrimental to trees and fruit. Domestic production remains very low due to the greening disease and drought. USDA estimated the past crop production at 68.7 million boxes, which is stable from June. Trees now are showing fruit of varying sizes and overall conditions are called good because of the irrigation and the recent rains. Brazil crops remain in mostly good condition.

It was a higher week in New York as that market apparently completed what could be an important low. New York futures are breaking down trends that have been in place on the daily charts since last November. London had been stronger as news surfaced that supplies in the cash market are tight due to reduced Vietnamese selling and tight supplies in the country. Offers are less and seen at high prices from Robusta countries such as Vietnam. Indonesia and Brazil are also very low on supplies. The Robusta market is still relatively strong compared to Arabica and due to the short supplies available to the market as it works to curb demand through the higher prices.

Production conditions have been better this year in Brazil, and a better harvest is anticipated in the next couple of months as the Sugarcane harvest moves to its peak. UNICA showed a big increase in processing of cane in its latest reports, but cane processing remains below a year ago. It said that 47/6 million tons of Sugarcane were processed in the second half of June, down 1.4% from the previous period.

Production in India and Thailand is expected to improve in the coming year as both countries anticipate better monsoons than the failed monsoons of last year. However, some northern and western areas have been missed lately and crops in these areas could be stressed. India is now ready to increase import tariffs due to the outlook for increased local production.

Futures markets were a little higher last week in consolidation trading. The overall market situation remains generally bearish, although fundamentals could change in the longer term. The demand from Europe is reported weak overall, and the North American demand has been weaker.

However, chocolate prices are falling in Germany and should be falling in other parts of the world now to help move product and to get the market flowing again as input costs are much lower now. Callebrut reported very strong earnings last week due to the weaker cocoa prices and still high chocolate prices that created strong processing margins.

Dairy markets were higher last week, and longer term trends remain up. Butter prices have been the strength of the market on reports of very good demand and adequate supplies. However, there are some shortages of cream in a few locations. Cream demand for Butter has been very good. Demand for Ice Cream has been mixed depending on the region.

US cattle and beef prices were lower and trends in cattle futures remain down. The beef market remains weaker in the last couple of weeks, but cattle prices have held relatively firm. Feedlots are very current with supplies and are concerned about extreme heat in feedlots that could hurt weight gain. However, ideas are that more supplies are coming as weight per carcass is stable and more cattle is coming to the market.

Pork markets and Lean Hogs futures were weaker as the market anticipates a trend change due to a seasonal trend to lower demand. Demand has been lower for the last couple of weeks and this has affected pricing. Demand starts to work lower as most of the Summer buying is done.