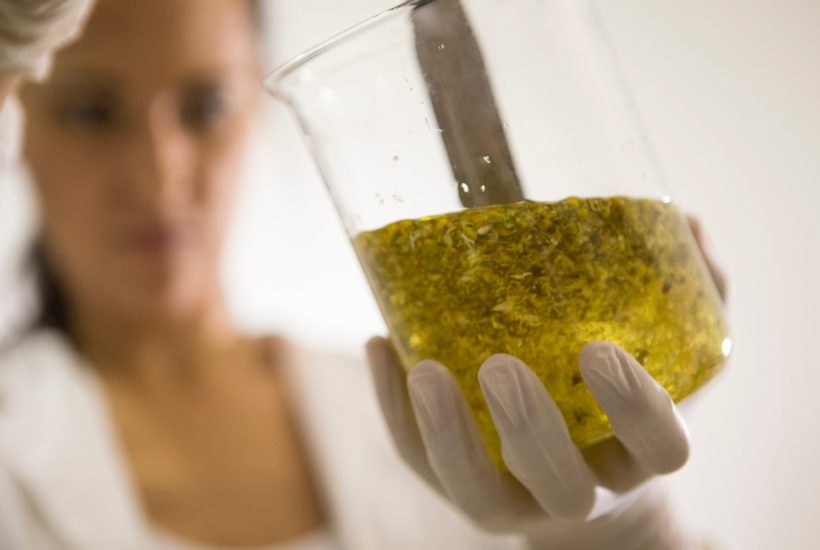 The spin-off of UMH, AntalGenics, a biotechnology company that focuses on the development of innovative molecules for cosmetic applications, launches its first neuro cosmetic product for sensitive skin after two years of development. “Calmapsin” is the trade name of this new ingredient based on a natural compound designed for sensitive skin that has been developed by the Elche team.

The launch of this ingredient and its presentation to the public will take place at the “in-cosmetics Global,” the world’s leading fair dedicated to ingredients for personal care. This year, the event will be held in Barcelona from March 31st to April 2nd, and there will be an AntalGenics stand offering its first commercial product to the public.

Find out the most important finance headlines and latest news from the biotech sector with the Born2Invest mobile application.

An expert in neuro cosmetics

Before its commercial name, this ingredient was known as AG1549 and was developed entirely at the headquarters of the company, in the Science Park of the UMH. The company is an expert in neuro cosmetics and provides tailor-made research and development services, as well as its own ingredients based on scientific innovation.

However, in addition to the cosmetic line and the R+D service – through which they work for three large companies, both nationally and internationally – the company at the UMH Science Park also carries out research in the pharmaceutical field. This is how the head of Marketing and Business Development at AntalGenics, María José López, explained it: “In fact, we are currently finalizing what will be the first pharmaceutical ingredient of our own, which we hope to have ready and be able to market by the end of 2020,” she talked about an ingredient that would be related to the treatment of psoriasis.

At the moment, the commercial product developed by AntalGenics that is ready for marketing, is a neuro cosmetic ingredient aimed at daily care for sensitive skin. It has an effect on sensory neurons and skin cells. The result it achieves is to improve the function of the skin barrier, soften, protect against oxidative stress, and reduce the itching sensation, according to Lopez.

SEE ALSO  Benefits of insurtech to the consumer

The team working in this innovative SME is specialized and multidisciplinary. It works in two different spaces in the Quorum III building of the UMH and is made up of nine people. “We are eight women and one man, contrary to what we are used to, most of us at AntalGenics are women,” said López. In addition, the company is driven by Asia Fernandez, Gregorio Fernandez, and Antonio Ferrer, president of the company. All of them are researchers from the Institute for Research, Development and Innovation in Healthcare Biotechnology of Elche (IDiBE) at the UMH.

The firm was born in 2015 and, in addition to the work in R+D for other firms, it is now finalizing its own developments, which take longer to come to market. “The development of a cosmetic ingredient takes from one to three years, and pharmaceutical development takes longer, from five to ten years,” according to the head of Business Development for the firm from Elche. Right now the first new products are beginning to materialize.

In addition, AntalGenics has just received an award for its work. Specifically, the Health Sector Award for the design and development of the innovative neuro cosmetic to soothe sensitive skin. The National Association of Centers Promoting Excellence, CEX, recently recognized a total of eight Spanish organizations in the national phase of the Quality Innovation Award, QIA.

This is a competition created in 2007 by Excellence Finland to promote innovative projects of companies and organizations, share experiences and give local and international recognition to the best, with the ultimate goal of increasing the competitiveness of companies and participating countries. In December 2019, the award ceremony was held in Madrid in its national edition.

After the success in the national edition, AntalGenics goes to the international round with the idea of demonstrating the research and, above all, the work and dedication of its team. They will be in Tel Aviv, Israel, on February 5th and 6th, 2020, at the ceremony.

The firm’s work had already been recognized by other public entities such as the Valencian Institute of Business Competitiveness (IVACE) or the Center for the Development of Industrial Technology (CDTI), which through their aid programs, granted the company about $1,1 million (€1 million) in funding.

In the short term, according to María José López, this year, they want to finish the new pharmaceutical ingredients they have been working on for years and close another cosmetic compound for the scalp. In the long term, they want to become an authoritative entity, and create many more compounds, because as the AntalGenics representative said: “the world of cosmetics changes a lot and you have to keep innovating, otherwise you are left behind.”

First published in valenciaplaza, a third-party contributor translated and adapted the article from the original. In case of discrepancy, the original will prevail.