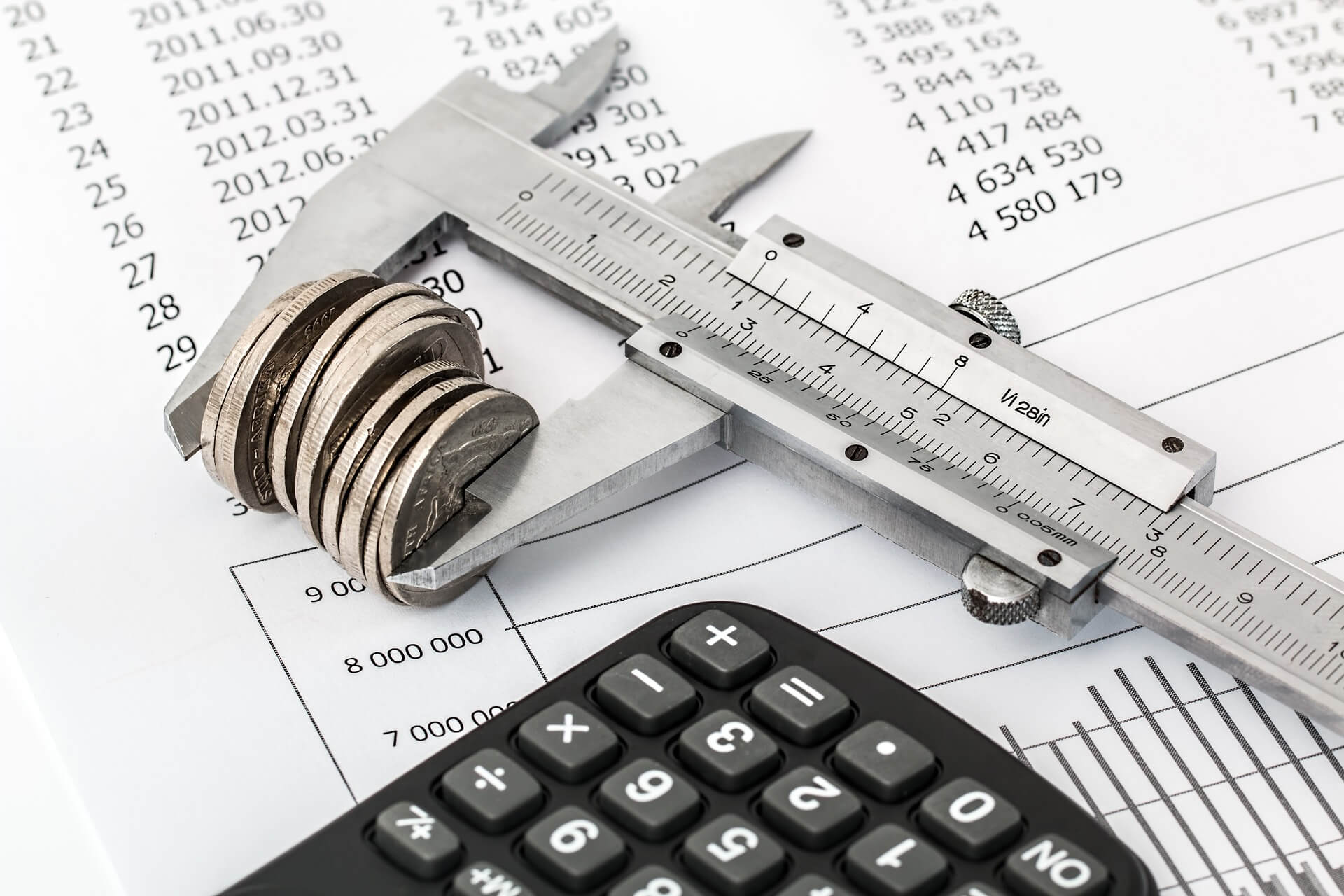 If you’ve read any of my work, you know I think the iceberg that will ultimately sink the global Titanic is China. It has the greatest overbuilding and debt bubble in history, not to mention the obvious real estate and stock market bubbles.

But the Chinese government has too much control over its economy to just let it slide. No. China won’t be the first domino to fall. Rather, the dubious honor may go to lovely and charming Italy.

Italians are fun, laid-back people. I love visiting the country.

But would I bet on it?

Italians think they’ve died and gone to heaven, but it looks more like hell’s sneaking up on them!

Outside of Greece, Italy has the highest government debt: 130% of GDP and rising. Greece’s government debt is at 180%, but at least Greece keeps getting bailouts, which it can get because it’s small enough to have little impact on the euro.

But what if Italy starts defaulting?

Scratch that. What happens when Italy starts defaulting?

The country has the great majority of the bad loans in the Eurozone. Look at this chart. 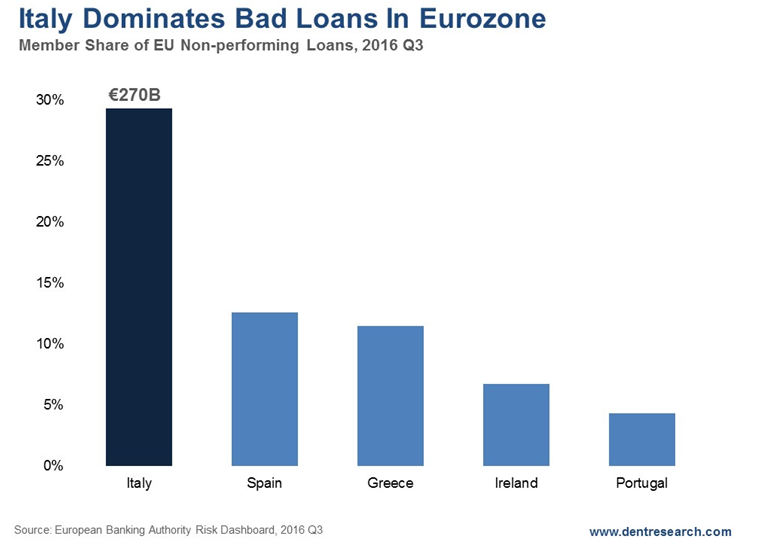 Of the worst countries in the Eurozone, Italy dominates bad loans in the banking and private sector. It has 29% of the total or $324 billion in bad loans—and that number continues to rise.

Major bank stocks there have already plummeted the most in recent years and are on government life support.

What makes Italy so dangerous is that French banks have the most outside exposure to these bad loans, with Germany taking the second spot.

But ultimately, Germany has the greatest exposure to a fall in Italy. It is the strongest exporter in Europe, especially to the highly indebted southern European nations.

SEE ALSO  Commerzbank is investing in the FX-Fintech 21 Strategies

The euro made that imbalance both possible and attractive. Strong exporters in northern Europe had more favorable exchange rates under the common euro, and the weaker importing nations could borrow more cheaply than under separate currencies.

Since Germany’s exports are 46% of GDP, it has a strong incentive to keep floating these southern importers while criticizing them and forcing austerity at the higher political levels. It’s called Target 2 loans. The German central bank (and others) simply defers payments from companies in Italy to some flexible future date.

It’s like a company that gives more credit to their customers just to keep them buying—even though eventually, those patrons will be able to repay a penny.

Look at this next chart. 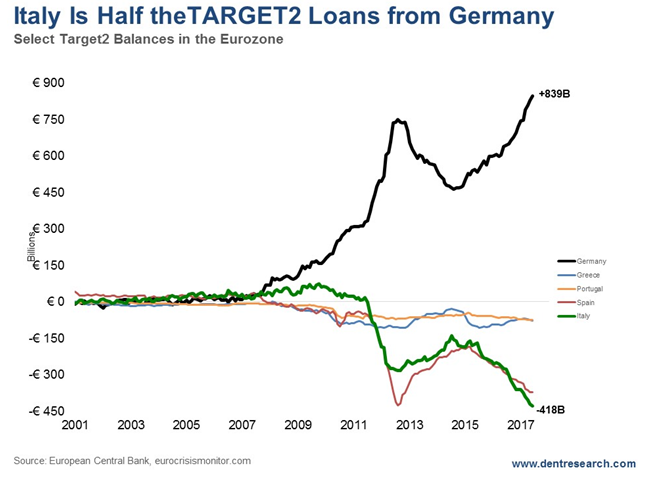 Given the potential to default on these loans and on foreign bank loans, Italy is strongly incentivized to leave the euro and default, just like Iceland did when it faced an equally dire situation.

A default, a much weaker local currency and higher inflation (from rising import costs) would mean that Italy’s sovereign bonds would see a massive spike in rates. During the euro crisis, they went from 3% to 7%. This time, it would be much worse!

But here’s the most important point. Sovereign bonds around the world are overvalued with often negative yields long-term (when adjusted for inflation).

Yet continued strong ECB bond buying and QE has put the Italian 10-year bonds yield at 1.85% versus U.S. Treasuries at 2.2%.

Italy is bankrupt, and we are the best house in this bad global neighborhood. Yet Italy’s bonds are stronger than ours and yielding less.

How much worse could risk be miscalculated?

When Italy gets in trouble again and bond yields spike, that will cause bondholders to question all sovereign bonds, even the trusted U.S. ones.

The bond bubble will seem to have topped and burst—but NOT.

Bond yields could spike up across the world creating a global crisis and stock crash, and then, after a while, deflation will set in from the collapse of bubbles and debt deleveraging. Deflation will then cause the best sovereign (and corporate) bonds to fall in yields to even lower levels than today’s unprecedented lows.

The bond bubble will continue next time for fundamental reasons, not artificial.

We’re on a financial assets roller coaster ride and the exciting (treacherous?) section is just ahead. And it’s going to be even hairier in traditionally safer and more stable bets like U.S. Treasury bonds.

Wall Street has a new consensus view that such yields can’t go much lower and will rise modestly for years ahead, with mild rising inflation—a typical soft-landing view.