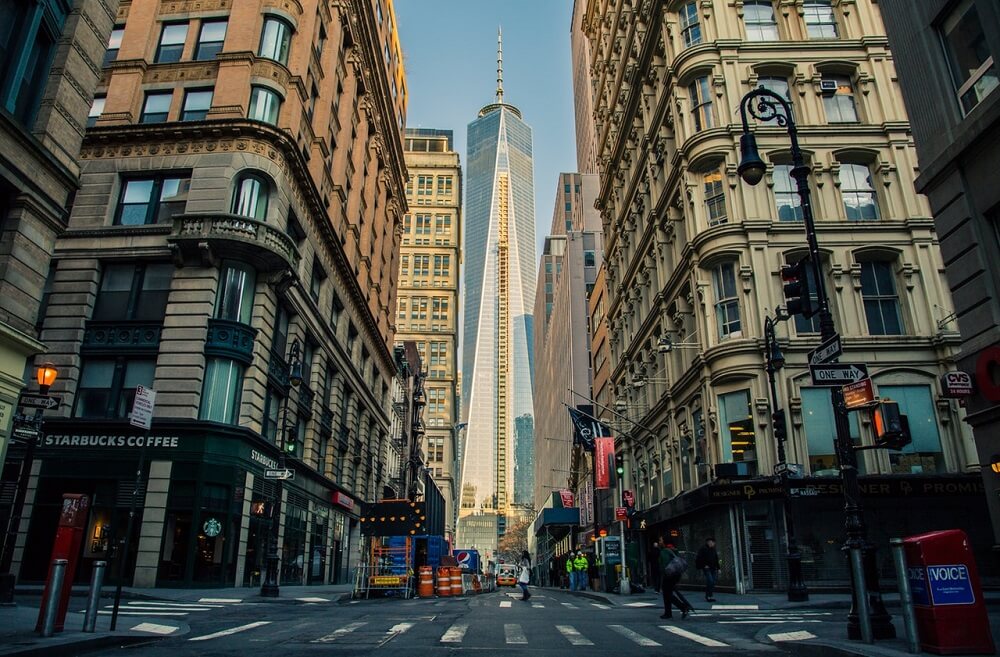 Why is the U.S. economy still vulnerable and why is it risking a collapse? Let’s look at the evidence.

Almost a decade after the 2008 financial crisis, America risks economic collapse. In many ways, it’s already happening. It won’t necessarily manifest itself as a Mad Max or Hunger Games scenario, but it will be bad enough. Portfolios will get wrecked, standards of living will be destroyed, pensions will be slashed, and increasing financial insecurity will come to the unprepared.

We are skeptical about the strength of the so-called “recovery” we’ve witnessed since late 2009. It’s not that we don’t believe it hasn’t occurred – we do – however, it comes with many caveats.

First, U.S. gross domestic product (GDP) growth has been basically flat. Not only is it the slowest growing recovery ever, average growth of 2.1% since 2009 is roughly the rate of inflation. Since true organic growth is the surplus rate of growth excluding inflation, in essence, the economy hasn’t grown at all. They cancel each other out. This, despite the American population, increasing by roughly 18 million people during that time. Some recovery!

The real growth that has occurred has gone to the top 10% of society. Incomes, asset ownership, and discretionary spending for that top group have risen. The bottom 90%, not so much. The top one percent has done even better. Between 2009 and 2013, this elite group captured 85% of all income growth and 100% of that growth in 15 American states. By 2013, these families made more than 25 times as much money as the other 99% of U.S. households. (Source: “The 1% Pocketed 85% of Post-Recession Income Growth,” Money, June 16, 2016.)

This extreme concentration of wealth affects us all. It makes our economic foundation less stable. When an economic collapse inevitably hits the “high earners,” who’s left to pick up the slack? The beaten-down American middle and lower classes? The same people who make less in real income than in 1999, and are more indebted than ever before? Somehow I doubt it.

I believe that the allure of lower interest rates is nearing its endgame. Low-interest rates are unable to stimulate real growth anymore. They only keep demand from collapsing. The downside: America is now faced with the largest disparity of wealth between classes in its history. Despite this, income disparity has one way to go—down. Eventually, factors like increased taxation and white-collar robotics will start eroding income gains at the top. If so, that raises the question: “Will the middle and lower classes be raised up closer to equality to the upper classes, or will the upper classes be pounded down?”

The answer to this question matters. Remember, the silent majority of middle- and lower-income classes can no longer be counted on to keep the “Great American Economic Machine” churning. They are too busy trying to preserve what they already have. That is their jobs, houses, vehicles, and lifestyles. But if an economic collapse hits the “haves” particularly hard, and the “haves” have accounted for most of the economic gains during this recovery, it reasons that the coming recession will be particularly nasty. There will be no class able to pick up the economic slack.

Sure, if you believe the Federal Reserve, everything looks OK on the surface. Household debt spending as a percentage of income is actually slightly lower than it was before the financial crisis of 2008. But interest rates are also half of what they were. If any sort of normalization with rates occurs, it’s game over for the U.S. economy. Loan growth – the absolute lifeblood of the economy—will collapse. That will put the screws on commercial loan growth. Unemployment will increase, and state tax revenue will suffer. Taxes will be forced higher, further exacerbating state and federal finances.

There are no easy solutions anymore.

Underneath the facade of stability, a coming U.S. economic collapse is waiting to happen. Again, this doesn’t necessarily mean that Armageddon is coming to your community. But something is likely to snap. Social security payments to the elderly could get rolled back by double digits. State pensions could receive significant haircuts. The coming massive stimulus needed to pull America out of the next recession could ruin America’s credit rating and torpedo the dollar. Something nasty will happen this time around.

We already see this happening in states like Puerto Rico and Illinois. The latter just raised personal income tax rates from 3.75% to 4.95% just to keep the state running. Illinois has a $6.0-billion budget deficit and $15.0 billion worth of unpaid bills in arrears. This is on top of several tax hikes since 2009 to keep the state pension system afloat. (Source: “What would a state income tax hike cost you?,” Daily Herald, July 5, 2017.)

Despite the state legislature approving the tax increases, credit rating agency Moody’s Corporation (NYSE:MCO) is unimpressed. So big are the Illinois government’s pension, healthcare, and other fiscal obligations that they still may see their credit rating downgraded to “junk.” That would mark the first time that an American state has achieved that dubious distinction. We’re talking about the fifth-biggest state in the Union.

Far from being the only state in dire straits, Connecticut is a fiscal train wreck. Those not closely following this story may be surprised. The home of Yale University and its $25.0-billion endowment fund is also known for its affluent urban neighborhoods. But the state has a massive debt problem and projected budget deficits of $5.0 billion over the next two years.

Big corporations like General Motors Company (NYSE:GM) and Aetna Inc (NYSE:AET) see increasing tax burdens in their future and have relocated elsewhere. Connecticut’s credit rating has been cut four times in a little over a year. (Source: “Connecticut, home to great wealth, may be sinking into a fiscal mire,” FOX News, May 26, 2017.)

Keep in mind, all this is occurring in what is supposed to be “good” economic times. It’s more evidence that a soft type of collapse is percolating right under the surface. Many states throughout America are in similar situations. They face insurmountable debt burdens and pension obligations that they can’t meet. Government coffers, which should be swelling at this stage of the business cycle, are flat. How can this be, if good economic conditions are present? 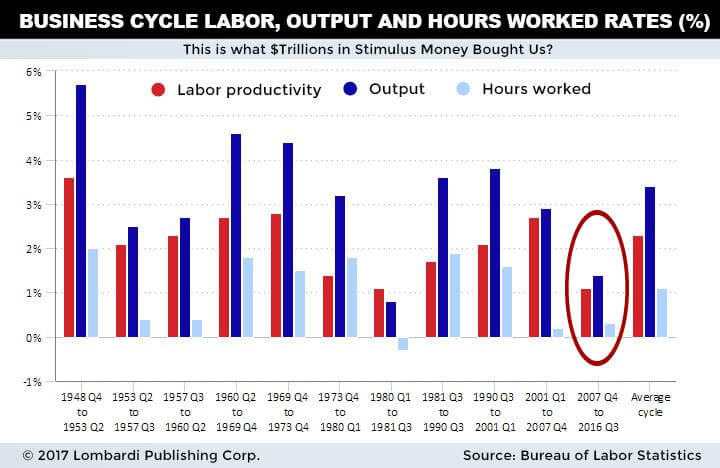 The fact is, the U.S. economic outlook is nowhere near what the mainstream media purports it to be.

Take the monthly gain in Nonfarm employment. Employers have added 16.6 million jobs in the 87 months of sustained growth since February 2010. That’s about 189,000 average added payrolls each month. Sounds impressive, right?

The problem is, the U.S. population has added at least 15 million people since that time. If two-thirds of these people are eligible and able to work, America would need to create roughly 110,000 just to tread water. Thus, the pace of real job growth is really about 80,000 jobs per month, above and beyond what the economy would naturally be expected to create on its own. For a nation of 330 million people, that’s not good.

Job quality is quite poor also. Even former Barack Obama officials admit it. Alan Krueger, a top White House economist serving as chairman of the Council of Economic Advisers, came clean. “We find that 94% of net job growth in the past decade was in the alternative work category… nearly all of the 10 million jobs created between 2005 and 2015 were not traditional nine-to-five employment,” said Krueger. (Source: “Top Ex-White House Economist Admits 94% Of All New Jobs Under Obama Were Part-Time,” Zero Hedge, December 25, 2016.)

Now ask yourself this: “How strong can the economic recovery actually be when 94% of job gains are only part-time?” Obviously, these aren’t the types of positions that pay particularly well or lend themselves to financial security. They are transitory; the “here today, gone tomorrow” type.

Also playing into the illusion of strong job creation is the completely fallacious unemployment rate number. The government tells us that this figure is at a two-decade low of 4.4%. That’s terrific on the face of it, but not so great when you consider that the Bureau of Labor Statistics (BLS) has jimmied with the formulas to make underemployed and discouraged workers vanish from the rolls.

There’s also that little thing about the labor participation rate. It has reached 30-year highs, stuck between 62% and 63% since 2014. If the economy is so strong, why is the labor participation rate collapsing? People didn’t stop looking for work; they became discouraged that they can’t find suitable employment. Not everyone is cut out to work in the service sector.

When you piece the evidence together, the U.S. economy is on shaky ground. Even if we take the “strong” purported data at face value, the recovery is still exceptionally weak by historical standards. When American states are struggling to cope with expansionary periods, they’ll get downright devastated once the inevitable recession hits. This means another round of full-spectrum taxes is on the way.

The bottom line is, economic collapse is on the way. But it will be the economic collapse by erosion rather than decimation. Some people might prefer that America gets pummeled so the economic rebuild can commence, but that scenario is doubtful. The people in charge would prefer you don’t notice your slow decline, while they continue to reap the benefits of the ultra-loose fiscal policy.

As the great George Carlin once said: “It’s a big club, and you ain’t in it.” In 2017 America, truer words have never been said.