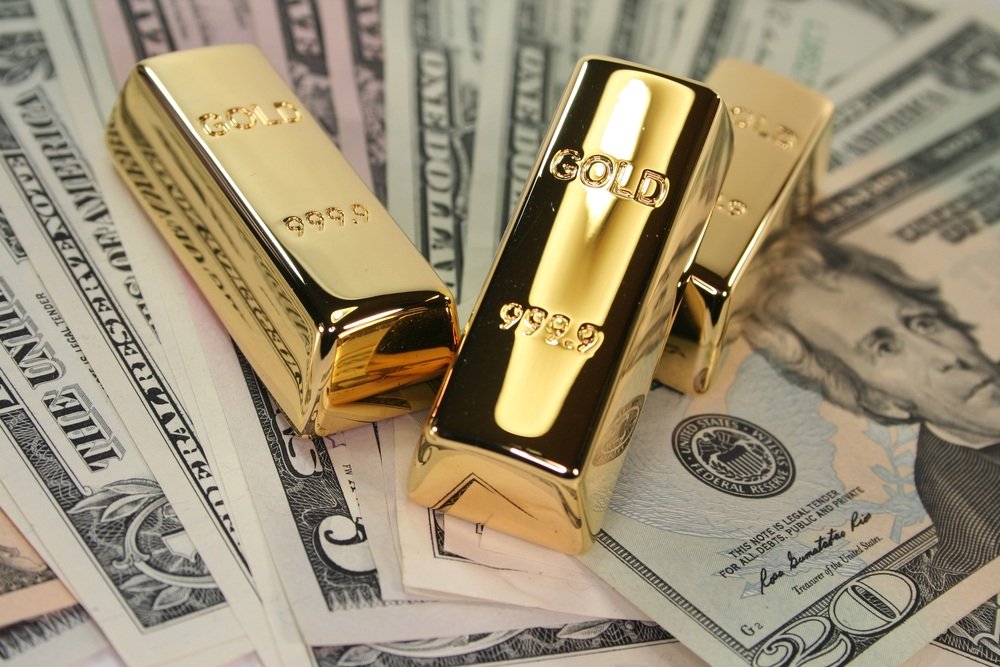 I’m going to take a three-week break. I usually do so at this time each year as in the late summer markets become tedious. I struggle finding something interesting to write about. All that and the need to spend some time with my files to get them back up to speed requires that I take some time off. I’ll be back September 22.

If you believe in the law of supply and demand, you’d expect rising demand (rising trading volume) results in rising prices, and declining demand (declining trading volume) results in declining prices. From January 1900 to January 2000 (100 years) that was how the stock market worked. To be sure, there were days, weeks and the rare occasional month that saw valuations rise or fall contrary to fundamental trends in trading volume. However, over the months and years of any advance or decline in the stock market, complementary trends in market valuations and trading volume held.

But all that changed after January 2000, where the stock market (using the Dow Jones as my proxy) typically advanced on declining trading volume, and declined on rising trading volume. This inversion of the law of supply and demand continued for 16 years, until just after Donald Trump won the November 2016 election.

Record trading volume at bear market bottoms tells me that these were very liquid bottoms. If you wanted to sell you may not have liked the price you were offered, but there was always someone offering you a price for what you were selling.

The bear markets of the 20th century bottomed on greatly reduced trading volume; that means those bear-market bottoms were illiquid markets. In July 1932, or April 1942, or November 1974, you may have wanted to sell and discovered that not only that you didn’t like the price, but the price was from a few days ago with no current bid for what you were selling! But all that changed after January 2000.

What this tells us is how heavily involved the “policy makers” have been in the financial markets since January 2000. And today, seeing the Dow Jones once again rising upward towards another new all-time high on declining trading volume says nothing has changed—market valuations are still being managed. 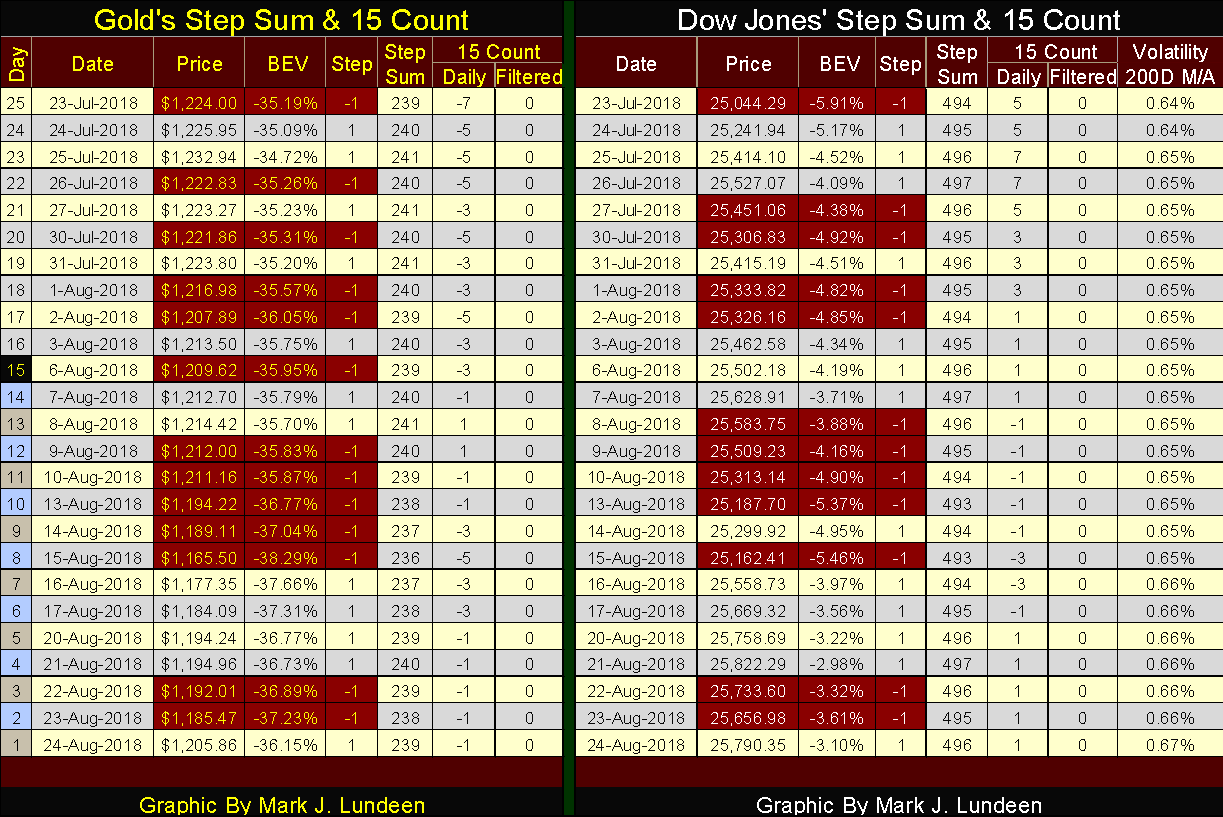 When one looks at historical data quantitatively with metrics such as prices, a step sum, and the 15 count, data whose excitement has been washed away by the flow of time, one seeks turning points; bottoms and tops in the data. They’re always there to be found, extremes to the up or downside that was never again exceeded during any particular market advance or decline.

The same will be true for today’s market data. But unlike examining data from the Great Depression Crash, examining today’s statistics one has to deal with the emotional aspect of being a participant in market history. Looking at markets through our hopes and fears is no way to make money. 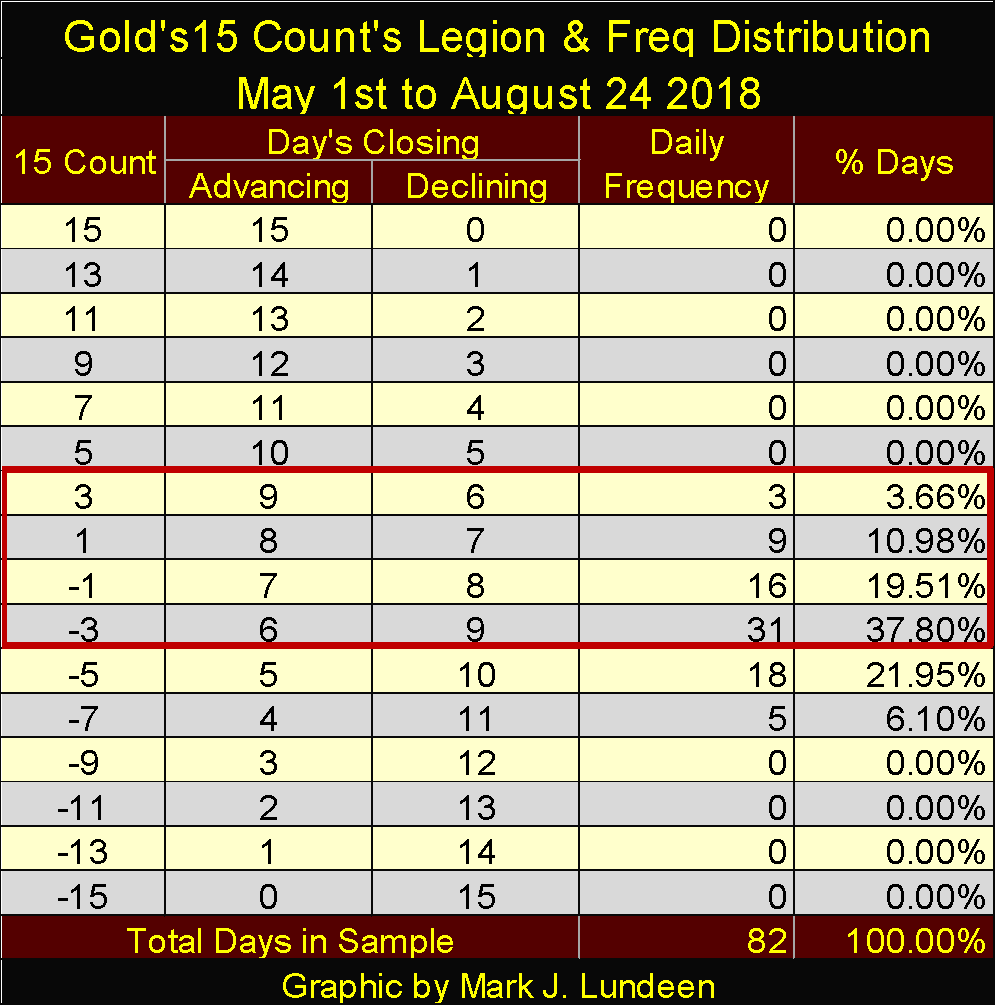 Whether I’m right or wrong about the gold market seeing a bottom on August 15, the truth will be seen in the coming weeks and months. But even if I’m ultimately proven wrong, and the low August 15 doesn’t hold, I can’t imagine the bears being able to force gold to fall below $1,100.

Moving down to gold’s step sum chart below, the current decline in the step sum began on February 1 at 257, over six months ago and bottomed on August 15 at 236. That’s a net of 21 down days in the past six months, which as you can see is a considerable decline in gold’s step sum. But it wasn’t until after May 2 this selling program by the bears began having an impact on the price of gold. All this leads me to believe that gold (silver and the PM miners too) are markets that if left to their own fundamentals would have rather gone up than down since February 1.

I’ll be missing in action until September 22; don’t be surprised if we see a strong bounce in the old monetary metals and their miners before I return.

NBC News published a story of how many bolivars it takes to purchase a chicken in Venezuela.

NBC’s photo of how many bolivars it took to purchase a chicken was so impressive I inserted it in the chart below—so sad. But this is what happens when economics and “monetary policy” are controlled by politics. And politics is always about the needs of the people—the people at the top that is.

And Venezuela’s monetary woes isn’t a rare episode in the history of “monetary policy.” Since Evita told the Argentinian people not to cry for her, they’ve had many opportunities to cry for themselves with several episodes of complete currency collapse since 1945. Monetary inflations have stolen the wealth saved by the common people in many Latin American countries in the past four decades, some very similar to what we see in Venezuela’s bolivar above.

Zimbabwe’s bout of monetary inflation from 10 years ago was one to remember. As I recall, their central bank finally issued a 10 trillion Zim-dollar note. South Africa, now under the control of the African National Counsel, a Communist (Marxist-Leninist) Party, intends to follow in Zimbabwe’s path.

The Brazilian cannabis industry is still in its budding stage

The cannabis market in Brazil is still in its budding stage. Currently, the cannabis companies are putting together the pharmaceutical...

If you’re buying wine in Los Angeles, you would be hard-pressed to find a lot of stores open as cities... 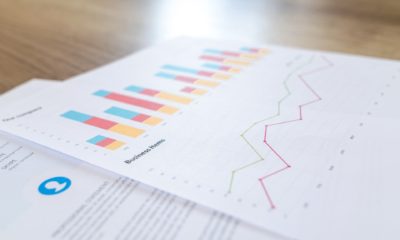 Why disability insurance awareness is important

Disability insurance received its own month because it is recognized as the most misunderstood, but important, of all insurances. According... 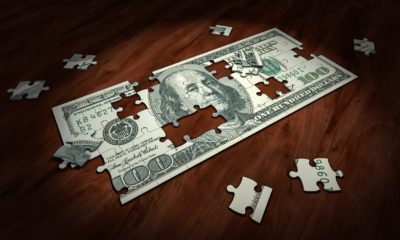 The economic woes on the stock markets could be long-lasting

Who is right? Wall Street with a stock market up 40% from the March lows. Or Main Street with 43...