There are several ways to gain residence in the European Union (EU), including obtaining a wealth visa, which obliges applicants to change their tax residency, opening a business, or marrying an EU national. These strategies work for those who plan on moving there. However, many people want to obtain residency for other purposes, such as to facilitate interaction with foreign banks, travel freely across the EU, or as a safety precaution in case of an urgent need to emigrate (this being one of the major motives among Turkish, Iranian, Russian and Chinese nationals).

A good option in such cases is the so-called golden visa, which are residence permits issued to buyers of real estate or other assets above a certain value. This is the easiest and the quickest way to obtain a residence permit. The most accessible immigration programs in the EU are those offered by Latvia, Portugal, Spain, Greece, and Malta.

Latvia, the leader in the number of residence permits issued, was extremely popular with investors until, in 2014, when country’s parliament voted to increase the investment threshold. Spain and Portugal have always been popular among affluent immigrants, while Malta, which introduced its own golden visa program in August 2015, is only beginning to grow in popularity. 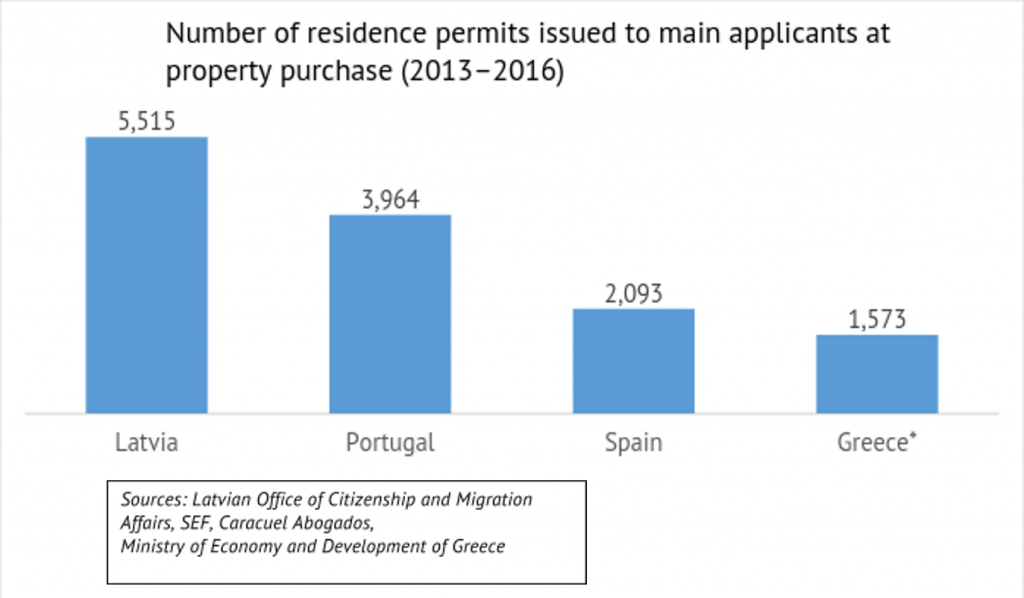 Greece’s golden visa program has received fewer applicants than Spain, Portugal, and Latvia for the 2013-2016 period.

Greece’s golden visa program lags behind the other countries in terms of residence permits issued because of the lack of trust in the Greek economy, prompted by the country’s sovereign debt crisis. However, Greece’s economy is starting to look better—unemployment has been decreasing since 2013, and, according to the International Monetary Fund (IMF), the country’s GDP will grow by 2.8% in 2017.

According to Tranio experts, Greece’s golden visa offers the most beneficial terms for investors for a number of reasons.

Greece offers the cheapest residence for investment. Applicants must buy one or several properties totaling at least €250,000. The same amount is specified in the Latvian program, but, under its conditions, investors must pay a 5% non-refundable fee, which increases the investment threshold to €262,500.

A residence permit in Portugal can be obtained by purchasing a property worth €350,000 if built over 30 years ago or located in areas of urban regeneration, or €400,000 if situated in low population density areas. More liquid properties must cost at least €500,000. Spain offers the same starting price in its program. 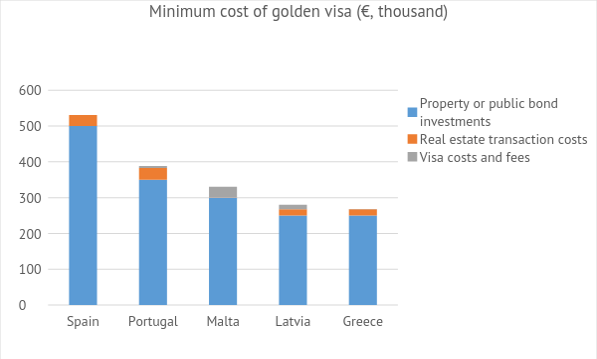 Greece’s golden visa costs compared to other EU countries that offer it.

2. Opportunity to buy several properties or participate in a large project

The Spain, Portugal and Greece’s golden visa programs allow the purchase several properties to meet the minimum investment threshold. Latvia allows this only in small cities, with the exception of the popular Riga and Jūrmala, while Malta only allows investing in one property. The Greek and Portuguese programs also allow collective investments, provided that the applicants’ investments are not less than the established threshold values.

The price of real estate in the centers of large Greek cities, which average €1,300 per square meter, is the lowest among the five countries, and almost twice cheaper than in Spain and Malta, and 1.5 times cheaper than in Portugal.

The price difference between Greece and Latvia is not so significant (about 10%), but the price growth potential is higher in Greece. According to official data, real estate in Greece is 44% cheaper compared to its 2008 peak, while in Latvia it is 27% cheaper. It should be noted that since the global financial crisis, property prices in Latvia have already experienced volatility (associated with the activity of Russian buyers). Property prices in Spain are approaching peak levels, while prices in Portugal and Malta have already exceeded pre-crisis figures by 2% and 10% respectively.

Golden visa holders often do not need the purchased real estate and instead lease it to compensate for the investment. In Greece, Latvia, Spain, and Portugal, investors are free to do so, while Malta prohibits the lease of such properties during the first five years of ownership. In this case, the most lucrative scenario for owners of property in touristy locations would be to rent out their properties for short terms, as this type of lease returns higher yields compared to long-term rentals.

According to World Tourism Organization (UNWTO) statistics, Greece outnumbers Portugal twice and Latvia by 10 times in terms of international tourist arrivals. International tourists visit Spain approximately three times more often, but thanks to a difference in prices per square meter, Greece yields a higher investment profit: about five percent after tax and management company expenses. While rental rates for flats in Athens oscillate between €50 and €70 per night and between €70 and €90 in Barcelona or Lisbon, real estate prices in these cities differ by almost three times: the average price per square meter is €1,265 in the center of Athens, €3,317 in Lisbon and €4,399 in Barcelona.

Therefore, Tranio believes that the most reasonable choice for investors wishing to obtain a golden visa would be to buy tourist apartments in central Athens for short-term leases. This allows them to obtain Greece’s golden visa and to secure a “safe haven” asset, and also a potential income of five percent in foreign currency.