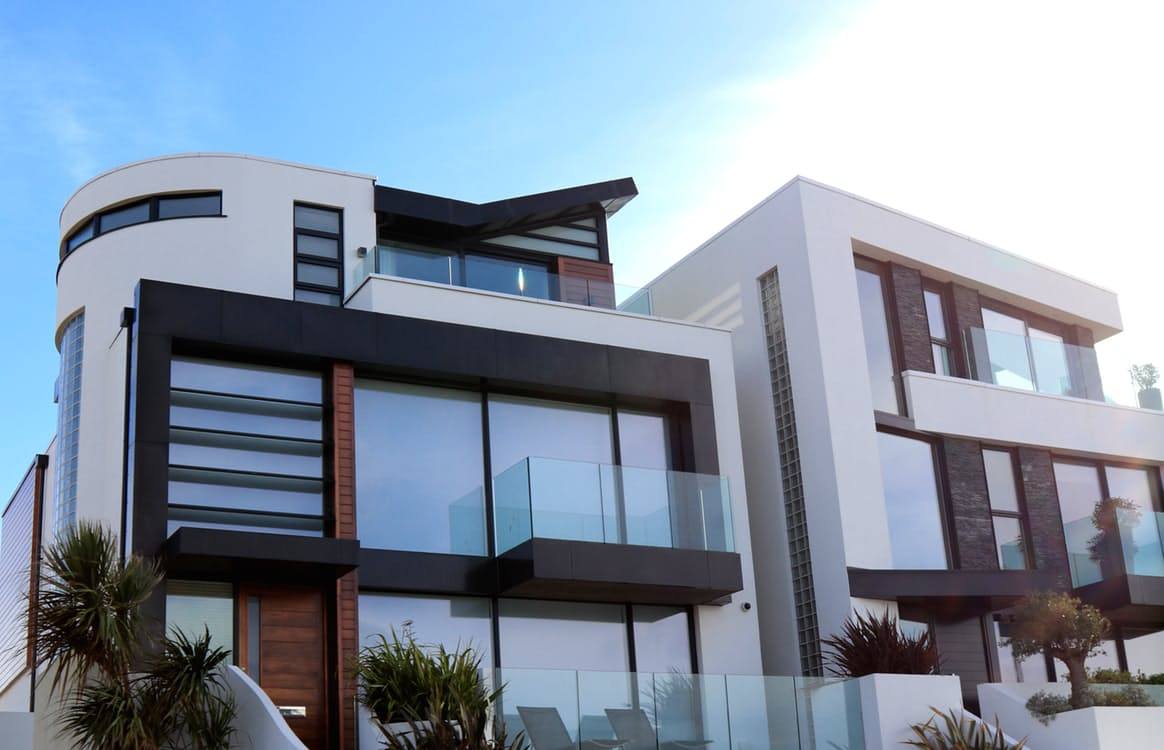 Recent analysis of the US real estate market reveals that the housing demand will experience a steep drop in 2040.

I expected Japan’s 67% drop in residential real estate to rebound substantially, even with its smaller, but still substantial millennial generation. But that hasn’t happened. So, I went digging to find out what was going on.

I’ll admit that this had me stumped for a while… until I began to understand that real estate was different than other consumer sectors of spending. It’s obviously not a consumable like food or clothing. But it’s not like a durable product either, like cars and washing machines. Real estate, with the exception of natural disasters or human insanity (arson, wars, etc.), tends to last forever.

This lead me to the realization that I couldn’t just predict the housing cycle by lagging births 41 years for peak spending there. I also had to subtract the dyers at age 79 (because dyers are obviously sellers!).

Here’s the result in net housing demand, allowing for later retirement in the future. It’s a whole different, and more sobering, picture… 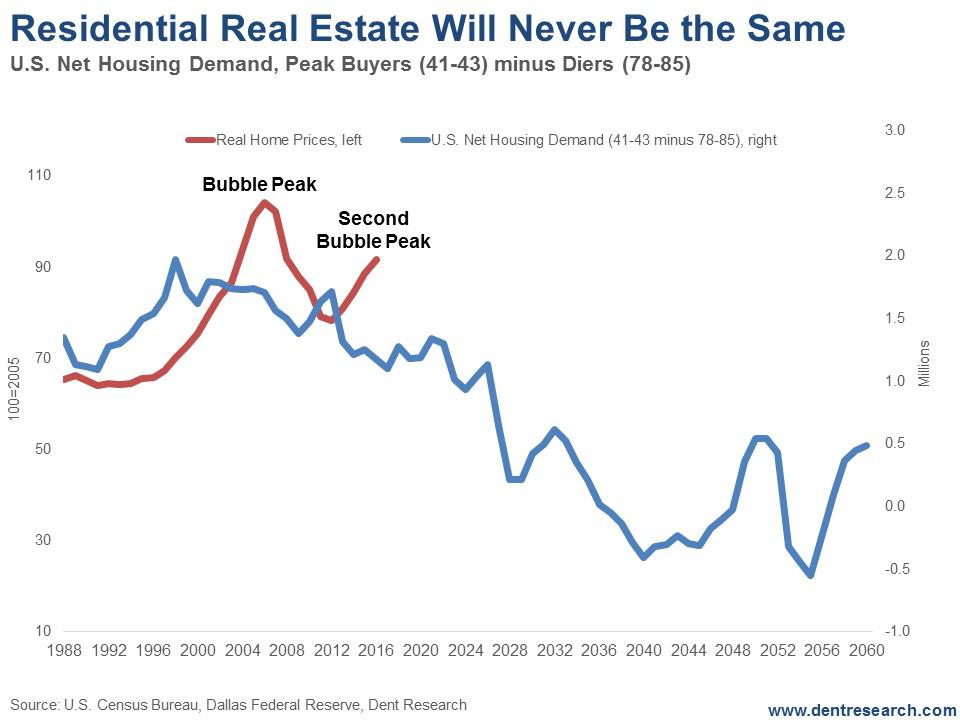 Just look at that!

After this brief bounce in housing demand in recent years, net demand will drop into 2040.

Basically, we don’t need to build more houses for a long time, if ever!

Knowing that, do you want to be a housing developer, or even invest in them?

Yes, residential real estate will never be the same! It most certainly will be nothing like what we experienced into 2005.

The same logic applies to commercial real estate. It gets hit harder in downturns as businesses voluntarily abandon leases and real estate faster than households do (after all, we’re more emotionally attached to our homes!).

Commercial real estate is driven by the combination of new entrants adding to the workforce at age 20 (on average) and leaving the workforce when they retire at age 63 (although that retirement age trends up a bit in a bad economy, as we’ve seen in Japan).

So, look at this chart next chart, which allows for slightly later trends for millennials: 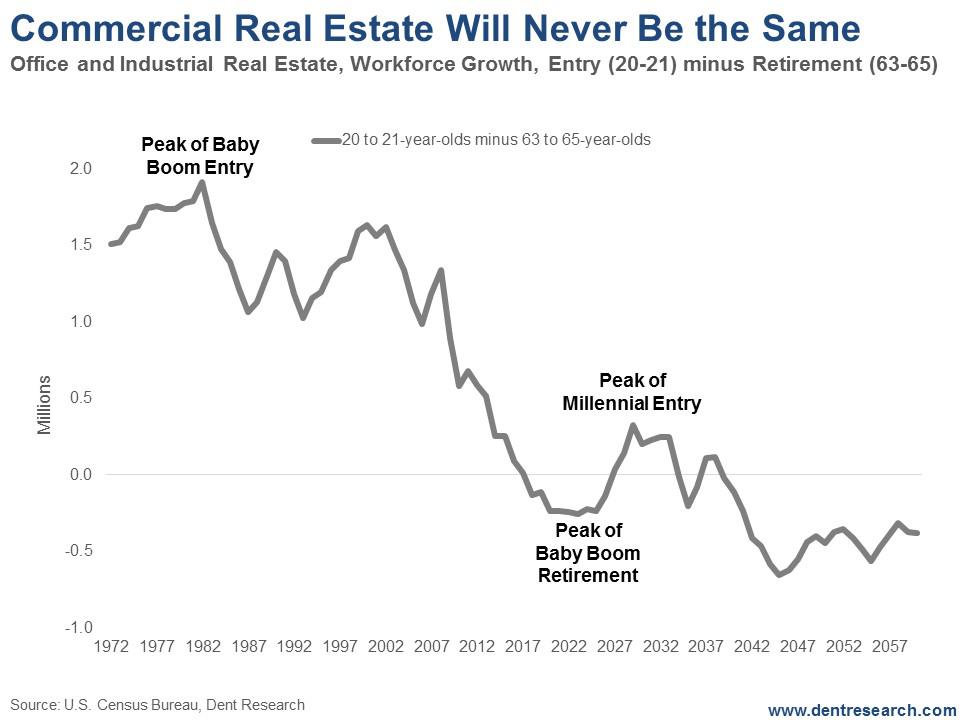 This chart shows that the fundamental trends driving commercial real estate have been trending down since 1981, and more so since 2000, and won’t turn up again until around 2023. Even then, growth won’t be nearly as strong as it was in the baby boom expansion.

However, the trends in commercial real estate aren’t as bad as they are in the residential space because baby boomer retirements peak in 2026 while their deaths don’t peak until around 2044.

Then there’s the retail sector that will be impacted by the natural spending trends reflected in our Generational Spending Wave. Those trends, in the U.S., peaked in late 2007 (just as I predicted a long time ago that they would). Only massive QE has offset those declines and limited the effects… but that can’t continue forever.

But besides the demographic challenges the commercial sector faces, there’s another demon out for blood. Amazon, among many other Internet retailers, is taking market share from brick-and-mortar stores. Major warehouses skip the retail level and ship direct, don’t use as much real estate space, and certainly not prime/Main Street space. Unless we have some major catastrophe that sees us return to a world with no Internet, I don’t see this trend reversing!

SEE ALSO  2018 health trends: Which ones are you trying?

So, what will do well, in an aging and Internet-intensive world with less need for brick-and-mortar real estate?

-Vacation and retirement sectors, but only after they crash in the next three years or so, and only into around 2026 or 2027.

-And the very best nursing homes and assisted-living facilities (that won’t peak until around 2050!).

In short, we’ll never see a near non-stop and unprecedented real estate boom like the one from 1933 to 2005 again. Not in our lifetimes. And not in the U.S. Maybe emerging countries like India have a shot at it, but not us.