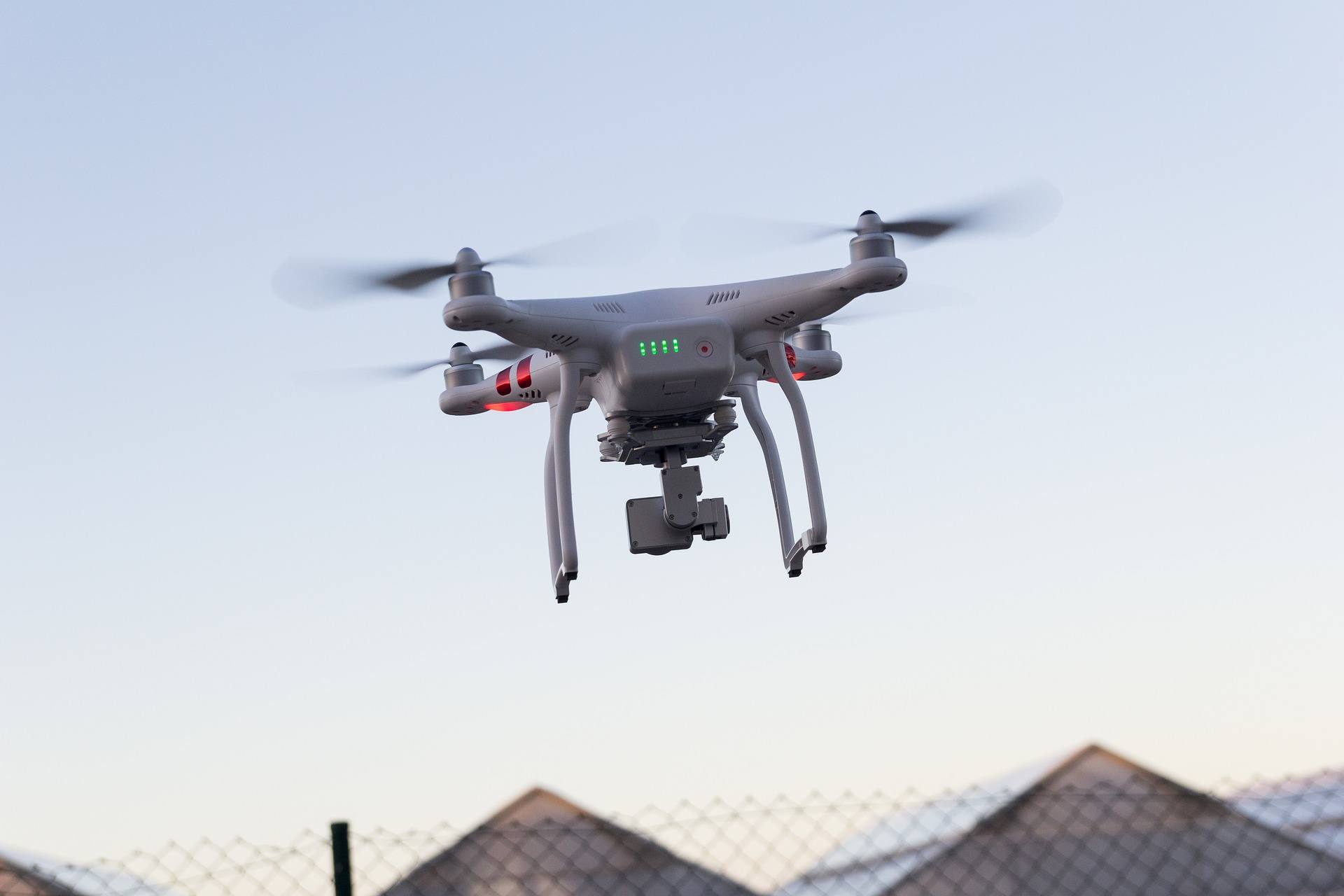 Many drivers and commuters now take the Waze app for granted. It seems so ordinary now to use that interactive, GPS-based app to spot potential traffic congestion and then rely on it to tell them the fastest route to take.

However, technology—to use an old expression from a more low-tech era—can be a double-edged sword. According to Police Magazine, police in the U.S. has expressed concern over Waze because some criminals have been using it to spot the presence of police vehicles. This way, criminals can adjust their route to avoid detection and capture—and sometimes, they use Waze to actively seek out police officers and cause harm.

Still, usually, it’s the police who have the advantage when it comes to high-tech tools for deterring, preventing, and solving crimes. Over the years, law enforcement has been investing heavily in new technology to help with many aspects of the job. New technology doesn’t only let police perform their duties more efficiently, but also more safely, so there’s less collateral damage to themselves and civilians. Let’s take a look at some of these technologies:

It’s not always the smart thing to do for police officers to run in with guns drawn—especially in a risky area. The place where a crime has been or is currently being committed might be fraught with risks. A house or building would have corners and rooms that could present hazardous surprises. What if the scene of a crime is dark? Or what if armed suspects are hiding behind a wall, or have left a bomb behind?

In an active or recently vacated crime scene, there are simply too many risks and many unknown variables. There’s an option to send in a highly-trained police dog first—but that would also be putting the animal at risk. As Computer World reports, if such an animal is injured or killed there’s both a financial and emotional cost. A police dog can cost up to US$20,000, and there’s the grief to be felt by his human comrades. 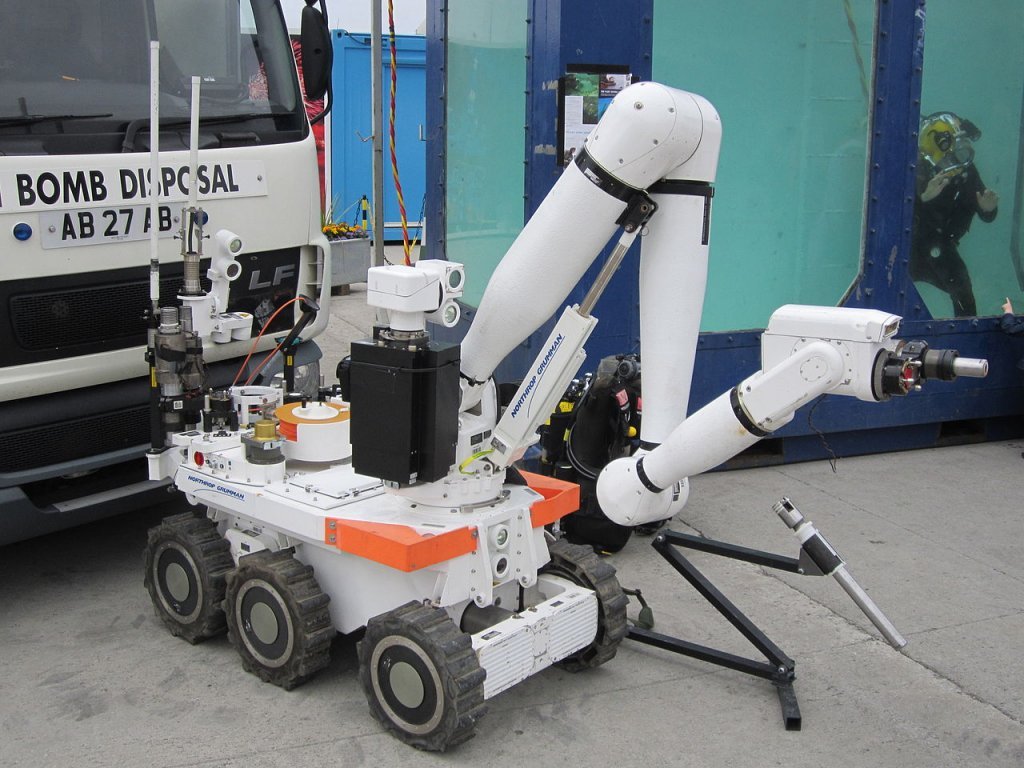 Police use robots to dispose of bombs hidden by perpetrators within the crime scene. (Photo by Rept0n1x via Wikimedia Commons. CC BY-SA 2.0)

Fortunately, there are now robots and drones that can go safely where no police officer (or dog) should dare go. One example is the Recon Scout Throwbot. This is a robot on wheels that police deploy simply by throwing it through a door, window, or passageway. The robot’s cameras capture the events at the scene and are remote-controlled.

Dubai has also led the way for a more advanced police force with its launch of an Android police officer. Google, together with IBM, is working with the Dubai police to create a virtual assistant which will allow the robots to follow voice commands in the future.

Another example is the flying drone, usually referred to as an unmanned aerial vehicle or a micro-air vehicle. Like the ground-based robot, this device also lets police conduct surveillance safely, from the air. All the information gathered by these robots and drones are admissible in court—and their cost has been dropping so more and more police departments will be using them.

There are also devices that police themselves bring along to gather data in real-time. These devices can connect to a database so that all the collected and recorded data can be analyzed later on. Such devices would include Google Glass, iPads, and even smartphones. These provide various ways for police to gather data to help them find suspects, record or report crimes in progress, or get information that helps them make smarter and safer decisions at the actual crime scene.

Laptops used to be the required high-tech gadget in a police vehicle—but the portability of new data devices have made them obsolete. For example, Google Glass can be used to scan a scene and spot license plates, addresses, and even actual suspects through facial recognition software. 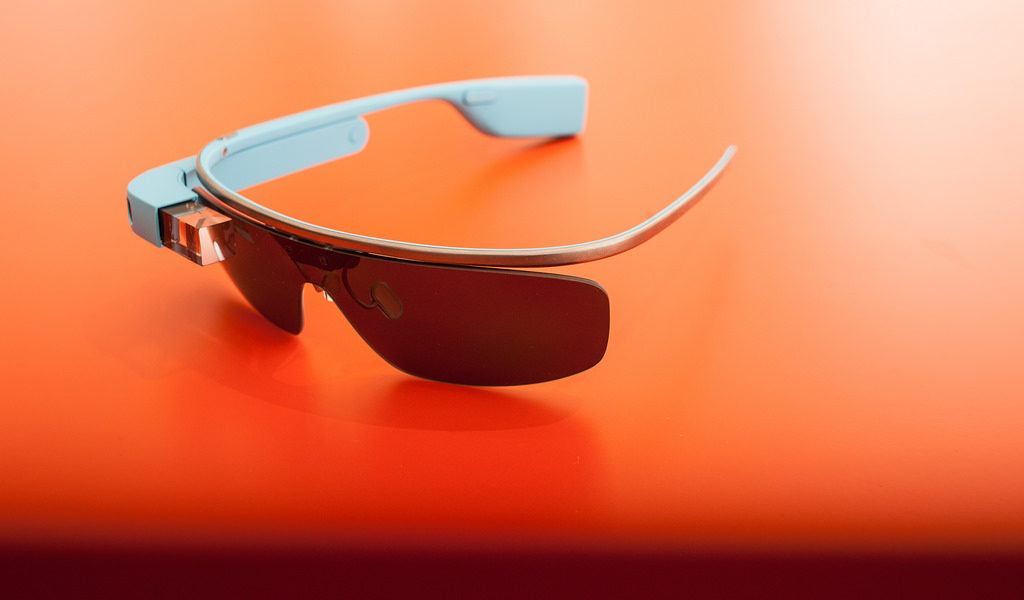 Google Glass (pictured) can scan a crime scene, detect license plates and identify suspects with the help of facial recognition. (Photo by Giuseppe Costantino via Flickr. CC BY 2.0)

Speaking of scanners, there’s now a special radar that can see through walls. This RANGE-R allows police to see what’s happening behind walls where armed and dangerous suspects might be hiding. The device uses Doppler radar technology to “see” and sense motion of possible combatants hiding behind walls.

It has a cousin, another “thru-wall sensing” device, called EMMDAR, but uses electromagnetic waves instead. Both are made by L3 CyTerra, a firm that specializes in creating detection devices to be used in various environments and landscapes–for military, humanitarian, and homeland security purposes.

All the data gathered would be of little use if their meaning, relevance, and real-world implications are not processed and analyzed. This is where AI software aids human analysts in not only understanding data but also predicting where and when the crimes can probably occur.

This is possible primarily because crimes tend to happen in clusters—depending on many variables. The clustering could be due to the presence of gangs or crime suspects in a particular neighborhood, or because there are commercial establishments in an area that make attractive targets.

Whatever the variables are, police are now able to gather and make sense of the data and make informed decisions on when to send patrols, identify areas where police presence is needed, or where police should develop closer ties with the community, gaining their trust so that people are encouraged to report criminal activity.

New technologies for law enforcement and crime prevention are here to stay and are bound to create new products and systems that are more effective and less costly. This bodes well for investors who will put their money on companies developing such technologies, but also for the public, whose safety will be more assured.