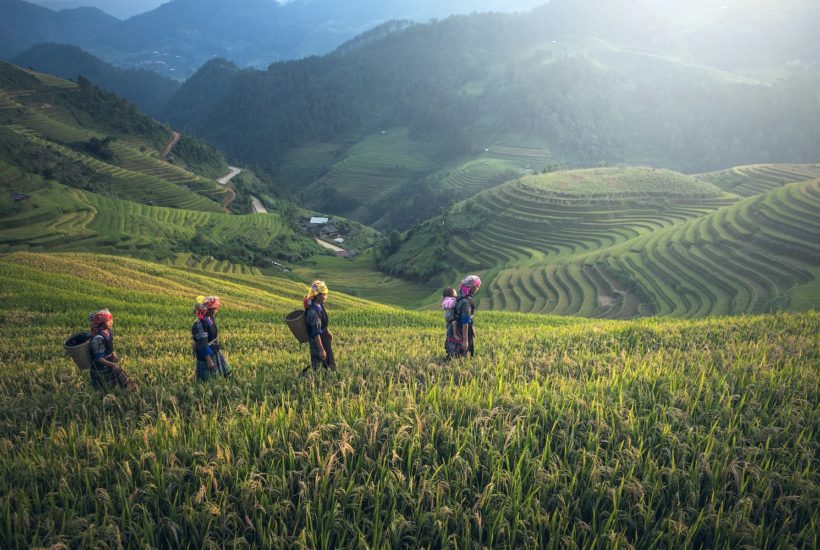 Winter Wheat markets were higher last week after another choppy week of trading. Wheat has traded in a choppy fashion all week as the market tries to decide which way Wheat prices are going here and overseas. Spring Wheat was developing under good growing conditions in both the US and Canada. Yield reports from the central and southern Great Plains have been variable, but generally a little better than expected.  Soft Red Winter yields are high. The Winter Wheat markets are in down trends on the weekly charts. It is still dry in France and Russia and now Spring Wheat areas of Russia are being affected. Russian Winter Wheat yields have improved over time as harvesters move into areas that had better growing conditions. Australia remains in good condition and is getting beneficial rains in the east. The west is too dry.  About half of the Argentine Wheat belt is too dry.

Corn was higher on the bullish FSA data and as a derecho in Iowa and northern Illinois flattened many Corn crops in both states. FSA showed less than expected certified area for Corn in its August update, but cautioned that the data was very incomplete due to restrictions imposed by Covid 19.  However, the market took the data as true and ran with it. The derecho brought 100 mph winds to parts of Iowa and Illinois and flattened many Corn crops. Some of these crops will not recover. Some silos and other storage and processing facilities were damaged or destroyed. It is not known how much of the Corn can recover. Initial loss estimates are up to a half-million bushels lost. Corn in surrounding areas looks good and USDA called for record yield potential in its reports last week.  These ideas are now in doubt due to the derecho and the losses it caused.

Soybeans were sharply higher last week in response to a derecho passing through Iowa and Illinois and bullishly construed FSA certified acres data. The USDA production reports and supply and demand reports were negative as USDA showed higher than expected yields and increased production. The FSA data showed much less than expected certified acres in its August reports. FSA said that the data was very incomplete due to a lack of registration due to Covid 19 restrictions, but the market took the data and ran higher. It found additional support from a derecho that damaged some Soybeans, especially in Iowa and northern Illinois. USDA noted that China had bought a lot of new crop Soybeans in its weekly sales report on Thursday. China has become a much more active buyer of Soybeans here in the US and has promised to ramp up purchases in order to comply with commitments it made under the Phase One trade deal. Its commitments have been thrown into doubt by the continued political tensions between the two countries. Brazil prices are higher for the rest of the world as it starts to run out of Soybeans to export, so China and the rest of the world will look to the US for additional supplies. The US weather is considered mixed for Soybeans with cooler temperatures and some rain in the north, but dry conditions further to the south.

Rice was higher last week as the harvest is active near the Gulf Coast. The weekly charts show that futures are in a short term trading range but the daily charts imply that higher prices are coming. New crop prospects appear solid for increased production in the coming year. The area is larger and the growing conditions are mostly good. The crops are called in good condition in Mississippi, Arkansas, and Missouri. Texas and southern Louisiana field yield reports are strong. Export demand for the new crop Rice has been slow to develop as buyers wait for lower prices. Domestic demand has also been less. It looks like many buyers bought and hoarded Rice during the first pandemic scare and are now full of supplies. The USDA production reports showed increased area but less yield potential for overall larger production this year. Demand was cut so ending stocks were bigger.

Palm Oil closed lower on worries that prices were too high for demand and despite more reports of less production from Malaysia and Indonesia. Wire reports from Indonesia last week highlighted more than 8% less production and 7% esports from that country. Flooding and a lack of workers for the plantations have been the reasons to see less production in Malaysia. Palm Oil has been hoping for better demand from importers as world economies slowly open after being closed by the Coronavirus epidemic. Indonesia continues to focus its Palm Oil on internal demand for biofuels. Soybean Oil was a little higher and Canola was lower. Soybean Oil found support on increased demand ideas. Canola closed lower on good growing conditions in Canada and the stronger Canadian Dollar. The strength in the Canadian Dollar is more about weakness in the US Dollar than anything going on in Canada. Crop conditions are mostly good and farmers have been selling old-crop supplies. The weather has been warmer the past couple of weeks and most areas have seen rain.

Cotton closed a little higher for the week and in response to the USDA production reports that showed less production this year. West Texas weather remains detrimental for crop development as the region has been very dry and hot. The hot and dry weather extends north into Oklahoma and western Kansas. Export demand for US Cotton has been poor for the last few weeks. Export demand is the primary demand for US Cotton so poor weekly sales means weak overall demand. The retail demand has been slow to develop as many consumers got hurt economically due to stay at home orders during the height of the pandemic and have little disposable funds to spend on clothes. Demand will slowly improve but the industry should have plenty of supplies to work with in the short term. The US weather situation is mixed, with good rains noted in the Southeast and good conditions in the Midsouth. However, it has been very hot and dry in West Texas and farther to the north and crops there are suffering.

FCOJ was higher for the week but the weekly charts still show downtrends. The Coronavirus is still around and is still promoting the consumption of FCOJ at home. But, restaurant and foodservice demand has been much less as no one is really dining out. Florida production prospects for the new crop were hurt by an extended flowering period, but the weather is good now with frequent showers to promote good tree health and fruit formation. Import demand to the US should be minimal as US prices remain below those of Europe. Brazil has been too dry and irrigation is being used.

Futures were lower in New York and higher in London. Chart trends remain up for at least the short term. Demand has generally been weaker. The US CPI indicated that inflation could be developing. Vietnam was dry during flowering time and is dry again. Production ideas are lower.  Vietnam is also reported to be having problems with shipping due to lockdowns from the Coronavirus.  Demand overall remains down with the US still locking down due to the Coronavirus resurgence in some states. The demand from coffee shops and other food service operations is still at very low levels. Consumers are still drinking Coffee at home and the return of the Coronavirus outbreak will keep things that way. Reports indicate that consumers at home are consuming blends with more Robusta and less Arabica. Europe is emerging from lockdowns, but the Coronavirus has ramped up as the lockdowns are eased and that bas hurt overall economic activity there. The Brazil harvest is active but shipping and collection have become very difficult due to the widespread outbreak of the Coronavirus there.  Even so, the pickers are showing up for work and ports are operating normally.  Ideas are that production will be very strong this year as it is the on year for the trees. The strong production ideas are coming despite hot and dry weather seen in the country at flowering time.

New York and London were higher. A potential vaccine for Coronavirus designed in Russia gave hopes for improved demand potential down the road. The daily charts show that Sugar is back in the recent trading range and is in the upper end of that range. Ideas are that there is plenty of Sugar for the world market. Getting the Sugar moved is becoming more difficult with the widespread Coronavirus outbreak in both Brazil and India. Brazil mills have shifted part of the crush to Sugar production due to less ethanol demand.  India is thought to have a very big crop of Sugarcane this year but getting it into Sugar and into export position has become extremely difficult due to Coronavirus lockdowns. Thailand might have less this year due to reduced planted area and erratic rains during the monsoon season. There are reduced flows from rivers from China to hinder irrigation of the crops.

New York closed higher and London closed lower. New York found fund selling after failing to hold new highs for the move at strong resistance areas on the charts. News that the West African harvest is now about over means less selling pressure from origin. There are a lot of demand worries as the Coronavirus is not going away and could be making a comeback in the US. Europe is still trying to open its markets again but the Coronavirus is still around and consumers are reluctant to buy.  Harvest is now over for the main crop in West Africa and the results are very good. The reports from West Africa imply that a big harvest in the region. Ideas are that Southeast Asia also has good crops.