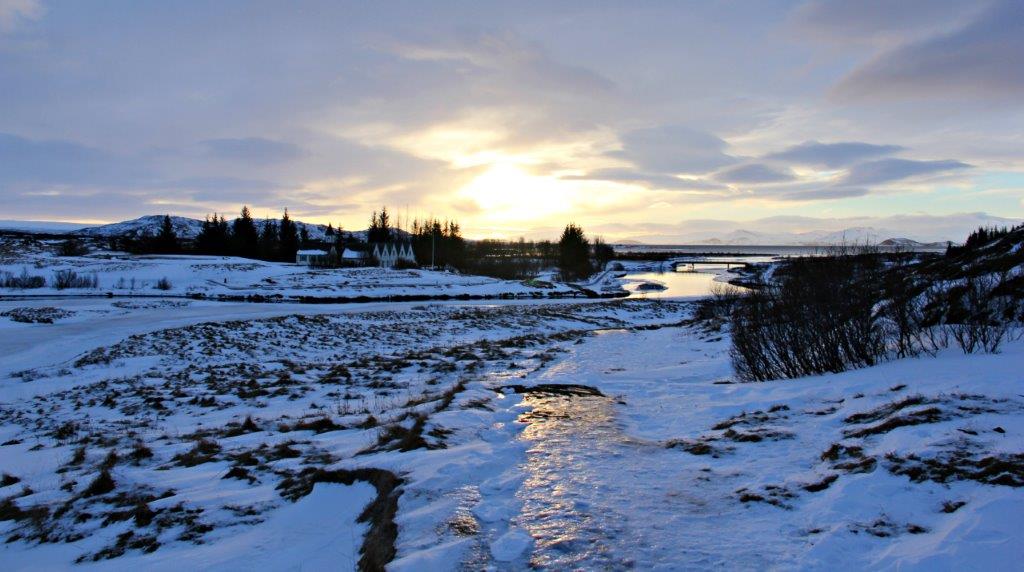 Although Iceland is far up north and is reminiscent of winter holidays, it can offer a lot to visit at any other time of the year.

Is Iceland on your bucket list? It was on ours for a long time. On our last trip to Europe, we decided to do something about it and we made a stopover in Iceland. It is easier than you might think and it is a great stopover destination all year round.

Icelandair. WOW, and Norwegian Air are a few of the many airlines offering service to Iceland and allowing for an easy stopover between the UK or Europe and the United States. Or just a quick round trip from many cities in the United States and Europe.

What to do in Iceland

Known as the Land of Fire and Ice, Iceland is a natural wonderland. With everything from volcanoes to glaciers, geysers, and beautiful hot springs (with world-class spas), there is something for everyone no matter what your interest.

The word for geyser originates in Iceland. Near Gullfoss Waterfall, you can see both geysers (geysirs in Iceland) and this amazing waterfall. The geysers erupt regularly. Combine this stop with a visit to Thingvellir National Park the site where the Icelandic parliament was founded in 930.  We saw people scuba diving in the icing waters near Thingvellir!

One of the highlights, in a country full of highlights, was Reynishverfi Beach, the black sand beach near the town of Vik. The black beach is covered with small, smooth black rocks resembling river stones. Throughout Iceland, you find jewelry made of these stones. The pictures below look black and white, they are not, everything for as far as you can see is black volcanic rock. Walk all the way out to the beach and the reward is a wall of tessellated black stone. Vatnajokull National Park, with several large glaciers, some of which you can walk on, is a great stop driving to or from Vik. 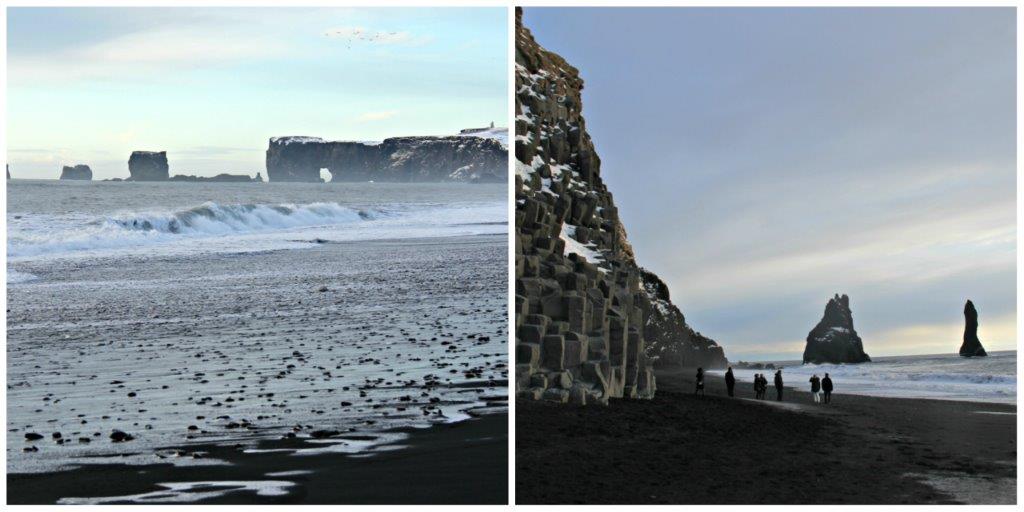 Just south of Reykjavik, is Grindavík, an area known for its geothermal activity and the famous Blue Lagoon, (well worth a visit!). Having driven around Iceland for several days before arriving here, it was fascinating to find not only was there no snow, but instead, a lush green ground covering resembling moss was common on the rocks. Obviously, the ground is warm enough from the geothermal activity to melt the snow and provide enough warmth for plant life.

Dotting the hillside are Iceland’s iconic churches. Each town has a church and some are very remote. In Reykjavik, the cathedral, known as Hallgrímskirkja is the largest church in Iceland and one of the tallest buildings. 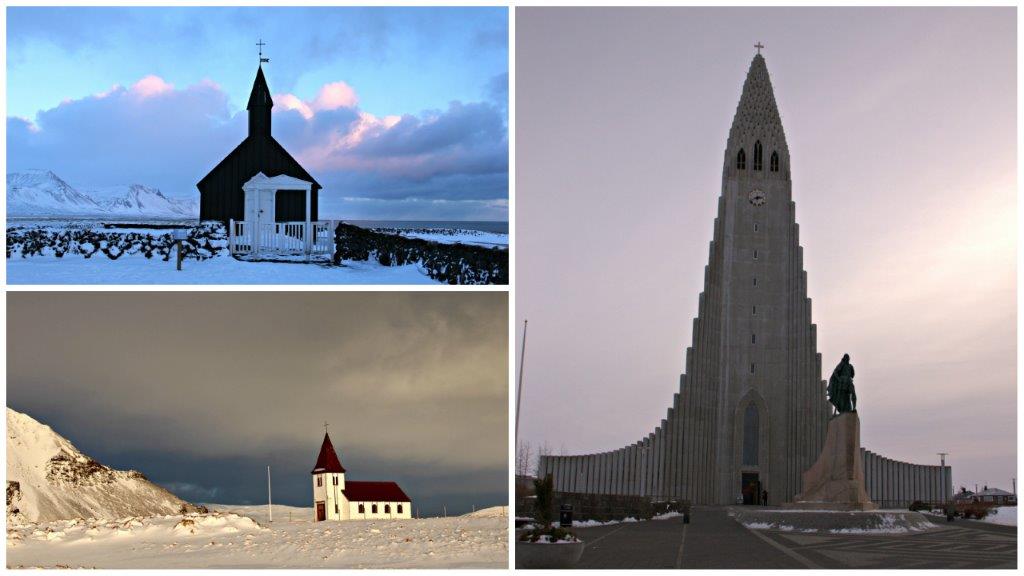 If you would like a bit of culture, Reykjavik has you covered with the stunning HARPA. The all glass concert hall and conference center glistens on the edge of Reykjavik Harbor. It is home to both the Iceland Symphony Orchestra and the Icelandic Opera.

In the Winter the Northern Lights are one of the main attractions. Nights are long with the sun rising about 11 am and setting somewhere around 4 pm or so. Ice clings to the waterfalls creating some spectacular photos.

Summer offers fantastic opportunities for hiking. Take advantage of the long days and plentiful sunshine. It is a great time to explore the remote eastern side of Iceland.

And any time of year offers great opportunities to see wildlife including viewing the puffins and whale watching in Iceland. Icelandic horses are a breed unique to Iceland. Over 1000 years of breeding has developed a horse well suited to farming and living in Iceland’s climate. Go for a horseback ride or watch one of the stunning horse shows or traditional horse races. 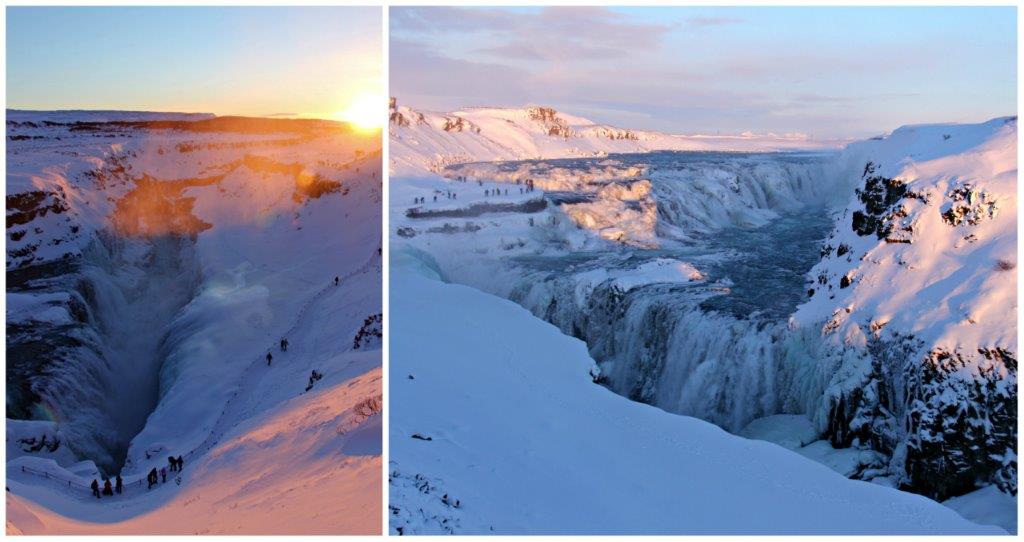 What to eat in Iceland

Lamb and fish are common in Iceland and very good, both are found everywhere. Fermented shark, Hákarl, is one of those traditional foods you should try once (but probably will never try again!). You can try a small piece in the fish market in Reykjavik for free and trust me that is plenty.  Another traditional Icelandic food to try in the fish market is Hardfiskur, or “hard fish” a dried fish resembling jerky.

Skyr (pronounced skeer) resembles yogurt but is actually a soft cheese high in protein. Both plain and fruit flavors are sold in yogurt like tubs in shops or look on the menu.

Brennivín, is traditional Icelandic schnapps.  There was a small flask-shaped bottle and small shot glasses at breakfast at the hotel. We thought this was a morning shot to start your day! No, it is cod liver oil which has many health benefits. If you see it, give it a try.

A unique opportunity is to cook over geothermal steam, a common Icelandic cooking method. Several dinner items at our hotel were cooked over natural steam and you could cook your own egg at breakfast. 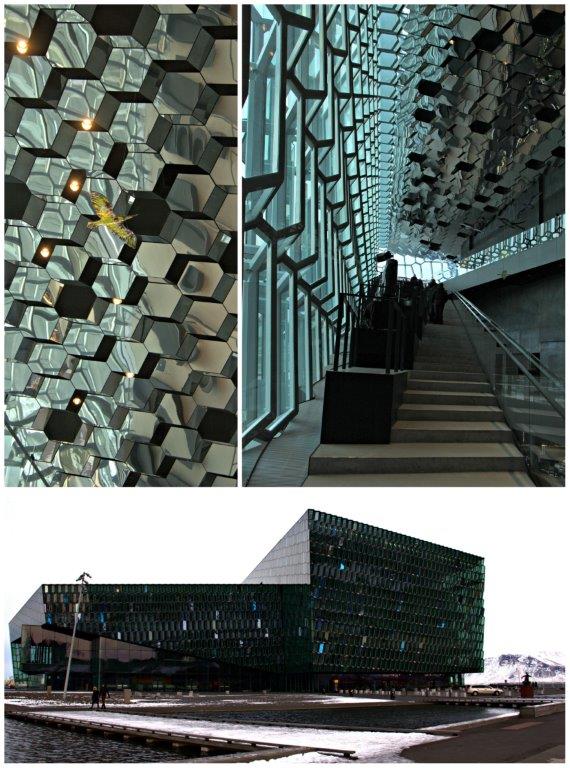 Where to stay in Iceland

Accommodation options cater for every budget from hostels and farm stays to luxury accommodation. We advise choosing a hotel near your destination as driving times can be quite long. We stayed at 3 different hotels in our 5-day stay. One in Búdir in the north, one in Hveragerdi, an area known for its geothermal activity, and a couple of nights in an apartment in Reykjavik. This worked out well for us, allowing us to see and explore in the daylight while limiting our time spent driving. 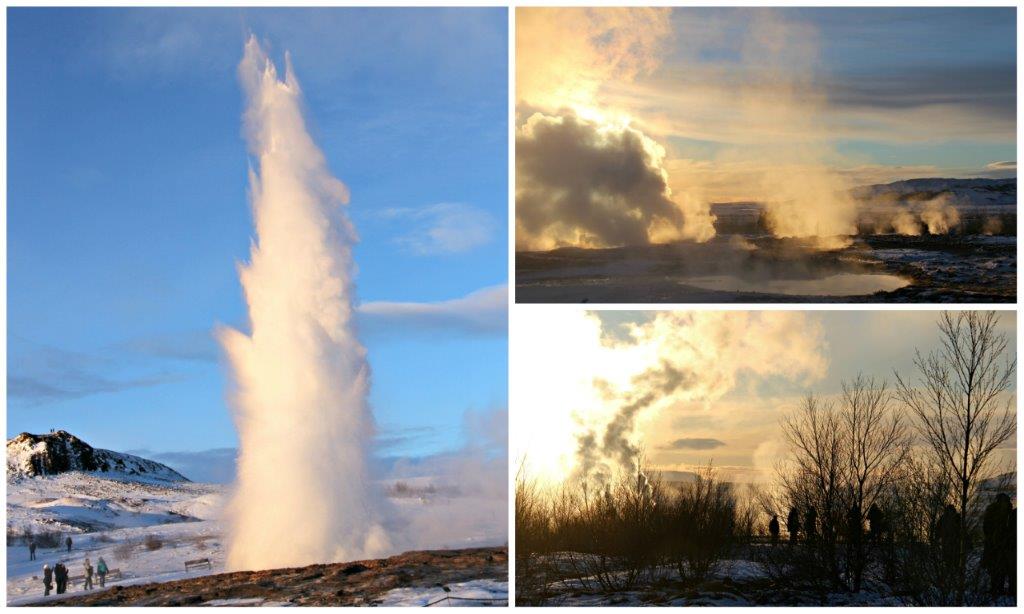 We rented a car so we could drive and explore at our leisure. If you prefer not to drive there is bus service, as well as shuttles from the airport to many tourist destinations.

In the winter, most roads were clear and there were plenty of cars (not SUVs) on the road. Keep in mind in the winter, quite a bit of your driving will be in the dark due to the short days.  Iceland’s roads are not busy and tourist activities are well signed.

P.S. The hardest part of writing this post, besides the spelling of the Icelandic words, was limiting the number of pictures! We have so many fantastic photos from our stopover in Iceland it was hard to choose!

This is the fourth installment in our series of great stopover destinations around the world- previous destinations include New York, London and Los Angeles.