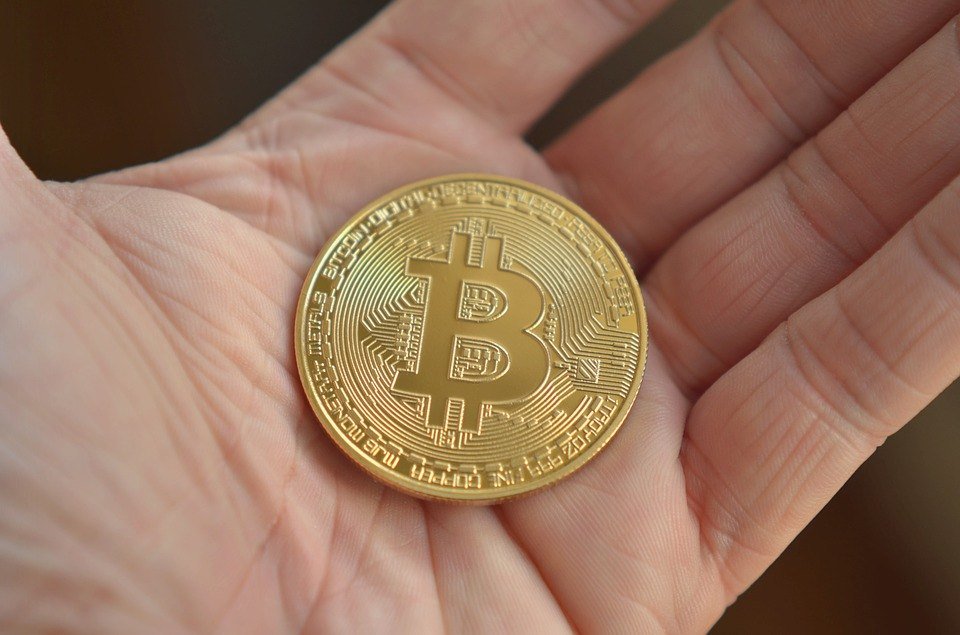 A few weeks ago on CNBC, an analyst compared the Bitcoin bubble to the early internet bubble.

We’ve been saying that since late December 2017, when Bitcoin was just starting to crash.

And oh, did it crash.

It dropped 37 percent in just two weeks from December 16 through December 30.

After a brief bounce—there was another 63 percent drop into February 5, 2018. In less than two months, it was down 69 percent from the top.

I’ve never seen that before, but I know how quickly bubbles first burst when they finally do.

Seeing as it’s old news to us that the two big bubbles are similar, let’s recap what we see.

The similarities to the internet

I’ve warned about what happens when bubbles first burst and why to get out a bit early, rather than a bit late. They suck everyone in, then the smart money pulls the plug.

My argument from the beginning was that Bitcoin’s a major new trend. It’s like the internet 2.0.

Kevin Ashton, a keynote speaker at our Irrational Economic Summit, coined the term “The Internet of Things.” How does the internet account for things of value and protect their security? That’s what it is failing at after exploding knowledge and communication for information.

Bitcoin had its first bubble based on nothing but a vision, albeit a real one down the road. You get invisible coins—which don’t give you ownership of the company.

The first internet bubble saw stocks with little sales and almost no earnings soar for no good reason, except that “this was the next big thing.”

And it was. But not until many years and almost two decades later.

Look at this chart based on the internet index back to 1997 compared to Bitcoin in recent years. 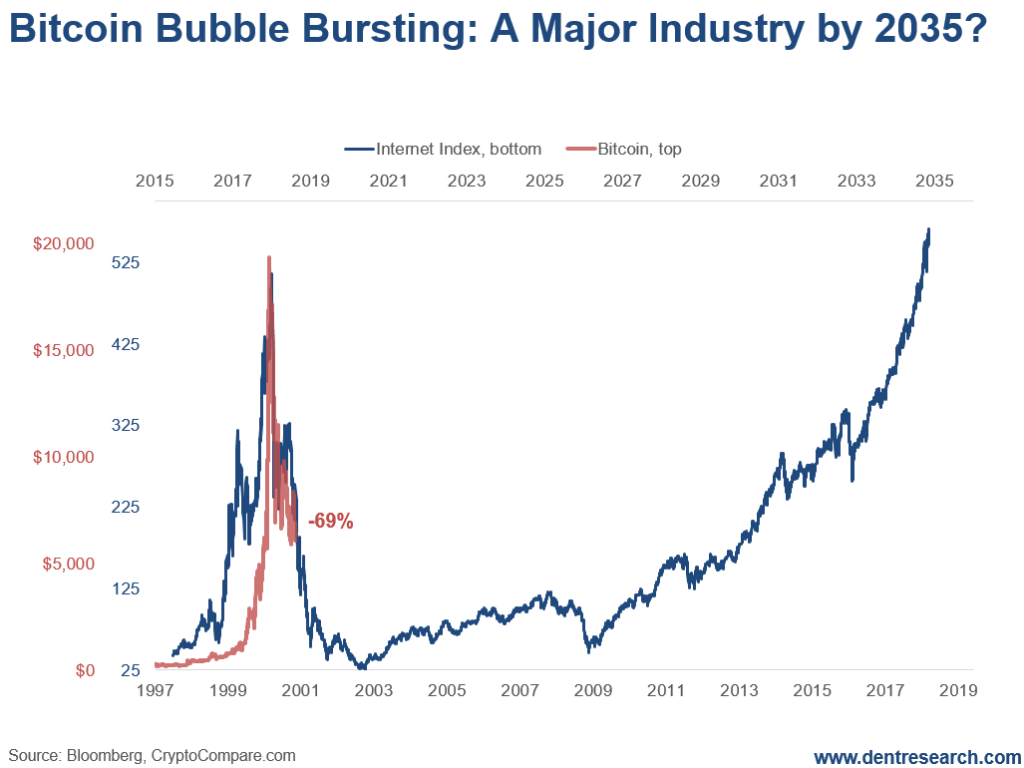 As most will remember, these early internet stocks made little in sales. Rarely did they have profits… What?

Yet they got stratospheric valuations right off the bat (400 times earnings for AOL). Internet stocks rose seven times in just 1.4 years between late 1998 and early 2000, then crashed 956 percent.

The second whack was down 83 percent from December 5 into April 3, 2001—just four months—and down 91 percent from the top.

The internet index was slow to come back at first, but a second bubble developed after the March 2009 bottom.

That would have been the trend to buy into.

It took 18 years for the 2000 bubble highs on the internet to be exceeded. If Bitcoin follows a similar path, it would hit new highs by 2035.

It’s amazing—and just bat-shit crazy—that investors would so heavily value a new sector, in its infancy, at what it will be worth in its maturity decades later!

Bitcoin made the internet bubble look like a child’s play. It only emerged in the late stage of this bubble, like the internet did in the late 1994—early 2000 tech bubble. And it skyrocketed about 20 times in less than one year in 2017.

Bitcoin: Harry warned you before

I’ve warned before about Bitcoin testing its major support since the July 1 lows of $5,537 and other lows back into the latter part of 2017.

That’s also around its current mining cost. A sharp break below there could take Bitcoin down to its bubble origin around $1,000, similar to the 95 percent crash of the internet.

However, I have also commented that Bitcoin and cryptocurrencies are acting a bit more like the gold bubble.

Gold did finally burst big time in early 2013 and has continued to mostly drift down ever since. It bounced back to $1,375, which we warned about but said it was only a bear market bounce.

But gold has not burst as fast or deep as most other bubbles at this stage and will, at worst, retest the 2008 crash lows around $700. I see less likelihood for that $400-$450 bubble origin retest.

It should be clear by now that this is not a game for everyday investors.

And one not even for most traders.

I’d look to buying the best remaining cryptocurrencies and companies when the next broader stock and tech crash appears to be bottoming, likely somewhere between 2020 and 2022. They’ll be far and few by then.

Recently, I wrote in Economy & Markets about Turkey and the trouble it faced with its current government.

Erdoğan was meant to modernize the nation. Instead, he’s ruined its economy.

The reason for this is tied to Moody’s—a rating agency—decision to downgrade the credit rating of 20 Turkish financial institutions.

It all comes about due to the higher risk, which is bound to happen when a currency crashes!

But it’s not merely a fault on Erdoğan’s part—even if he had a heavy hand in the situation. The issues in Turkey started coming to light when Trump smacked a number of sanctions against Turkey as an act of retaliation when they refused to release Andrew Brunson, an American pastor who was held by Turkish authorities due to the belief of his support for the Kurdistan Workers Party and the Gulenist movement.

Both of these parties came about due to the failed coup against Erdoğan.

After knowing the lira dropped more than 40 percent, who could blame them for trying.

We’ll be watching Turkey closely as the situation continues to unfold.