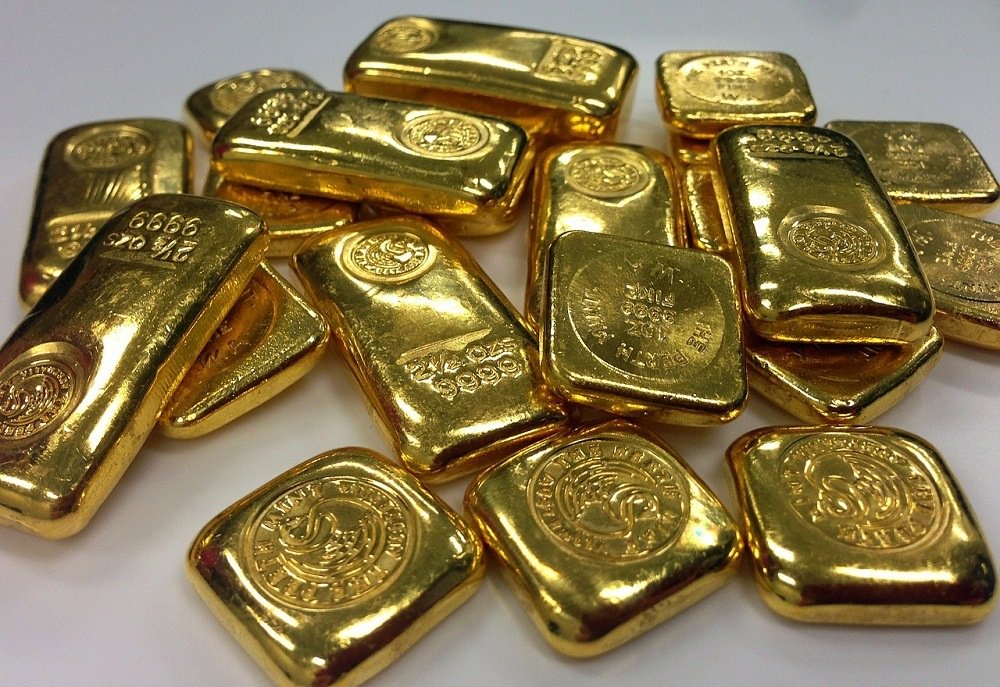 BBC announced that millions of dollars in gold at the national bank of Ethiopia has ended up being fake. What were supposed to be bars of gold ended up being simply gold-plated steel.

There are two states that call Gold their state mineral, name them.

My interview on the pending NTR story that is developing now

According to the analysts at Standard Chartered, the relative strength index (RSI) implies that gold prices are overbought at the moment which could stall prices in coming sessions. “Speculative positioning in gold is at its highest since the US election, with gross long positions at November 2016 highs and gross short positions at November 2016 lows. Net fund length as a percentage of open interest has risen to 31% from a low of 8% at the start of the year; however, positioning is still well below the peak of 48% reached in 2011, and 47% reached last year. Gold Exchange Traded Product (ETP) flows have reached 21t already taking YTD flows to 77t; however, total metal held in trust (1,854t) is well below last year’s intra-year high above 2,000t. Thus, market positioning has already picked up and price gains have slowed. However, there is still room for a further increase given the positive sentiment towards gold.”

Silver shines so far in 2017 but record positioning could mean correction/Scrap Register:

“Precious metals were the best-performing commodity class during Q1, and silver and palladium increased more than the rest,” the British bank added. “Year-to-date, silver has returned 15%, assisted by a weaker dollar and weaker rates.” Although silver may have some room to run, managed-money positioning has hit record levels, and this combined with price action, suggests that upside price momentum is stalling and silver could correct lower.

Russia added around 800,000 oz. (25 MT) of gold to its official reserves in March, data released by the country’s central bank indicated Thursday. The figure is up from 300,000 oz. (9 MT) reported in February, but below 1 million oz. (31 MT) for January. Russia’s central bank reports gold reserves initially in monetary value before releasing the volume on the International Monetary Fund website at a later date, but additions can be calculated using the month-end London Bullion Market Association gold price.

The price of platinum has gained 9% this year from $905.70 on Dec. 30, 2016, to $987.60. These returns top the Dow Jones Industrial Average’s gain of 4.1% over the same period. Last year, only 168.9 metric tons of platinum were produced in the top five platinum mining nations. These include South Africa, Russia, Zimbabwe, Canada, and the United States, respectively. That output is nothing compared to the 3,100 metric tons of gold produced in 2016. This short supply will be outpaced by rising demand. According to the World Platinum Investment Council (WPIC), demand caused a fifth consecutive year of a platinum supply deficit in 2016, and 2017 is expected to be the sixth. In fact, the platinum deficit could be as much as 120,000 ounces by the end of the year. These supply-and-demand fundamentals point to much higher platinum prices this year.

Copper starts to add pressure to the downside/Reuters:

Global exchange stocks of copper have surged by around 167,000 tonnes so far, this month to 750,000 tonnes, the highest level since mid-2013.Physical premiums. The strike at the world’s largest mine, Escondida in Chile, has ended. But at 43 days it was longer than expected and, factoring in a gradual ramp-up to full production, is going to translate into some 230,000-240,000 tonnes of lost output, analysts reckon. The price patterns imply a surge in supply, triggered by the improvement in outright pricing. Further evidence comes from China, the world’s largest buyer of copper scrap, just as it is the world’s largest buyer of mine concentrates and refined metal. Scrap import volumes rose by 24 percent to 549,000 tonnes (bulk weight, not contained copper) in January-February, a noteworthy break of a long-running trend of falling imports.

Despite having made its bond payment due last week, Venezuela’s state oil company, PDVSA, remains in fire financial straits, with virtually no funds or liquidity, and regardless of the close Russia-Venezuela ties, a Russian state-run shipping company has taken a tanker of PDVSA crude “hostage” in the Caribbean over $30 million worth of unpaid shipping fees. It also shows that political allies such as Russia are losing patience with delinquent payments from Venezuela, whose obsolete tankers are struggling to export oil and even to supply fuel to the domestic market.

Two very important items that are happening that were covered very well on DG’s market insights from Walter Pehowich:

The International Monetary Fund is warning that when Brexit is finalized, it could have an unpredictable outcome, posing a risk to global financial stability. Wednesday, on a lopsided vote by British law makers, they agreed to hold snap elections on June 8th. This should give the UK’s Prime Minister Theresa May parliamentary support and gain more leverage to negotiate Britain’s withdrawal from the European community. The Prime Minister said,” A general election is the best way to strengthen Britain’s hand in the negotiations ahead.” Watch out world, as the Washington Post reported on Wednesday, the French Communist party candidate Jean-luc Melenchon is gaining in the polls in the French election to be held this Sunday. What is so interesting is the fact that Mr. Melenchon, like his opponent Ms. Le Pen, is also in favor of France reclaiming her independence from the EU. Right now, he is in third place and very close in the polls to the gentleman in second place Mr. Emmanuel Macron.

Risks events need to evolve into something bigger for gold to sustain its gains/Neils Christensen – Kitco News:

There are enough isolated risk events on the horizon to keep gold supported in the short term and could eventually drive prices through $1,300 an ounce, but if these events don’t pan out, prices could end the year back near at $1,200 an ounce, according to one precious-metals analyst. He reiterated his firm’s outlook for gold prices to average $1,250 an ounce this year. Improving risk sentiment in financial markets is already weighing on gold as prices fall from their recent five-month high. June COMEX gold futures last traded at $1,279.30 an ounce, down more than 1% on the day.

Good news, all the bad guys went to jail/BBC:

On Wednesday, the BBC reported that millions of dollars in gold at the central bank of Ethiopia has turned out to be fake: What were supposed to be bars of solid gold which turned out to be nothing more than gold-plated steel. They tried to sell the stuff to South Africa and it was sent back when the South Africans noticed this little problem. According to the news, the authorities have arrested pretty much everyone involved, from the people who sold the bank the gold, to bank officials, to the chemists responsible for testing and approving it on receipt.

Gold is the state mineral of California and Alaska.