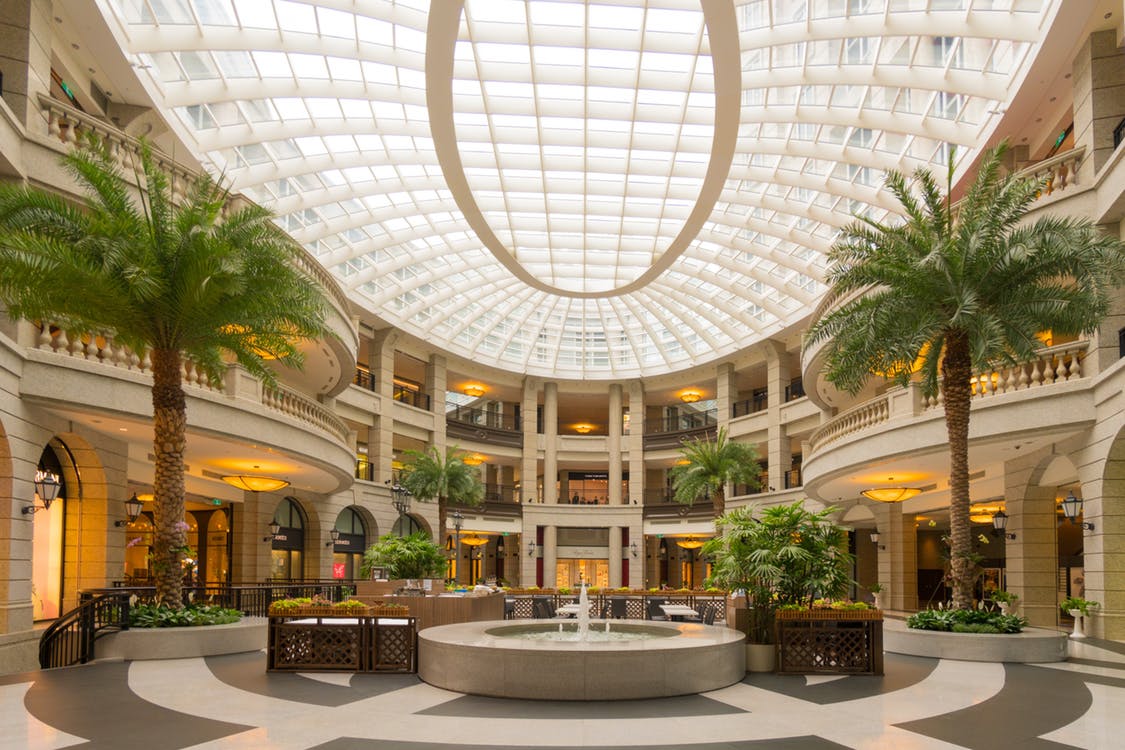 Sheets of newspaper scratch along the dusty linoleum floor as the wind beats them into the remnants of a bench… or through the open glass door and into the darkened, empty space beyond.

The air itself looks dusty.

Could this really be the future of the American mall?

Not unless we have a nuclear apocalypse!

Well, it’s bad – yes! – and it’s going to get worse, but I’m writing today to tell you it was totally predictable!

In fact, just like we forecast that Harley Davidson would suffer, so too did we forecast that retail stores would take it in the nuts as the Baby Boomers moved along their predictable spending wave!

Yes, the retail, brick-and-mortar, industry is suffering because there are too many stores… because online shopping is growing exponentially… and because shoppers are “moving toward experience…”

Yes, the Dow is still just over 21,000 likely heading towards 22,000-plus after a near-term correction. Investors still believe in the Trump magic wand of lower taxes and regulations that first, may not happen, and second will not be as big an impact as economists think because businesses are already over-expanded from the bubble boom and we are back at full employment with lower workforce growth ahead.

But there’s something so much bigger than all of these things going on, and everyone seems to be missing it!

For all the reports I’ve read on this issue… for all the analyses and insights… the mainstream media is missing what’s right in front of their noses!

The Atlantic came about as close to dammit as it could, yet still didn’t says it. The reporter wrote:

What’s up? Travel is booming. Hotel occupancy is booming. Domestic airlines have flown more passengers each year since 2010, and last year U.S. airlines set a record, with 823 million passengers. The rise of restaurants is even more dramatic. Since 2005, sales at “food services and drinking places” have grown twice as fast as all other retail spending. In 2016, for the first time ever, Americans spent more money in restaurants and bars than at grocery stores.

Yet retail stores across the country are dropping like flies.

I’ve got two words for this reporter and all the other knucklehead mainstream media:

All these retail stores closing…

It was all baked into the cake when the massive Baby Boom generation peaked in its spending in late 2007.

Here are three simple charts to prove it to you.

The first one is the overall consumer spending chart less housing to get a better fix on the retail sector, and that plateaus between age 40 when spending on housing peaks and age 51, when college tuition peaks. 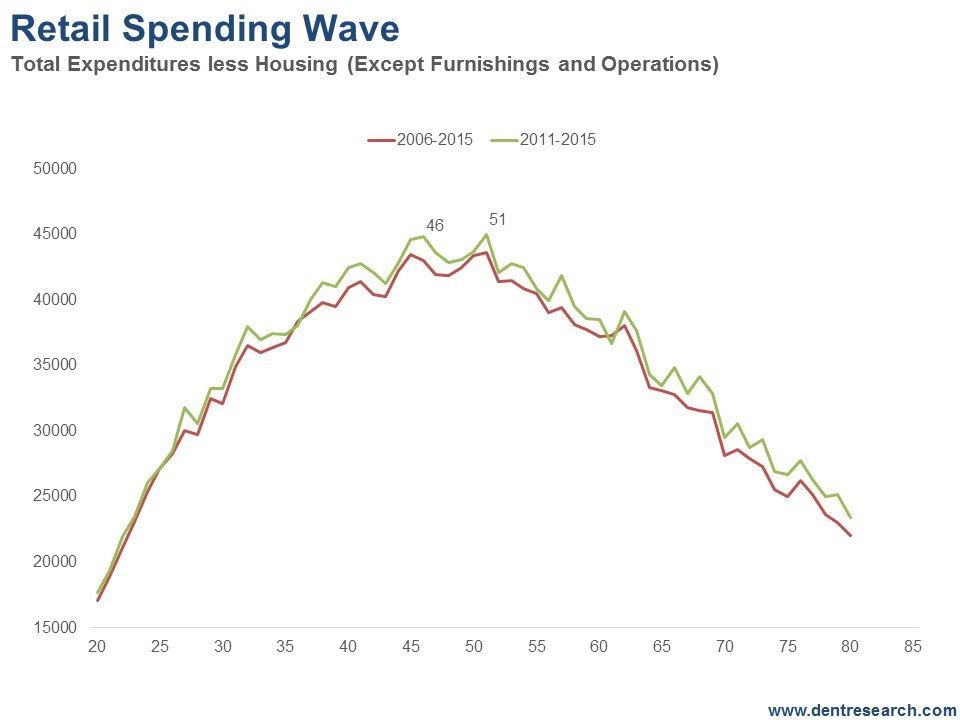 We get this data from the annual Consumer Expenditures Survey.

Spending momentum starts to slow down after people peak in their house buying, at about 40 on average. Into age 46, people spend more broadly… and into 48 on cars, which they use to drive the kids before they leave the nest.

Affluent households spend a lot until they’re about 51 years old, pumping cash into their kids and college education.

The drop-off in overall spending is dramatic after age 51. The U.S. Baby Boomer generation started turning 51 in 2012, and in Europe they hit that age in 2016.

Knowing this is good, but knowing the finer details is better…

We know that spending on apparel and related services, like dry cleaning, peaks into age 47. That means that retailers would have begun feeling the pinch back in 2008.

And if you look back at the numbers, that’s exactly when they started to struggle!

Just look at this: 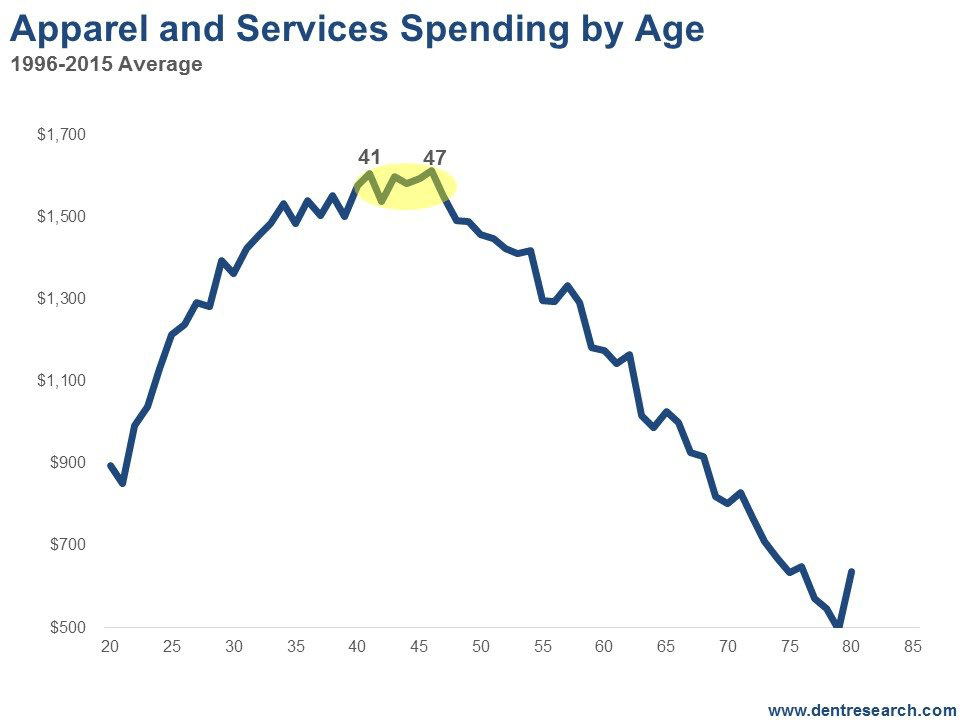 It’s no wonder that the major department stores that focus on clothing are declining!

Yes, online shopping has taken some of the pie, but for clothing retailers, that’s not as much the case. Think about it: You can’t judge the quality of a fabric or design online. You can’t try the outfit on to see how it looks or our comfortable it is.

Returns are easier today than ever before, but clothes shopping online remains challenging… especially for the discerning, affluent female (and male) shopper. (I don’t buy my clothes online!)

So, as the Baby Boomers continue their march to old age, clothing retail stores like Macy’s and JCPenny will only suck more and more wind! I’d hate to be in that industry.

But then there’s the death knell for malls and department stores: The rise of Amazon and the e-commerce sector. In this case, not only demographics plays a role, but so does technology. Look at this chart! 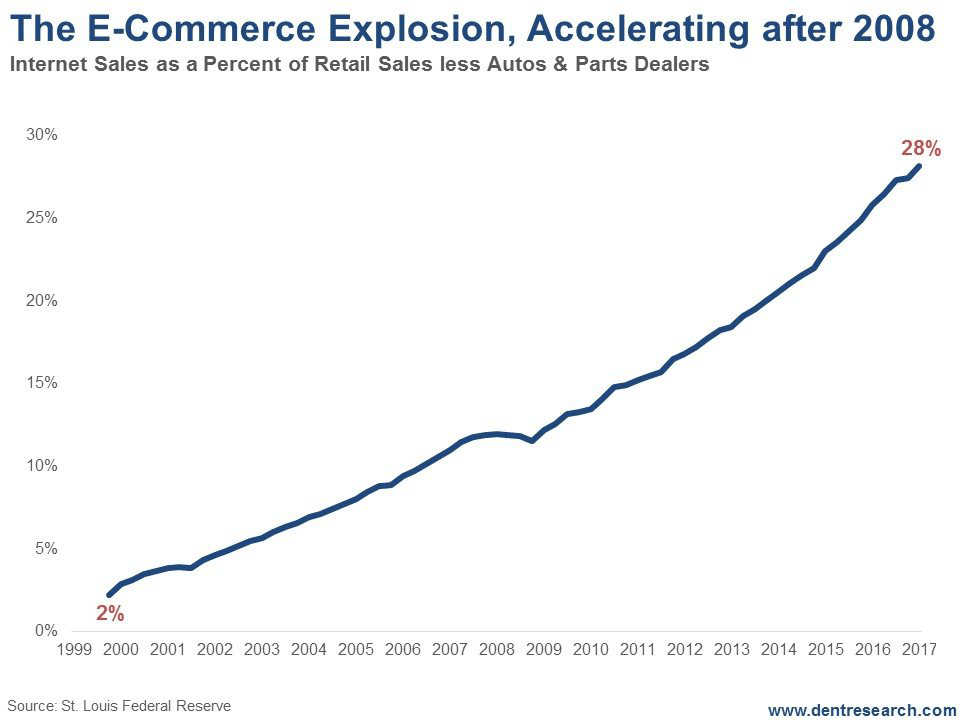 When you take out auto sales (that will eventually move to the Internet, just not yet), e-commerce has grown to a whopping 28% in early 2017.

And Amazon is now looking at both going into groceries and prescription drugs!

Malls are dead! And the clothing and discretionary food purchases were the last stronghold.

What are we going to do with all these malls?

Let them go to ruin, like something out of a “Resident Evil” movie?

One thing’s for sure, keep clothing retailers and malls out of your investment portfolios unless you’re shorting them. In which case, John Del Vecchio, our resident short-seller, can help you.