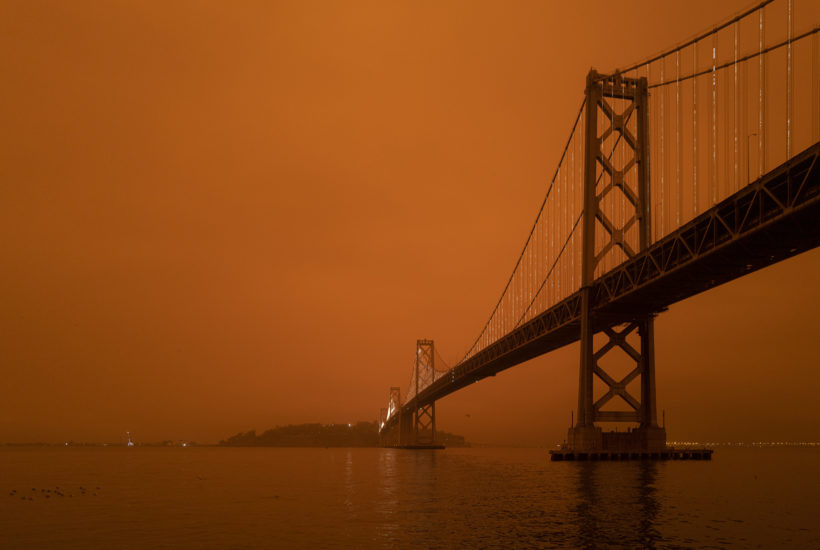 Orange skies over San Francisco may end up being the defining image of the fires that ravaged California this summer. Yet their impact was felt most keenly slightly further north. After a delayed season due to the threat of Covid-19, the fire seemed to be the last nail in the coffin for the prestigious Napa Valley Cabernet-Sauvignon harvest. Some vineyards and wineries burned, while others have merely suffered the crop-destroying ‘smoke taint.’ But all are struggling to survive and reopen what they can.

“While the skies have cleared, the full extent of the impact on the harvest, and industry, is anything but clear,” Palate Club CEO Nicolas Mendiharat told us during his visit to the area earlier this week. His words echo the general mood in the Valley: uncertainty. Yet there are some certainties in the intersection of fire and vine, many of which shed light on the fundamental vulnerabilities in the wine sector.

As well-watered living plants, with sparse or no vegetation in between, grapevines are fairly resilient to fire—they can even slow its spread—especially when compared to dry shrubs or poorly tended forests. The Glass fire revealed this in real-time, often slowing when it hit vine country or even skirting around it.

While this may not have stopped it from inflicting thousands or millions in property damage, the results could have been much worse. They might very well have been if not for the vine’s sacrifice. Unfortunately, the vines are dryer in autumn and, as the years get hotter and the fire season stretches later into the year with climate change, they may frequently become vulnerable tinder rather than expensive firebreaks.

Worse still, this potential positive side is just a reflection of a darker side of the industry. The water-heavy crop requires substantial irrigation, particularly in California’s climate. And the fragile equilibrium established means the area is particularly vulnerable to the ravages of climate change, of which the fires are but one consequence.

Some Grape Varietals like Chardonnay were Harvested Before the Glass Fire

As different varietals need to be harvested at different times of the year, the earliest were spared the worst of the late fires. For example, chardonnay grapes—that venerable source of sharp dry whites—are picked relatively early. They, and others like them, may have escaped the worst of the smoke residue and destruction.

Does this mean we will see drinkable 2020 vintages out of Napa? Inevitably some will be produced, yes. Some may even be produced with later-harvested varietals. Wineries need to stay in business after all. But customers should pay close attention to the grapes in the bottle.

Unfortunately, the harvesting of these grapes, and the few that have been saved since, has been a dangerous and risky affair, revealing some of the flaws in the modern wine industry, even here in the prestigious Napa Valley.

And that was just the good news.

SEE ALSO  Why is the stock market soaring with so much chaos?

Hundreds of brave firefighters put their lives on the line to help minimize the Glass fire’s spread, protecting property (including vines) and saving lives. But they are not the only ones who did so. Despite the area being an evacuation zone for weeks, some farmers stayed behind to try and protect buildings, crops, and cellars. Their livelihoods were already at risk, some felt they had no choice but to put their health, and lives, on the line to try and save them.

Unfortunately, some also put others’ lives at risk. Some growers went ahead with harvests even before it was safe. They tried to get as many grapes in as quickly as possible before the smoke taint set in. Heedless of the risks taken by putting workers’ lives and health in danger. Already vulnerable because of the pandemic, these workers (often Latino, sometimes undocumented) also needed the income. The harvest months can represent most of a year’s income for some families.

A stark example of some of the precarity implicit in the wine industry. The dependence on seasonal workers, their lack of protection and poor working conditions, and of course Covid-19, had already set the stage for a risky season. As workers are often housed in close quarters near the vinyards, the smoke and fire only made everything worse.

While the wine they produce is often consumed as a high-end luxury good, many vineyards still rely upon migrant, sometimes undocumented, labor. Their poor working and housing conditions have been around long before Covid and the Glass Fire shed light upon their situation. A deep irony for many of these wines now aiming to brand themselves as ethical, sustainable, or even green.

This is especially true for the bigger plantations and the growers who rely more heavily on migrant labor to scale up. But the smaller wineries faced different vulnerabilities.

Small, Family-Owned Wineries at Greatest Risk, and not just from the Glass Fire

Some of those hit worst by the flames, smoke, and season have unfortunately been those in need of the greatest protection. Small artisanal wineries that provide unique and quality vintages were many of those who lost everything in the fires. From years of production sitting in oak barrels, to entire buildings and even family histories; their struggles tug at the heartstrings, putting the spotlight on the inequalities of the wine sector.

The biggest companies in wine will have no trouble weathering this storm, with stocks to last and past years’ production to rely on. But some artisanal or family-owned businesses will lose everything. These are the same wineries most vulnerable to other vagaries of the wine markets. Those who depend most on tourism and in-person contact for sales, and often are not adapted for successful online retail.

Even those who did not suffer direct damage from the fire will have an excruciating year. Between smoke taint in their grapes (when the particulates from the smoky air settle into the skins of grapes and lend the wine an acrid or ashy taste) and lower levels of tourism because of the fires and smoke, revenues will be way down. All of which is in addition to the effects of Covid-19 decimating tourism across the state, country, and world. Tourism which these wineries depend upon.

New growers in particular rely on word of mouth, vine-side tastings, and other tourist-dependent activities to build a name for themselves. Indeed, while large established wineries and growers often dominate, the discoverability of smaller unique wineries and labels which bring variety and innovation remains a weakness of the industry. Though, thanks to some new technological tools, that is starting to change at least.

Between the Covid-19 pandemic and the fires, this year will be particularly brutal on the small winemakers who delight us year after year with innovative or traditional vintages. Some have had success turning to the internet on their own for digital sales, social media marketing or just to reach out for help.

But unfortunately, digital retail often helps the largest wineries that can mobilize the infrastructure and organization needed. But there are some companies out there trying to focus on small-scale suppliers. Palate Club, whose CEO spoke with us about the fire’s impact, is already in the region, raising awareness and creating partnerships.

Their innovative service helps pair customers with wineries by using data technology to match clients’ preferences with wines, which they then deliver. And given their focus on unique wines, boutique wineries, and sustainable practices, they provide that missing bridge between small-scale producers and palate-conscious customers.

Just how much of the Napa Valley 2020 harvest can be saved remains to be seen as the air clears and tourists slowly trickle back in. But if investors and customers react in time, the wineries themselves may not suffer the same fate as their vines, allowing the industry to recover. They may even help them overcome some of the vulnerabilities inherent in the wine industry, laid bare by the tragic Glass Fire.