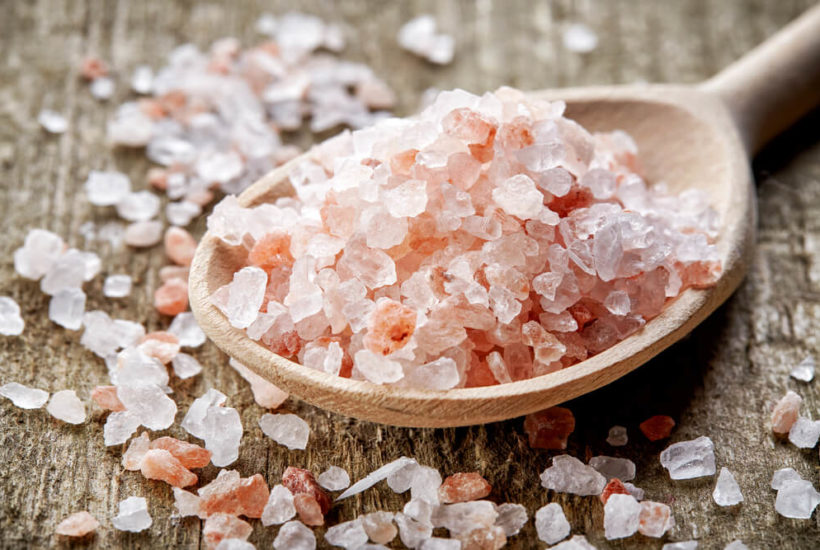 The Himalayan Pink Rock Salt is widely popular for its purported unique health properties. It is hand-mined from ancient sea salt deposits, hence believed to be the purest kind among all salt types and many enthusiasts swear by its medicinal properties. The Himalayan Pink Rock Salt has already found its way into its most mainstream consumers through the gourmet salt market.

Despite its widespread popularity, more and more scientific studies debunk the Himalayan commodity’s so-called extraordinary health benefits. In this regard, the salt is believed to be better than ordinary table salt.

Many studies have already been conducted to answer whether the Himalayan Pink Salt is as healthy as how it is presented in the market. Most especially because food and drinks and other products sold with the ingredient are being priced higher than their regular counterparts.

One famous claim about the Himalayan Pink Salt is that it contains up to 84 different minerals and trace elements. Iron is said to be the one responsible for its pink color.

An analysis in 2003 conducted on 15 Himalayan salt samples, however, found that the maximum number detected per sample was 10. The common main components detected were sodium and chlorine which are also abundant in regular rock salt. Other minerals found in Himalayan Pink Salt which were said to be absent from regular table salt are oxygen, magnesium, aluminium, silicon, sulfur, potassium, calcium, iron, and fluorine.

One Himalayan salt type is high in concentration of sulfur and oxygen with potassium, magnesium, and calcium. This type of the Himalayan Pink Salt was believed to be composed of polyhalite, a unique mineral salt which is commonly used as fertilizer.

SEE ALSO  How will changes to Facebook’s terms of service affect your business?

Even with these additional minerals found in the Himalayan Pink Salt, studies suggest that it only brings the same nutritional value to the body. This is so because these added minerals are found in extremely minute quantities. For people to take advantage of these added minerals, they would have to consume 3.7 pounds or 1.7 kilograms of Pink Himalayan salt. The thing is, the amount of Himalayan salt put in food and beverages could never be in this quantity. In the end, with only the tiny amount of Himalayan Pink Salt that people consumed, they are just getting the same health benefits found in regular table salt.

Indeed, the Food Drug Administration simply categorized the Himalayan Pink Salt as simply salt. The authority said it is safe but must be listed as an ingredient.

The Himalayan Pink Salt is mined from the Khewra Salt Mine in Pakistan. The place is near the Himalayas, hence the name of the world-famous ingredient.

Khewra Salt Mine is one of the oldest salt mines in the world. The salt deposits underneath, about 5,000 feet, were formed millions of years ago. The deposits were considered to be ancient that they need to be mined by hand.

This is the only location where there are abundant finds of Himalayan Pink Salt but the Pakistan mining industry, as a whole, is marred with controversy. Hence, no matter how massive the market for the ingredient is, the industry still failed to take off at present.

The popularity of the Himalayan Pink Salt started as far back as the year 2000 but there remain to be no significant estimates regarding its market potential. One major hurdle in Pakistan’s salt mining is the alleged government corruption which paves the way in the rise of illegal mines and forced labor.

The political conditions in the country remain to be extremely difficult to penetrate. Even foreign investments that could have given its mining industry the needed push failed to reach the deserving parties. Businessmen were also intimidated by reported widespread terrorist activities. All this resulted in questionable mining practices and low-quality infrastructure.

In the end, the question is not whether the Himalayan Pink Salt offers unique health benefits or not. It has already been categorized as one among the most in-demand gourmet salts at present as proven by its worldwide popularity. Unique or not, the ingredient is already in the market. A recent study by Global Market Insights estimated that the Gourmet Salt Markets is expected to cross the $1.5 billion thresholds by 2024.

The question is whether Pakistan is ready to leave its old practices and embrace the massive market potential its abundant commodity offers. No other countries in the world can produce export-grade Pink Himalayan Salt other than the South Asian Nation.