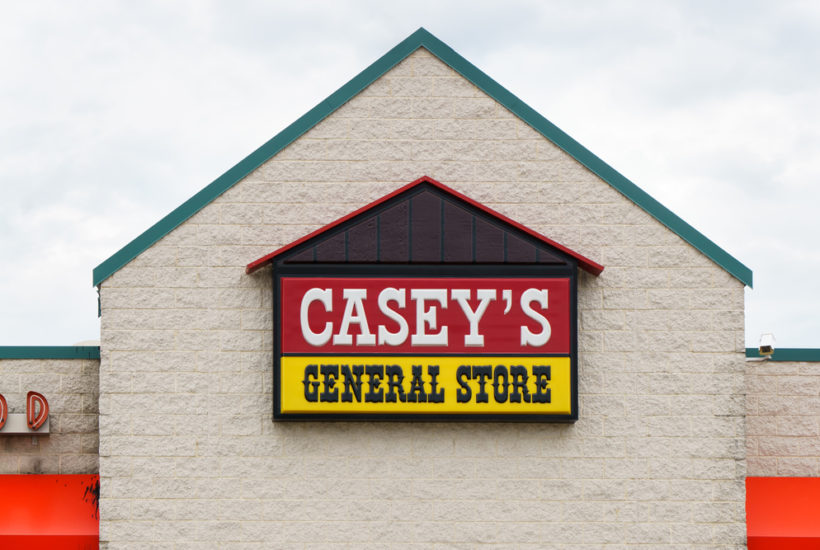 Last year has seen 7-Eleven (OTCMKTS:SVNDY) swallow Alimentation Couche-Tard Inc. (OTCMKTS:ANCUF)—an established convenience store chain, and one of their closest competitors. There are five percent fewer independent companies on the market than in 2017, and the competition has never been more fierce. How do the companies like Casey’s General Stores, Inc. (NASDAQ:CASY), Murphy USA Inc. (NYSE:MUSA) and TravelCenters of America LLC (NASDAQ:TA) innovate to outpace their rivals?

Casey’s General Stores, Inc. (NASDAQ:CASY) has a long-running business tradition, dating back to the 60s. It operates a mixture of convenience stores, pizza restaurants, and gas stations. With over 2,000 locations in 16 states in the Midwest and the South, Casey’s is a well-established chain.

The company has made some impressive upgrades to streamline their processes. Casey’s have invested in new in-store order management and revamping of their digital services. Thanks to them, ordering pizza is much more focused on customer preferences and sets new standards in the industry. With a brand new e-commerce site and fleet card program, Casey’s has extended its outreach to reach previously underserved customers.

The market is buzzing about Casey’s as the combination of margin expansion, curtailing expenses, and opening of new stores have driven substantial growth. The company has beaten expectations for its fiscal fourth quarter and provided an optimistic outlook into the coming year. The market was quick to react, and Casey’s shares have jumped 10 percent.

Revenues for the quarter ended April 2019 have broken a new record of $2.18 billion, surpassing last year’s result for the same period by almost $100 million. With total assets of $3.6 billion and roughly $460 million of liabilities, Casey’s General Stores seem to be financially fit.

The name of Murphy USA Inc. (NYSE:MUSA) should be a familiar sight for those shopping for groceries at Walmart (NYSE:WMT). The chain of gas stations and retail stores spans over 26 states and usually neighbors the parcels of the latter. Since 2016, the company has discontinued the idea of close cooperation with Walmart and started to open Murphy Express stores, located independently. Over three years, more than 240 stations were opened, bringing the total store count to almost 1,500.

As surprising as it is, the share value has gone up 10 percent since the two companies parted ways, even if Murphy USA was not focused on innovating. Building customer loyalty with fleet cards and personalized apps has become a standard nowadays, which doesn’t make the company pop enough in that matter.

SEE ALSO  5 best destinations to go to when in Morocco

Murphy USA might seem to be in trouble, as among declining gasoline prices, their revenue has been undercut. The cost of a gallon has gone down from $2.34 to $2.15 over a year, which has contributed to a 5.2 percent drop in petroleum revenue, which came in at $2.5 billion.

The company still managed to make a profit, as its merchandise sales totaled at $606.2 million, representing a growth of 6.8 percent year over year. Murphy USA was able also to profit on gas, as lower wholesale prices have been balanced by wider margins and robust petrol sales, which rose 3.9 percent year over year.

With a market capitalization of $145 million, TravelCenters of America LLC (NASDAQ:TA) is a moderately-sized stock, when compared to the previous two. Nonetheless, with a presence in 43 U.S. states, this truck stop operator has built quite a reputable brand over the years.

The company has attempted to address the growing need for expanded remote maintenance and repair services, which are the current hot topics in the trucking world. By increasing their fleet of TechOn-SITE vehicles to over 200 units, TA can effectively service idle trucks and trailers on remote lots, and bring them to working condition before the driver arrives.

TA is in the process of conversion between an LLC and a corporation, which should make its stock accessible for a broader group of investors. The company states that the conversion will be finished before the end of 2019.

Meanwhile, the company posted net losses of $12.7 million—more than 25 percent last year in the same quarter. Even though fuel volume increased by three percent in the same time, fuel revenues dropped by 0.3 percent due to declining market prices. TA was successful in increasing their non-fuel revenues by four percent, which holds a promise that once gasoline prices bounce back, TravelCenters of America will be back on track.

A surge in convenience

While the mentioned companies are more or less effective in driving innovations and converting them into revenue, there is another company that has the potential to transform their workflow.

Surge Holdings, Inc. (OTCMKTS:SURG) aims to overhaul the supply chain by offering a cutting-edge virtual distribution hub for retailers and manufacturers alike. Thanks to the SurgePays™ proprietary network, retailers can obtain seamless access to global products, empowering both supermarkets and corner stores with a vast selection of wholesale goods.

By becoming profit partners, an independent retailer can start to select, order, and fulfill the delivery of goods from around the country. SurgePays™ drive profits and efficiency by providing better access to the supply chain, enabling digital payments, and leveraging blockchain technology to ensure unprecedented security.

SurgePays™ also serves the manufacturers by furnishing both small and established companies with nationwide exposure. Thanks to becoming a part of AATAC Partnership—a private trade association spanning over 110,000 across the U.S.—Surge Holdings plans to establish services at up to 40,000 locations within the first year of operations.

Just like Alibaba has brought consumers closer to manufacturers, Surge Holdings aspires to become the “Amazon of retail” and provide multiple businesses with the functionality of the future.

Innovation is driven by emerging competitors

Even if the described retailers are not much inclined to innovate in their interactions with customers, there is still a lot of space to improve their inner workings. With smart solutions like SurgePays™, both profitable ventures, as well as those currently below the line, can increase their margins and possibly improve the suboptimal financials before more problems arise.