The history, past and present, of anthracite coal mining is laden with emotional overtones. On one side are fear and anxiety due to concerns about carbon emissions constantly pummeling the ozone layer. On the other is a hefty mixture of pride by those who see the industry as part of a noble heritage.

Three hundred years ago, anthracite served as an answer to a fast-developing industrial trend. Records from the United States Department of Labor showed that the first use of anthracite coal was in 1768. Seven years later, the first mining operations started in northeastern Pennsylvania. The inhabitants of that region realized that they were sitting on their version of a gold mine. This was largely because of a geological upheaval called the Appalachian Revolution. As described by the Explore Pennsylvania History website, it unleashed from within its bowels tonnes of coal that were more solid, pristine, and contained higher levels of carbon. 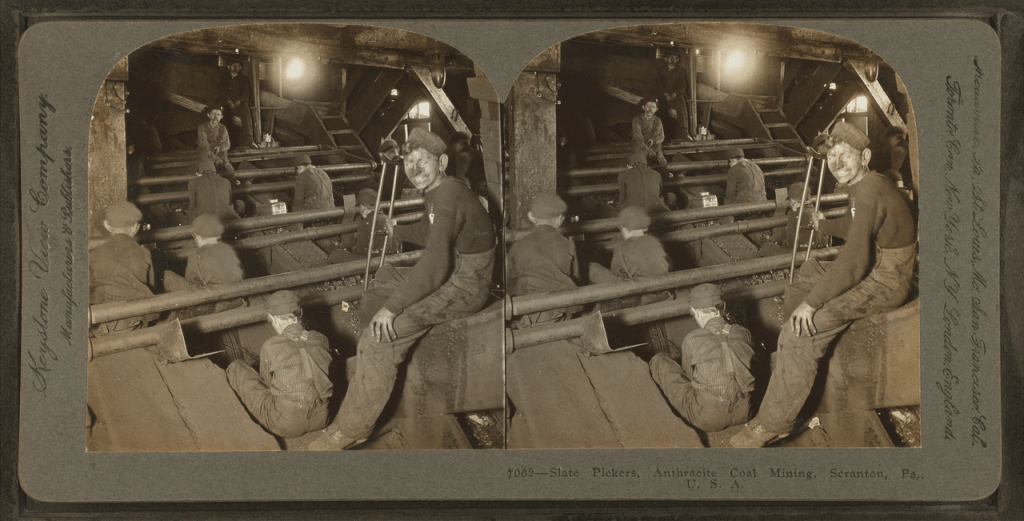 Slate pickers are picture here at an anthracite coal mine in Scranton, Pa.

This discovery accelerated the Industrial Revolution. The Revolution investors, scientists, and engineers looking for sources of fuel in the early 19th century. Wood and charcoal were the principal energy sources, but cutting down trees was not sustainable. It would also eventually prove to be dangerous, both to the environment and the surrounding communities. Tests showed that anthracite could burn far longer and  was more efficient than other kinds of coal. Soon, innovators, engineers, and their capitalist backers were studying anthracite and devising procedures that would turn it into the number one source of fuel in the U.S.

Thirty-three other states would also develop their own mining industries to dig deep and produce anthracite coal; but it was inarguable that a huge chunk of the deposits are in Pennsylvania. By 1914, employment in Pennsylvanian anthracite coal mines and their related industries peaked to 180,000 workers. These workers were supporting about 1 million more family members. Production was soaring to as high as 100 million tonnes in 1917. The industry boomed during the First and Second World Wars. Carbon critics of today might find it difficult to believe that back then, anthracite was the best source of energy. As narrated by the Pennsylvania Heritage, it produced less smoke, less ash, and a lot more units heat corresponding to the coal’s unit of weight.

SEE ALSO  When should businesses and organizations opt for an ESCO?

Decline set in during the 1970s. Employment went down to a few thousand. Tremendous changes after its heyday significantly impacted the anthracite mining industry. The economic depression took a toll on operations and funding. Government de-industrialization efforts, the replacement of human miners with less expensive equipment, and the staunch calls of environmentalists for other sources of fuel aside from carbon slowed down the industry’s wheels and laid off thousands of workers. The pain was acute to generations of miners and their families. Beyond the loss of a paycheck, the decline also felt like a betrayal of the heroic efforts of their grandfathers, fathers, and brothers who had carried the industry’s success on their hard-working, calloused shoulders—and many of them had paid for it with their lives.

Yet to say that the anthracite industry itself has reached a dead end is misleading, say some of its champions today. Twenty-three billion tonnes of anthracite had been discovered in Pennsylvania during the very early pioneering years; of that number, 12 billion tonnes are still lying underground, waiting to be mined. The demands have not ceased either. Power plants all over the world still require anthracite coal for energy production, especially those among emerging countries that may not be able to afford more sophisticated sources of fuel. Anthracite supporters maintain that the mineral can still power a lot of industries and provide energy to global locations. Coal producers have adopted responsible ways of mining procedures and production to protect the environment and reduce, if not eliminate, pollution emissions.

“Anthracite coal remains as vital to the industries and the business landscape of the 21st century as it was during the days when Pennsylvania was still opening its first mines,” says James Robert Todhunter, President of AIM Exploration Inc. (OTCQB: AEXE), a dynamic rising newcomer in the mining, refining, and development of anthracite coal. Headquartered in Nevada, its operations focus on global mining and exploration. The company currently has two existing projects. It owns a 40% interest in a feldspar mine in the Philippines and an anthracite coal project located in Peru.

“We continue to receive orders from energy providers from all parts of the world, from the U.S., Asia, Europe, and the Middle East,” Todhunter says. “We partner with the local communities in the countries where our mines are located to make sure that the mining is environmentally friendly and benefit the communities. There is a future in anthracite coal mining, and we are proud to be part of a heritage that has built nations and provided livelihood and support for families.”

Other mining companies in Australia and Canada continue their operations, buoyed by the high price of anthracite. Some of them have invested as much as $600 million in one mining operations. The venture has a reason for optimism. Anthracite currently sells at $175 per tonnes while others do for $90 per tonnes, according to Mining Weekly.

The industry’s founding fathers may be struggling, but anthracite coal mining shows no signs of abating elsewhere. Given enough time, the industry might witness a resurgence. With it, a brighter future for the miners of the new generation will also come.