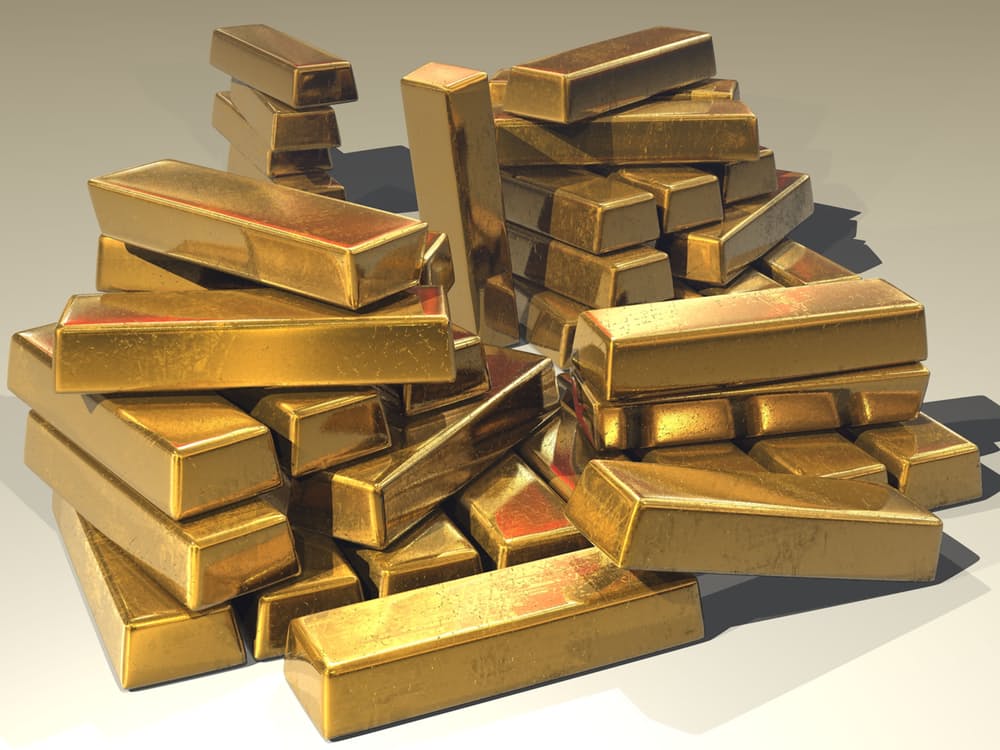 The gold and silver producers made a blistering start to the year. The second half has been a totally different story.

The chart below depicts the rise and fall of the gold producers which make up the Gold Bugs Index the HUI. This Index has now fallen 60% from its recent high of 282 which suggests to us that the selling pressure should be just about exhausted. Overall the HUI remains some 72.2% off its high (630-175) made in 2011, so there is plenty of room for the stocks to rise once gold resumes its bull market.

The chart shows that a Cross of Death has been formed as the 50dma penetrates the 200dma in a downward motion which is usually interpreted as a more negative action to follow. However, this is not always the case as a lot of damage has already been done prior to the formation of this crossover. We can also see that the technical indicators are now in the oversold zone suggesting that a correction is on the cards There is a myriad of reasons for the volatile behavior in the precious metals sector and this post can’t cover all of them but hopefully will reflect some of the reasons that we view as important. 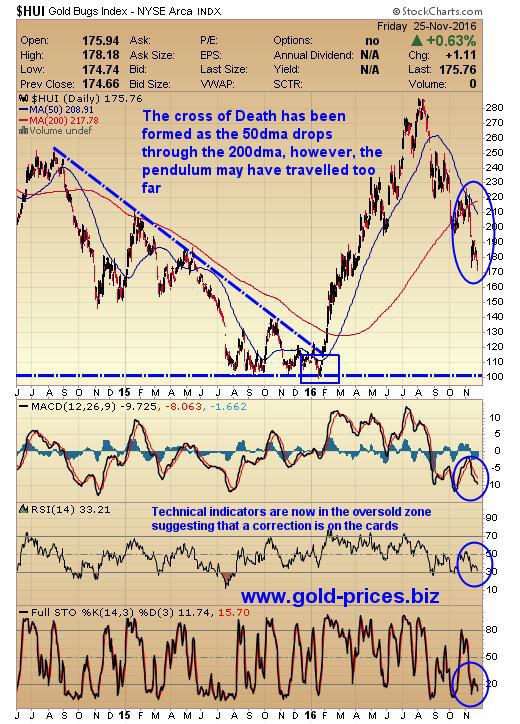 We start with India, one of the world’s biggest importers of gold with annual demand of up to 1,000 tons. It is alleged that some of it is paid for with black money which has attracted the attention of the Tax Department. The authorities have now withdrawn higher denomination notes, in order to disrupt cash funded gold smuggling. This looks to be a bit more than just saber rattling so we will monitor the situation as it develops, but I doubt that gold imports will be banned completely. We do need to be aware that a lot of governments are desperate for cash and these actions could form part of the answer to their problems. On the other hand, the threat of a ban may well cause a surge in buying, just as gun sales went up whenever President Obama talked about new controls.

The US election has produced a maverick in the form of President-elect Donald Trump. The markets would appear to believe his election promise of rebuilding the infrastructure as the dollar has surged as investment funds flow through into the stock market. The DOW has now surpassed the 19000 mark to register a new all-time high, maybe in readiness for a Trump generated economic boom. All of these new projects will require funding so sooner or later the printing press will need to swirl even faster than it does now, which in turn will dilute the value of the dollar. At the moment the technical indicators for the dollar; MACD, RSI and the STO are all in the overbought zone, so it should take a breather shortly, which may help gold to get off the ropes.

Monetary policy still casts its shadow of the precious metals sector with the next meeting of the FOMC scheduled for 13/14th of December 2016 when the markets expect to see a rate hike, so it almost baked into the cake. A rate hike isn’t good for gold as the dollars inverse relationship with gold tells us that when the dollar goes up, gold goes down. However, the important thing to look for is the narrative by Janet Yellen in the Feds press conference. If this is perceived to be of a softer tone, then it may be some time before we get another rate hike thus allowing gold to move to higher ground. This could be the turning point for gold and act as an ignition for the resumption of the gold bull market.

The price of gold as we write is approximately at $1178/oz, which is about $200/oz lower than its June peak of $1375/oz. The RSI is down to 20.63 which is the lowest it has been for some time. A reading below the ‘30’ level is usually considered to be oversold so we can see that gold is extremely oversold and a bounce from here is not impossible.

The US Dollar is not the ‘Dead Cat’ just yet as many of the other major currencies look to be in worse shape thus investors have a preference for the dollar. The rally in precious metals has corrected hard which is not all that unusual for any bull market. The wall of worry will still need to be climbed as the volatility ramps up and the oscillations become even wilder than they have been recently.

We have just witnessed the political norm being shattered with Brexit and the Trump victory. This is symptomatic of the general feeling that all is not well and the whiff of revolution is in the air. The next political shoe to fall could be France where their current president is one of the most unpopular of all time. Alain Juppé has conceded defeat to François Fillon in the rightwing primary. Fillon is considered by many to be similar to Margaret Thatcher in that he has promised to shrink the French state. He still has to beat Marine Le Pen who is convinced that the same resentment which saw the Brits reject the EU could sweep her to power, as unlikely as this may seem.

As this distrust gains momentum the populous will look to protect their own wealth and the establishment does not endear itself to them hence alternative forms of protection will be short and precious metals sector will be in that frame. Some of our readers will be aware that we acquired both gold and silver some years ago and today our main focus is on the mining stocks. Our position is that we are firmly in the camp that believes that a long-term gold bull market is now unfolding. The volatility that we have experienced is about to go on steroids as the intensity of this white knuckle ride goes into overdrive. We have increased our long positions in the precious metals sector to 70% with the other 30% in dollars. Volatility can be your friend and we used it starting about seven years ago through a number of well thought out option trades. During this period we generated a profit of 1358% as you can see from the trading record.

As always, go gently and only deploy small amounts of capital into each trade as a week can be a long time in the precious metals arena and we need to be able to take a knock and live to fight another day. Got a comment, then please fire it in whether you agree with us or not, as the more diverse comments we get the more balance we will have in this debate and hopefully our trading decisions will be better informed and more profitable.