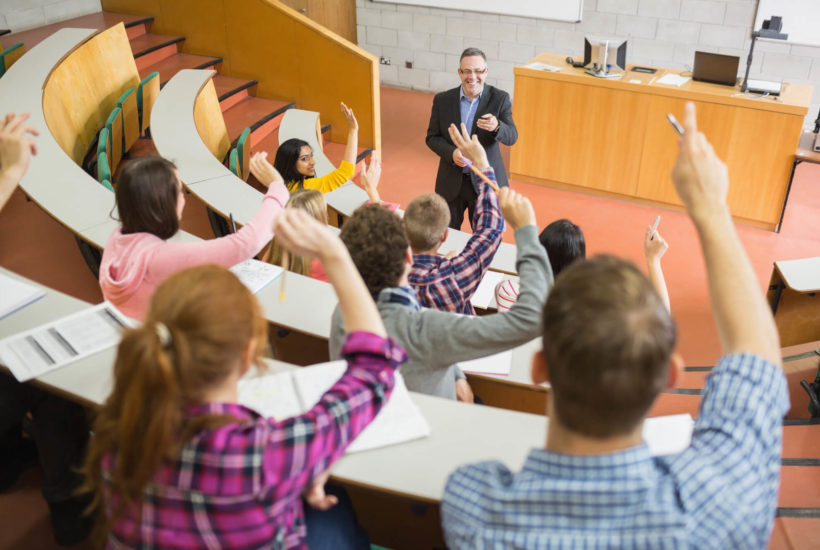 Student enrollment in colleges and universities throughout the U.S. continues to grow. Data tells us that no matter what the economy does, young men and women realize the importance of getting a degree. Statistics from the Institute of Education Services point to the fact that even during the Great Recession from 2007-2009, student enrollments maintained a level constant as young men and women entered or re-entered institutions of higher education.

Because of the high demand, thousands of options await and university leaders compete aggressively for new students. To be successful, it is extremely important for educational institutions to offer attractive facilities, appealing campuses, enticing living quarters, quality food choices, and access to entertainment. There is no hard and fast statistic that denotes what students prioritize first, but it is obvious that most want state-of-the-art facilities. That fact is resulting in thousands of new opportunities for contractors of all types.

Officials at the University of North Texas’ Frisco campus recently announced that talks are underway to launch a number of significant campus renovations that are designed to catch the attention of prospective students. The university is attempting, in conjunction with private-sector partners and investors, to connect the campus to the Fields development, which will be home to the National Golfers’ Association of America as well as a new city park which is in the planning stages now.

Other campus upgrades are outlined in the campus’ master plan including a new student housing facility, additional parking, and more. Officials hope to have some parts of this major plan finalized and ready for use by 2023.

The University of Texas at San Antonio (UTSA) will seek funding partners for new projects on its Downtown Campus expansion. The College of Business is the centerpiece and first phase of the University’s 10-year expansion plan. UTSA was unsuccessful in obtaining state funding. However, officials believe alternative funding of $126 million is possible and will seek a public-private partnership engagement. Additional funding may come through philanthropic support.

University Regents at the University of Houston System have approved $78 million in funding for a new $90 million law school. The college plans to raise an additional $12 million from other sources. The new five-story building will feature an event space, courtroom, state-of-the-art classrooms, a library encompassing two floors, and a pro bono legal services area.

Dakota State University is about to launch a new $42 million sports complex project. The university recently received a $10 million donation which allows phase one of the project to begin. The three-phase project will feature an events center, an indoor training facility, outdoor sports complex, and a shared two-level building concourse that will become one consolidated complex. The outdoor area will have fields for football, soccer, track, softball, and baseball. Also included in the project are renovations of the fieldhouse and additional parking. There is no doubt that the new complex will be an enticement to prospective students.

The College of Charleston, South Carolina, soon will undergo a $50 million renovation to its Albert Simons Center, which is home to the School of Arts. The project’s launch, scheduled for 2020, will include a new 80,000-square-foot facility, new classrooms, restrooms, a black box theater, and upgraded HVAC and power stations. Plans also call for the rebuilding of 15,000 square feet, the addition of another 10,000 square feet and renovation of 65,000 square feet. This, too, will be an attractive draw to prospective students.

Mt. San Antonio College in California has announced plans to begin the design phase of a new four-story Technology and Health Building. The $120-million project is part of an overall $750 million bond package that passed in November 2018. The new facility will include classrooms, a laboratory, numerous offices, a library, and student study spaces. The new facility will house support services, which are now spread out across six locations.

The North Hennepin Community College and the Metropolitan State University have announced a partnership with the city of Brooklyn Park, Minnesota, to build an $85 million Center for Innovation and the Arts. The new facility will be an 83,130-square-foot building. It will accommodate the named partners as well as local schools in the area.

The building will include an art studio, a black box theater, classrooms, dance studio space, a public plaza, and surface-level parking. The state college system will provide bond funding for its portion of the project.

The Georgia Institute of Technology announced in August that it soon will launch the third phase of development of its Tech Square in midtown Atlanta. Phase III will include two new high-rise facilities for the Ernest Scheller Jr. College of Business and the H. Milton Stewart School of Industrial and Systems Engineering.

Other components of the project include the construction of a pedestrian plaza and the development of street-level retail. Project cost estimates are $200 million. Planning and design will begin soon, and construction could start as early as 2020. Officials have announced that the planned opening of the towers is slated for 2022.

The University of Idaho has announced plans to build the largest research dairy in the U.S. Approximately 640 acres have been selected for the project. It will also include a demonstration farm and an agro-tourism center. The Center for Agriculture, Food, and the Environment (CAFE) currently is being designed. The project will have three phases, with projected costs at around $45 million. Officials hope to have everything operational by 2023.

Opportunities for construction firms are in abundance with huge needs for engineering, technology, landscaping, and professional services firms. Contracting firms interested in diverse opportunities should not overlook colleges and universities.