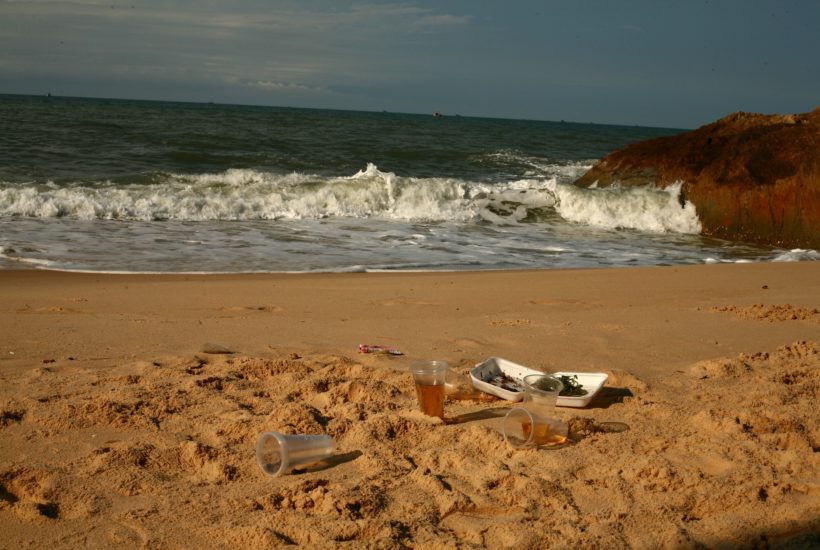 Boyan Slat knows how to create enthusiasm on the Internet. In a major event broadcast on YouTube at the end of October 2019, the Dutchman unveiled the so-called Interceptor, a kind of floating assembly line in gigaliner format, with great pomp. It is designed to collect plastic waste from rivers before it can be discharged into the sea. In the powerful advertising presentation, the Interceptor swallowed thousands of bath ducks from the current of a water basin.

If you want to find more details about the plans Ocean Cleanup has in order to reduce the amount of plastics in the oceans and to read the most important financial news in the world, download for free the Born2Invest mobile app.

Test operation in Indonesia and Malaysia

Not far away, in Rotterdam’s museum harbour, Interceptor number four is waiting for delivery to the Dominican Republic. The first two plastic swallowers have been in test operation in Indonesia and Malaysia since the end of last year, while the third Interceptor is awaiting official approval in Vietnam. Paperwork is one of the main tasks of Chris Worp, the Foundation’s manager.

“How do I explain what this is? Is it a ship? No, not a ship. But I have to classify it as something so it can be imported. This is one of the daily challenges we have to overcome.”

Worp proudly presented the Interceptor’s brand-new technology. Floating barriers are designed to force plastic waste into the mouth of the garbage chute. Its conveyor belt transports the waste into containers, which are then brought to shore in barges. Solar power provides the necessary energy.

All this is controlled by a computer, which is always connected to the central office in Rotterdam via the Internet. “Here is the main screen. On it you can see the status of the entire system, whether any problems have been detected. When the bins are full, it sends an SMS to pick them up and empty them.”

First experiences in Indonesia are sobering

The first copies of the Interceptor each cost $786,000 (€700,000), and the price is expected to drop significantly with the start of series production. An Interceptor can remove up to 50 tons of waste per day, according to Ocean Cleanup.

However, the first experiences in Indonesia are sobering. Less than two tons were produced there, and two-thirds of it was not plastic at all, but mainly water plants. This was reported in the local press with reference to Ocean Cleanup and its sponsor Danone.

That is problematic for ecological reasons. The biomass on the surface of rivers is an important habitat, explained biologist Lars Gutow from the Alfred Wegener Institute in Bremerhaven.

“One must always bear in mind the marine areas in front of river mouths – these systems are designed to receive material from the inland via the rivers, biological material. And this material is then also filtered out. We still have no idea what collateral damage this procedure will cause, nor do we know how efficient it will actually be in the end.”

What is clear is that between a quarter and a half of the new plastic that ends up in the sea comes from the mouths of only ten rivers, two of which are in Africa and the rest in Asia. This is the result of various projections. However, only part of the waste floats on the surface, the rest floats in deeper water or is too small to be collected by the Interceptor. Chris Worp is nevertheless convinced that the floating garbage chutes will become a success story. Ocean Cleanup plans to equip a thousand rivers with them over the next five years.

The company is in search for local partners

“We are very ambitious, driven by the urgency of the problem. This is going to cost a lot. But when you consider that plastic waste causes an estimated three to $19 billion worth of damage each year, we can clean up those thousand rivers for a lot less money.”

One of his main tasks now is to find local partners to take care of an Interceptor on site. To make things palatable to them, he has given the garbage chute a fashionable design in bright blue.

“First of all, everything is functional. But we have designed some elements to make the Interceptor look more appealing. People like attractive technology. If we put something really good-looking in a very dirty stream, then a river like that looks much better.”

It’s not a new idea, though. There’s been a plastic collector similar to the Interceptor in use in Baltimore Harbor for six years: Mr. Trash Wheel. Hundreds of organizations around the world clean up beaches and shorelines. Asian authorities are not idle either. In order to prevent flooding, work teams with simple equipment fish 250 tonnes of rubbish from canals and rivers every day in Indonesia’s capital Jakarta alone.

The environmental impact test is still to be carried out

Even more important are stricter laws and tighter controls on land. Because without a well-functioning waste management system, collecting waste in the water remains a Sisyphean task.

“Boyan Slat does not call himself a scientist either. Wherever he is shown, he is the CEO, i.e. the managing director of Ocean Cleanup. This is about a product, about a brand, and he sells it very well. Of course, this is also an issue that affects many people. And he takes this up and offers a solution,” said Lars Gutow.

Like most marine biologists, Lars Gutow has great sympathy for the commitment of the young Ocean Cleanup founder. Whether his concept of combating plastic waste with large and expensive technology is really appropriate to the problem remains to be seen, however.

“Of course, a rigorous test of environmental compatibility is still to be carried out and this would really have to be carried out by independent scientists and not by Ocean Cleanup, who observe what goes on there. But it would be desirable for this to be independently investigated as well.”

First published in Deutschlandfunk Kultur, a third-party contributor translated and adapted the article from the original. In case of discrepancy, the original will prevail.