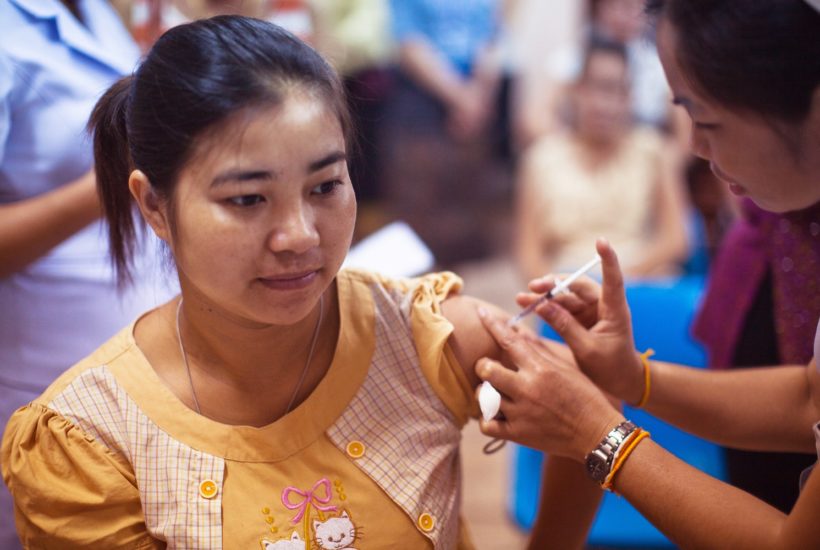 Only eleven days after the identification of a new coronavirus in China, scientists from at least three laboratories in the U.S. and one in Australia were already looking for a vaccine capable of stopping the rapid advance of the outbreak. On the 3rd of Feburary the outbreak had officially killed more peoplethan Sars.

Severe Acute Respiratory Syndrome (Sars) killed roughly 800 people between 2002 and 2003. Despite the rapid growth of the Coronavirus researchers have been able to build on previous efforts and believe an effective treatment could be developed in as a little as 12 months.

Some experts are even betting that the technological race will be able to deliver a vaccine for testing prior to the twelve-month time frame that has been set. On Thursday, January 30th, the World Health Organization (WHO), declared the coronavirus outbreak an international health emergency. Taking this into consideration there is even more push for the initiative to bring an outcome and ready product sooner rather than later.

Others are more cautious about deadlines, but all are betting on an immunizer as the best way to tackle the virus, which has reached more than 20 countries, caused 304 deaths in China, and infected 13,700 people overall. Currently, there are no specified treatments for the infection, and at best, the healthcare professionals can only work to relieve the symptoms.

The deputy director of the Vaccine Research Center at the U.S. National Institute of Health (INS), Barney Graham, said at a press conference last week: “Our efforts are first of all a response to the new virus, but also a challenge; to test how fast we can work.”

Find science and biotech news at your fingertips! Get to know about what is new in biotech with the Born2Invest mobile app. Our companion app includes news updates of business headlines from crowdfunding, to investing, and cannabis.

The Coalition for the Preparation of Innovations against Epidemics (Cepi) has allocated $11 million to three programs. They are led by the companies Moderna Biotecnologia (which works in partnership with INS), Inovio Farmacêutica, and the University of Queensland, Australia. Johnson & Johnson are also working alongside to develop an immunizing drug.

Just hours after the Chinese made the new virus genome available, INS experts were already getting to work. They compared the genetic sequence with those of the Sars and Middle East Respiratory Syndrome (Mers) viruses, all of which are from  the same family as the coronavirus. The objective was to identify proteins that facilitate the entry of the virus into the cell.

The same group had already studied these proteins in Sars and Mers viruses and used them to develop experimental vaccines against both diseases. In the end, the immunizers did not reach the pharmaceutical market because the epidemics had already been contained by the time they were ready, and as a result, the investments were suspended.

On January 14th, INS already had a model for the new virus and sent it to laboratories of Modern Biotechnology, which is working on creating a synthetic messenger RNA capable of sending instructions to the cells. This would induce the production of antibodies to fight the infection. Back at the INS, the prototype will be prepared for animal testing. If there is no setback, experts believe that the first human test can be done in three months.

At Inovio laboratories, scientists are using new types of DNA technology. They believe that in five months they will have a prototype ready for testing. And by the end of the year, they’ll be ready for large-scale testing. “Our vaccines use DNA sequences of the virus to target specific parts of the pathogen that we believe will induce a more intense response from the body,” explained the company. “We use the patient’s own cells, turning them into a vaccine factory.”

At Johnson & Johnson, experts use adenovirus, which causes flu-like symptoms. Thus, they induce the body to produce antibodies to similar invading viruses. At the University of Queensland, synthetic molecules that mimic the structure of the virus are being tested. For Mayra Moura, director of the Brazilian Society of Immunization, there is an expectation of getting a vaccine quickly. “We’ve already got a good road ahead,” she said. “But as much as some steps can be accelerated, there is no way to skip the test steps in animals and human beings.”

WHO coordinates the process and will decide which “candidate” the vaccine should be tested in humans first. Historically, vaccines are the best tool to prevent disease, but there are still challenges. Developing a vaccine is still expensive and risky.

“If the virus is still circulating, surely the vaccine is the best solution,” said Mayra. “In addition to protecting individuals, large-scale vaccination induces what we call collective protection, preventing the virus from circulating.”

In the meantime, there are already some drugs being tested against the coronavirus. This is the case with experimental drugs initially developed against Sars and other coronaviruses, and even a medicine used in the treatment of HIV.

Hélio Mangarinos of the Brazilian Society of Clinical Pathology said that “The vaccine will help a lot. But simple public health measures, such as isolating patients, taking care when sneezing and washing hands contribute to reducing contagion.”

Infectologist Edmilson Migowski of the Federal University of Rio (UFRJ) agreed. “During the swine flu epidemic, between 2009 and 2010, until the vaccine was made available, there was an intense campaign to wash hands,” he said. “The result was that that year, no laboratory producing serum, medicine for diarrhea, conjunctivitis or cold beat the sales goal. The simple gesture of washing hands more often reduced the incidence of illness.”

Outbreak will get worse before it gets better

Professor of Epidemiology at the University of Michigan (USA), Arnold Monto is considered one of the world’s leading experts on coronavirus. He worked in Beijing during the epidemic of Severe Acute Respiratory Syndrome (Sars) between 2002 and 2003 and was a consultant to the World Health Organization. He told the State that the current coronavirus outbreak “will get worse before it starts to get better,” but that previous experiences help to deal with the problem.

(Featured image by CDC via Unsplash)

First published in negocios, a third-party contributor translated and adapted the article from the original. In case of discrepancy, the original will prevail.